Women found under the Haaksbergen viaduct have no permanent residence | NOW 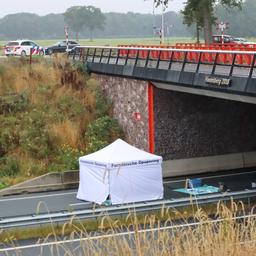 The two women who were found under a viaduct in Haaksbergen in the night from Sunday to Monday have no fixed place of residence, the police reported on Wednesday.

The deceased victim was a 62-year-old woman, police said. The seriously injured woman who has since been arrested is 36 years old. RTV Oost previously reported that the women were mother and daughter. The police are not making any statements about this.

Both women were found under a viaduct over the N18 in the night from Sunday to Monday. According to RTV Oost, the 62-year-old woman fell from the viaduct, after which she died.

The 36-year-old woman was injured in the incident and had to be taken to hospital. Police arrested her later on Monday. She is suspected of involvement in the death of the 62-year-old woman.

According to the local broadcaster, there is a rumor in Haaksbergen that both women wanted to take their own lives. The police cannot confirm this either.