Aníbal Torres resigned from the presidency of the Council of Ministers 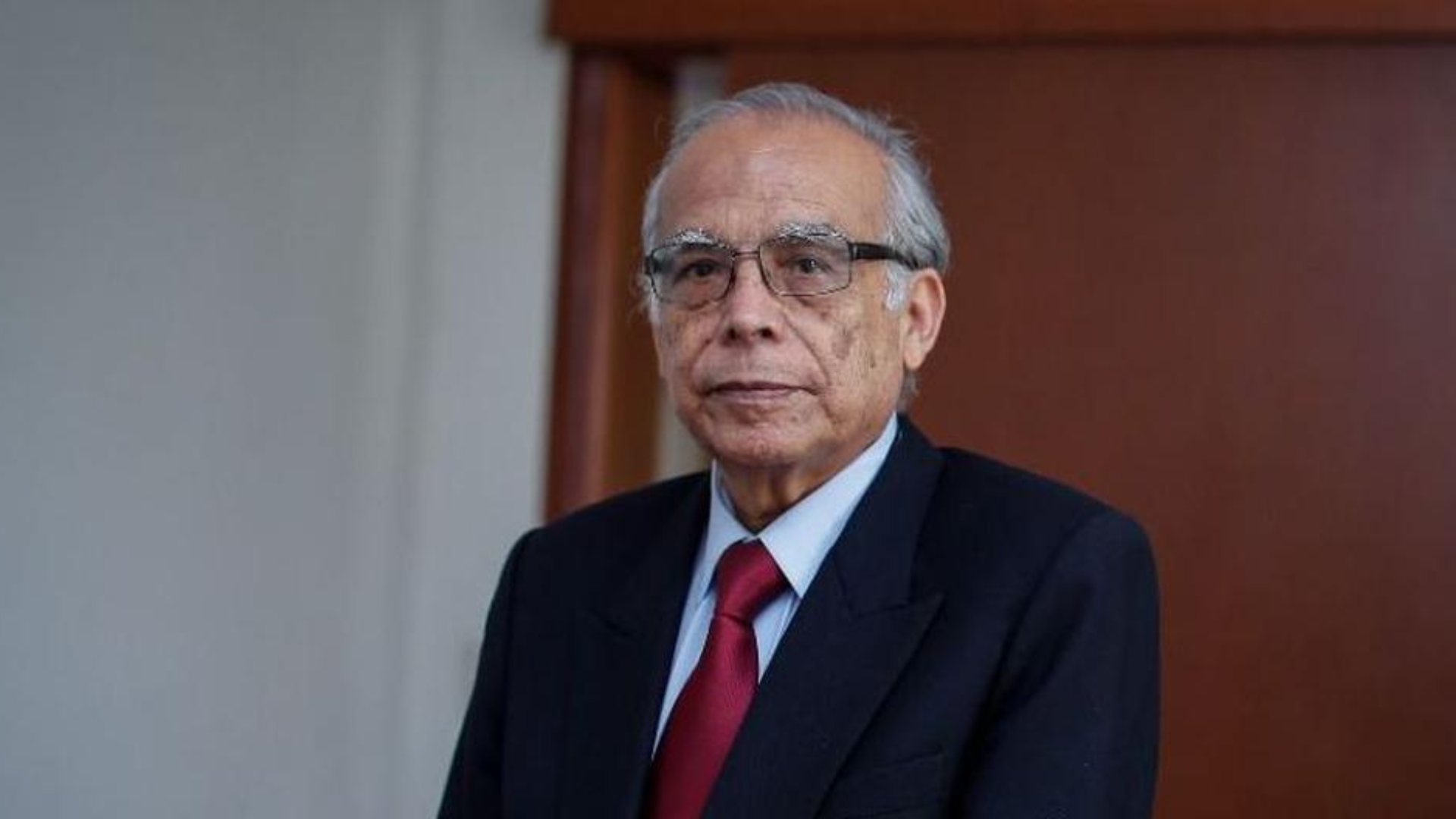 Aníbal Torres resigned from the position of President of the Council of Ministers through a letter sent to Pedro Castillo. In the letter that he published on social networks, the until now head of the PCM maintained that “for personal reasons I make myself available to him.”

“I take this opportunity to thank you for the trust placed in me, first as Minister of Justice, and then as Premier,” Torres says in part of the letter sent to the President of the Republic.

He adds that he is retiring from office “after having served, together with you, our country, especially the most neglected and forgotten people” and that “today I have to return to the university classrooms with my students, and take up what I missed the most: legal research”. 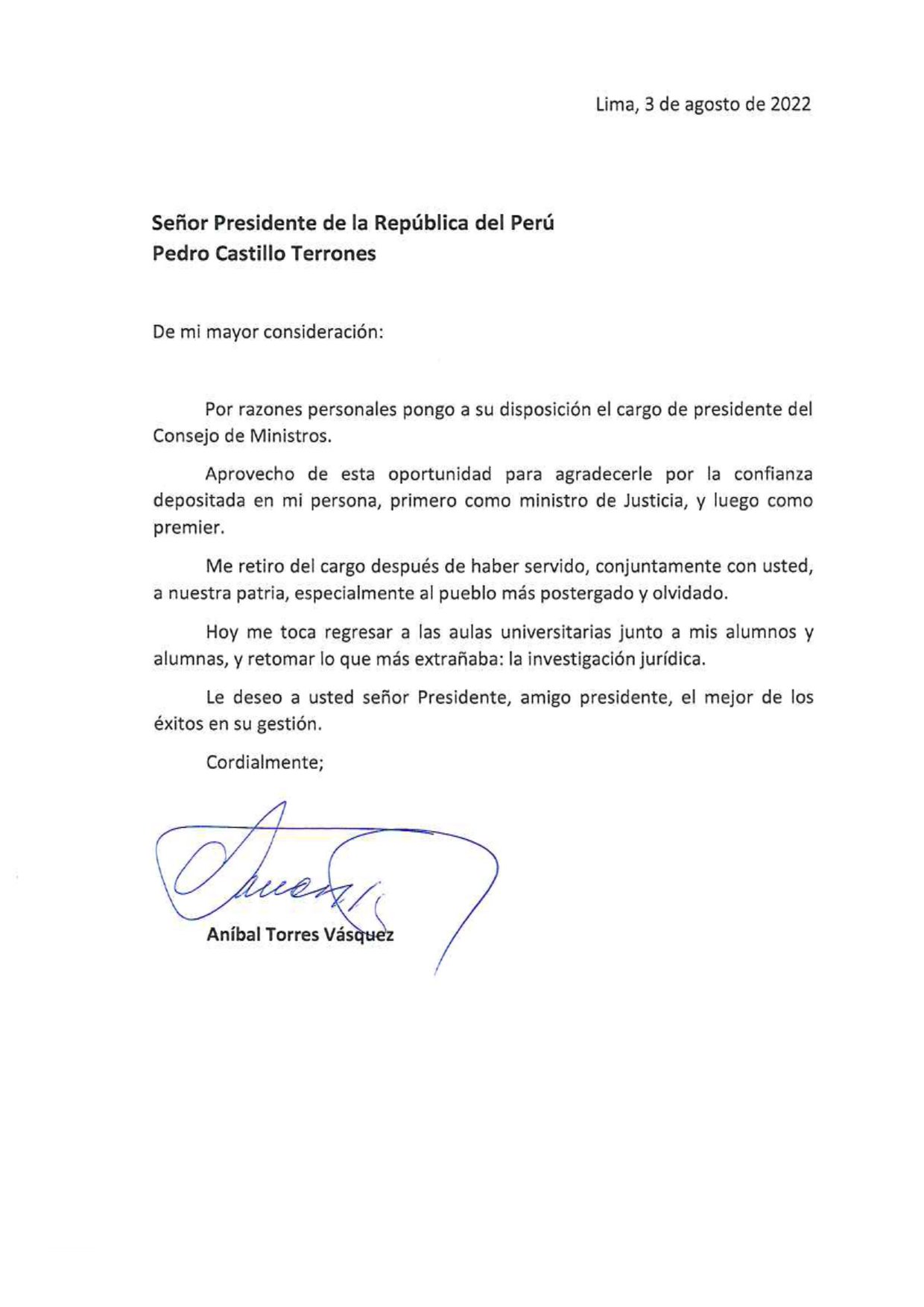 Aníbal Torres is the fourth premier to leave office amid the controversies surrounding Pedro Castillo regarding the investigations that the National Prosecutor has initiated against him accusing him of having committed various crimes together with his close entourage in the Government Palace .

Torres’ resignation is not irrevocable, so Castillo Terrones is expected to respond to the letter and, subsequently, take the oath of the new head of the PCM.

In recent days, the silence of Aníbal Torres regarding the controversy surrounding Pedro Castillo has marked the breaking point between the still president of the Council of Ministers and the president, so his distance from the government was evident.

The last time the jurist was seen next to the Peruvian president was in the protocol celebrations for the 201st anniversary of the Independence of Peru.

Aníbal Torres, during the months as president of the Council of Ministers, has been the protagonist of various controversies. One of the latest is his confrontation with Jaime Chincha, whom he described as a ‘vulgar journalist’ in the middle of a live program, as well as his constant attack on the press, believing that he “disinforms” and “decontextualizes information” . He even considered thatthey have adopted the mechanism used by Mussolini in Italy, fascism; Nazism used by Hitler in Germany, have adopted the policy of these two characters, that is, of using lies as the best instrument to destroy the adversary“, he pointed.

The head of the PCM indicated that the Peruvian capital press decontextualizes the information.

If the Head of State accepts Torres’s resignation, it is estimated that in the next few hours a new cabinet will be formed that would be headed by Juan Senmache, the former Minister of the Interior and now an advisor, with whom Castillo worked on what was his criticized message. to the Nation on July 28.

Senmache was censured by the Congress of the Republic for being identified as possibly responsible for the escape of Juan Silva and Fray López. Despite this situation, he never left the government and on several occasions he was seen entering the Government Palace to meet with Pedro Castillo.

Last weekend, the Minister of Culture, Alejandro Salas, spoke about some changes that could take place in the different ministerial offices, after this first year of President Pedro Castillo’s administration.

“It is an exclusive power of the President of the Republic, the ministerial changes correspond to him (Castillo) when he considers it pertinent; These changes are revealed that have not been discussed in the cabinet, Mr. Aníbal Torres has been working calmly, with solidity, he has been exposing government policies with enough authority and no type of change has been discussed, ”said Salas.

Pedro Castillo will make changes in the ministerial cabinet “in the next few days”, revealed a congressman from Peru Libre Aníbal Torres describes Jaime Chincha as a “vulgar journalist who falsifies the truth”, Comptroller finds irregularities in the preparation and management of the minutes of the Councils of Ministers