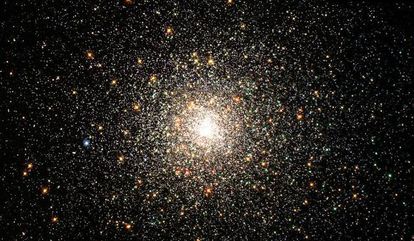 The planet Air is a blue gas giant, similar to Uranus and Neptune in size and appearance; but its atmosphere, mostly made up of nitrogen and other inert gases and rich in oxygen and water vapour, is more similar to Earth’s: hence the planet’s name.

Another characteristic that unites Air with the Earth, more than with the outer planets, is its proximity to its parent star, very similar to the Sun, which makes it a warm world ideal for life based on water, carbon and oxygen. .

Countless flying creatures that never land, as there is nowhere to land, soar through the upper levels of the atmosphere, feeding on one another or on the varied floating flora.

Due to the enormous pressures and the very low temperatures of the lower zones, where light does not reach, the planet’s core is made of liquid air. And on that frigid nuclear ocean, when the pressure of the deep atmosphere forces the carbon in suspension to crystallize, a copious rain of diamonds falls.

Air has a choleric and rocky brother: Wind. A single, incessant gale sweeps across the entire planet, like an angry snake coiled around a sphere.

But can a gale sweep across an entire planet? Strictly speaking, no, since the Fixed Point Theorem shows, among other things, that we cannot comb a furry sphere without forming at least one eddy; or what is the same, that in a spherical hurricane there must be at least one eye. And, in fact, in Wind there are two, one at each pole, since its global gale is directly related to the rotation of the planet.

It is in these oases of calm that most of Wind’s life and all of his sentient life resides. But the inhabitants of one pole know nothing of those of the other, since they are confined to their small circular world by the vertiginous wall of wind that rotates around them at more than three hundred kilometers per hour.

Occasionally, the offerings that the northern Ventians throw at the gale gods to placate them and prevent them from closing their raging encirclement are carried across the planet and into the southern oasis, and vice versa. But some and others interpret these occasional appearances as gifts from some benevolent god who instructs them on new production techniques or artistic forms. In this way, and even ignoring each other, both cultures exchange ideas, mutually enrich each other and share the same technology.

Presumably, when accidental exchanges of their respective handwritten prayers thrown into the gale, the most lucid Ventians of both poles will end up discovering the truth (why should the gods send them messages written in an unintelligible language?), and after overcoming the opposition of the priests, in time they will find a way to cross the stormy ocean of wind that has always separated them.

Although, if the accounts of the Wandering Tavern were to be believed, on the border planet Münchhausen, at least one North Ventian would have already made it to the South Pole. It would be about a suicide who, repudiated by his family, sought death in the arms of the gale and miraculously survived until he arrived, dragged by the dizzying air current, at the southern oasis, where he was welcomed as an envoy of the gods.

The texts in this series are brief narrative approaches to that “great game” of science, technique and technology -three inseparable threads of the same braid- that is transforming the world faster and faster and in which we all must participate as players, if we do not want to be mere toys.