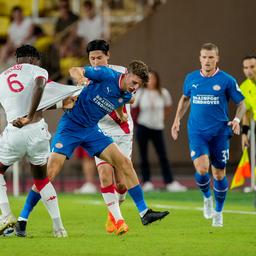 PSV started the hunt for a Champions League ticket with a draw on Tuesday evening. The Eindhoven team gave away a lead in the final phase on a visit to AS Monaco: 1-1.

Joey Veerman opened the score for PSV in the final phase of the first half after the midfielder was the end station of a nice attack. It took until the eightieth minute for the home team to equalize via Axel Disasi.

PSV, which on Saturday was still 3-5 too strong for Ajax in the battle for the Johan Cruijff Scale, made a good impression, especially in the first half. After the break, Monaco set the tone and forced a deserved equalizer in the final phase.

In the 88th minute, Monaco also hit the post and PSV escaped defeat. Myron Boadu was missing from the home team. The former AZ striker is recovering from a foot injury.

PSV hopes to reach the play-offs for a place in a group stage of the Champions League at the expense of Monaco. If it also survives the return in Eindhoven next Tuesday, a diptych with Rangers FC or Union Sint-Gillis awaits. In the Eredivisie, the PSV competition starts on Saturday with a home match against FC Emmen.