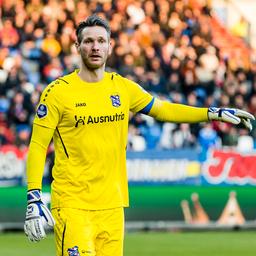 Erwin Mulder plays for Go Ahead Eagles this season. The 33-year-old goalkeeper, who was transfer-free after his period at sc Heerenveen, signed for a year on Tuesday.

After Feyenoord, Excelsior, Swansea City and Heerenveen, Go Ahead is Mulder’s fifth professional club. The goalkeeper played for Heerenveen in the past two seasons, where he left on a free transfer this summer. Goalkeeper Andries Noppert recently went the opposite way.

Mulder is happy that he will remain active in the Netherlands. “As a family, we have never made it a secret that we would like to continue living in the Netherlands,” he says on the website site from his new employer. “When Go Ahead Eagles came, the choice was made quickly for me. It is a club that immediately attracted me.”

“As a goalkeeper of Feyenoord and Heerenveen, I have played in De Adelaarshorst a number of times. Matches in which it was clearly noticeable that Go Ahead Eagles is a people’s club with fantastic supporters, who are also briefly on the field.”

Technical manager Paul Bosvelt is also happy with the collaboration. “In addition to Jeffrey de Lange and Sven Jansen, we were looking for a keeper who knows what it means to keep at the highest level and who can therefore bring competition and quality. With the arrival of Erwin, we have now been able to fill all keeper positions within the first selection.”

Go Ahead has previously strengthened itself with Bobby Adekanye, Jahnoah Markelo, Finn Stokkers and Enric Llansana, among others. Mulder can make his debut for Go Ahead on Sunday. Then the club plays an away match against AZ.