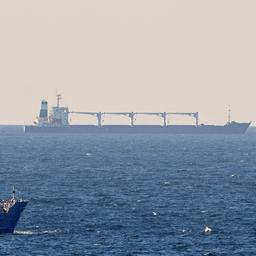 NU.nl regularly gives you an overview of the situation in Ukraine. This time: the Ukrainian grain ship that left the port of Odesa on Monday arrived safely off the coast of Turkey on Tuesday. In addition, the Russian Supreme Court has labeled the infamous Azov Battalion a terrorist organization, and Ukraine is seeking clarification about a bloody attack on a prison in Olenivka.

The safe arrival of the grain vessel Razoni is good news for the whole world. It was the first grain ship to sail since the start of the war in Ukraine. Last month, Ukraine and Russia signed a deal that guaranteed safe grain transport from Ukraine across the Black Sea. Before that, grain exports had come to a standstill, resulting in a global food crisis. Ukraine is one of the world’s largest grain producers.

On Wednesday, the Razoni will be checked by a team from the coordination center in Istanbul. The center was set up as a result of the agreement that Ukraine and Russia signed with the UN and Turkey. These four parties work together in the coordination centre. During the check, it is checked whether there is any contraband on board the ship.

After the check, the Razoni continues on its way to Lebanon. Ukraine says at least 16 grain ships are ready to depart from Ukrainian ports. The country has a total of about 20 million tons of grain stored, plus this year’s harvest. Turkey says that one ship per day can depart for the foreseeable future.

Tuesday was also dominated by a ruling by the Russian Supreme Court. That decided to label the infamous Azov battalion as a terrorist organization. The Azov Battalion is an ultra-nationalist Ukrainian organization best known internationally for its brutal resistance in the heavily harassed port city of Mariupol.

Due to the decision of the Supreme Court, prisoners of war of the Azov Battalion are no longer eligible under international rules of the law of war. Since the battle in Mariupol, Russia has taken hundreds of prisoners of war from the Azov battalion.

Meanwhile, Ukraine wants clarification about a bloody explosion at a prison in Olenivka, a town in eastern Ukraine controlled by pro-Russian rebels. Dozens of prisoners of war, mainly from Mariupol, were killed in the attack.

Since Friday, the day of the explosion, Ukraine and the separatists have accused each other of attacking the prison. Moscow claims that HIMARS missiles were hit. Those are missiles that Kyiv gets from the US. Ukraine denies the allegations.

Ukraine is also investigating itself, saying the explosion took place inside a barracks. For example, it has become clear from available footage that only one building is damaged. Images also show that the windows were blown out, something that would never be possible with a shelling of the complex.

Kyiv has asked the UN and the International Branch of the Red Cross to assist in the investigation.

Civilians killed in attack in Kherson

Ukraine accuses the Russian army of attacking a bus in Kherson. Three civilians were said to have been killed. Five people were injured.

In the southern port city of Kherson, the Ukrainians are engaged in a successful counter-offensive. Yesterday, the army reported that 40 villages in the Kherson region had been taken.