Luz del Carmen Godinez assumes today the presidency of the Jalisco State Human Rights Commission (CEDHJ), in the midst of the rejection of more than 70 civil organizations, activists and academics, who in recent days asked the local Congress to replace the election.

After complying yesterday with the delivery-reception protocol process, the new president stressed that she will strengthen the work carried out in the past administration. “I know that it is a train that is walking, we cannot stop it, so put me on your train, we are going to continue working.”

Alejandra Nuño, director of the ITESO University Center for Dignity and Justice, considered that Due to the untidiness that occurred in the appointment, the first pending issue for the new head of the CEDHJ is to guarantee a legitimacy that is vitiated from the beginning.

“The truth is that the credibility, legitimacy, autonomy and independence of the Commission are at rock bottom, there is no one today who believes in that new president.”

Among the most substantive challenges, he added, is that the CEDHJ carry out its work in the most serious and technical manner possible. “And that it can address all human rights. We see the crises that Jalisco is experiencing: every day we have news about the first places in disappearances, graves… the insecurity is tremendous, the issue of water is a great challenge.

In the statement made by the organizations and activists, a continuous setback in the defense of human rights was denounced.

New president of the State Human Rights Commission of Jalisco (CEDHJ). She has a degree in Family Sciences. Between 2003 and 2015 she held various positions in the DIF Jalisco and DIF Guadalajara Systems. Between June 2016 and until October 2021, she worked as Executive Secretary of the Municipal System for the Comprehensive Protection of Children and Adolescents of the Municipality of Guadalajara (SIPINNA). From November 1, 2021 and until her new appointment, she served as head of Department at the Guadalajara City Council. According to her resume, her field of experience is “public policy with a human rights perspective for children and adolescents.”

Luz del Carmen Godínez has held various positions in the DIF Jalisco and DIF Guadalajara Systems, in addition to the SIPINNA of Guadalajara. THE INFORMER/Archive

They see the work and voice of the president as essential

Alexandra Nuno, Director of the University Center for Dignity and Justice at ITESO.

In the human rights crisis that Jalisco is experiencing, the voice of the president is fundamental, emphasizes Alejandra Nuño, director of the University Center for Dignity and Justice at ITESO.

“For example, in receiving all the complaints and ex officio initiating the complaints that have to do with these human rights violations, processing them in a timely manner and making recommendations to the different institutions and, once again, using their moral force so that they adequately comply”.

The academic comments that there are some cases in which it was considered that The organization was doing an interesting job because it issued recommendations, such as the one regarding disappearances. “When one begins to do a technical analysis of these mega-recommendations, we realize that the Commission accumulated a significant number of files related to disappearances.”

The Entity, first place in disappearances

Last week, the CEDHJ issued the Report on Disappeared and Unlocated Persons, in which it reports that according to data from the National Registry of Disappeared and Unlocated Persons (RNPDNO), from March 15, 1964 to December 31, 2021, Jalisco was ranked as the Entity with the highest number of missing and unaccounted for persons at the national level, with 15,772.
The Central Region has the highest number of records of missing persons. The Altos Norte Region is in second place with the highest number of missing persons, “particularly in Lagos de Moreno, the highest number of cases is concentrated: this municipality borders Aguascalientes and Guanajuato, which makes it a connection route to other Entities of the country that facilitate legal or illegal activities due to their geographical location. It is added that when studying the phenomenon by rates, that is, in a proportional calculation between the number of cases and the number of inhabitants per municipality, “They lead Santa María del Oro, San Martín de Bolaños, Tuxcacuesco, Encarnación de Díaz, and San Gabriel.”

During the first half of this year, the number of complaints filed with the State Human Rights Commission of Jalisco (CEDHJ) increased. Between last January and May, a total of 3,724 were registered (including 4,126 injured people), compared to the 3,304 that were presented in the same period last year, which represents an increase of 12.7 percent.

The foregoing, according to an analysis carried out by the Institute of Statistical and Geographical Information of Jalisco (IIEG). “A complaint can be raised when the fundamental rights of a person have been violated.”

The report points out that February was the month with the highest number of complaints registered during this year, with 1,268, while in May there was the least amount with 391.

According to CEDHJ statistics, The authority most singled out for alleged human rights violations during the first half of 2022 was the Intermunicipal System of Drinking Water and Sewerage Services. (SIAPA) with 1,288 indications.

The second authority against which most complaints were filed was the Secretary of State Education, with 521. In third place is the State Attorney’s Office with 460 signs. 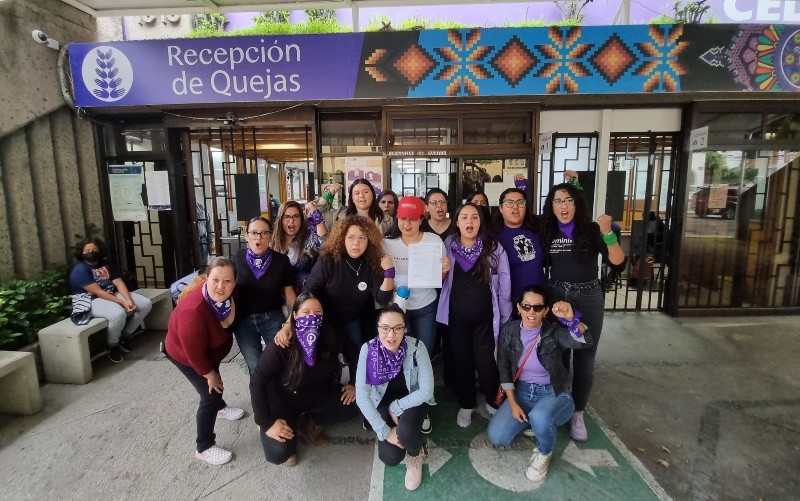 The Paritaristas went to the CEDHJ to ask for justice for omissions in the Luz case. THE INFORMER/G. Rooster

Luz Raquel Padilla Gutiérrez, a mother who cares for a child with autism and who last May had reported threats from one of her neighbors, died on July 19 after the attack she suffered three days earlier, when they sprayed alcohol on her and set her on fire. fire in the Arcos de Zapopan neighborhood.

For this case, the group Las Paritaristas yesterday filed a complaint with the Jalisco State Human Rights Commission (CEDHJ).

Of the four thousand 126 aggrieved people who filed a complaint with this body during the first half of this year, two thousand 248 are women, which is equivalent to 54.5% of the total of indications presented in the first semester, according to an analysis carried out by the Institute of Statistical and Geographical Information (IIEG).

On July 21, the National Human Rights Commission (CNDH) and the CEDHJ issued an exhortation addressed to local authorities to carry out an exhaustive investigation, with a gender and human rights perspective, into the alleged femicide of Luz.

“Both Commissions call on the authorities responsible for the prosecution of justice in the State of Jalisco to act diligently in the investigation of this unfortunate case until the facts are clarified.”

Given other cases of women denounced at the local level, on July 22, the CEDHJ issued a statement so that Jalisco legislates and implements public policies aimed at eradicating violence against women.

In this it is pointed out that the vicarious violence It is a form of sexist violence in which the children of women victims of gender violence, subject to their guardianship, guardianship and custody, are direct victims of this type of violence as they are used by the aggressor to continue harming the mother.

“Among some of its manifestations are: the threats to take them away, kill them, cause them harm for being what ‘hurts them the most’, use the spaces of coexistence with daughters and sons to hold them, or to take advantage of insulting the mother and speaking badly to them. her”.

In addition to the State Congress, a call is made to the State Judiciary to develop a protocol or guidelines that serve as a practical guide for action in cases in which gender-based violence is alleged or noticed.

Due to the omissions in the case of Luz Raquel Padilla, who was burned on July 16 in the Arcos de Zapopan neighborhood and died three days later, Las Paritaristas filed a complaint with the Jalisco State Human Rights Commission (CEDHJ).

In addition, the buildings of the Zapopan City Council, the Police Station of the same municipality and the Government Palace were closed.

But they also demanded a public apology from the municipal president, Juan José Frangie, and a statement from the rest of the authorities involved.

Nancy Castañeda, spokeswoman for Las Paritaristas, pointed out that a special plan should be made for each victim, because a generic plan cannot be put in place for all of them. “We demand a public apology of the same size as the statements he gave. It should be an apology with the same reach and same means of communication. And making your own public servants who shared the re-victimization also share the public apology”, he expressed.

Last week, Frangie took the opportunity to talk about the case, and assured that this fact touched the most sensitive fibers and revealed the challenges that exist in terms of gender violence.

“I want to be very honest. This situation has shaken me a lot and led me to understand what I need to learn to treat all cases of violence against women with empathy and respect. I offer an apology if I expressed myself wrongly”, recognized the municipal president of Zapopan.

On the other hand, The Paritaristas demanded that it be investigated who were the omitted public servants. “We ask for a statement from all the authorities, that they really get to work. From Las Paritaristas we offer training. We hope that the Commission pronounces itself with precautionary measures and we will introduce the necessary legal resources”, said Castañeda.

Appoint a new head of the gender unit

The Government of Zapopan reported that the Unit for Attention to Victims of Intrafamily and Gender Violence (UAVI), an operational group for immediate response and specialized in the protection of victims, changes its head with the arrival of Arcelia Abelar Serna, due to the resignation of Commander Carlos Alberto Antonio Franco.
The new head of the UAVI arrives with the task of fulfilling and promoting the projects that are pending, as well as reinforcing the Unit, a particular commission from the municipal president, Juan José Frangie. “With Abelar Serna, the Government of Zapopan renews and improves the operation of the UAVI, as well as the scope and commitments for the protection of the vulnerable population, and particularly women,” he stressed. At 49 years old and with almost 25 years of service at the Zapopan Police Station, Abelar Serna has a law degree from the Univer University and is currently pursuing a master’s degree in Constitutional Law and Amparos. According to the City Council, in recent years she has served as general supervisor, “work in which her functions stand out as she is in charge of reviewing the security services, that the units operate optimally and carry out with efficiency the indications of the mayor and the commissioner”.

What do you think of the work of the CEDHJ?

Participate on Twitter in the debate of the day @informador