Images like these show the serious drought that has been suffered for several months in northern Mexico, especially in the state of Nuevo León and its capital Monterrey, the second most populous city and industrial capital of the country.

“We are victims of our own success,” acknowledged the governor of Nuevo León a few days ago, Samuel Garcia. “It was and is undoubtedly the worst crisis the state has experienced,” he said, for which he blamed his predecessor in office for “not having invested” enough to guarantee the water supply.

The lack of rain, the existence of practically empty dams and the increasing weariness of the population led the Mexican president, Andres Manuel Lopez Obradorto sign a decree last Friday in which the water crisis was declared “a matter of national security”.

According to the president, with his measures he aspires to guarantee the supply in Nuevo León for the next “eight or ten years.” The authorities were criticized for not having provided a plan to deal with a drought already predicted by experts in a region accustomed to this phenomenon.

But what caused this extreme situation and what factors could have been taken into account to minimize its impact on the population?

The drought suffered by the north of Mexico is mainly due to La Niña, the climatological phenomenon due to decreases in the temperature of the sea surface in the equatorial Pacific but which, at a global level, modifies winds and precipitation.

“La Niña causes it to stop raining in northern Mexico from December to May-June and influences a change in patterns that causes warmer temperatures and causes this drought that we continue to see,” he says. Christian Domínguez Sarmiento, researcher at the UNAM Center for Atmospheric Sciences.

Both La Niña and its warm counterpart El Niño can alter global temperatures and cause very extreme atmospheric effects. Both are frequent events, but usually do not last more than a year.

“The amazing thing is that this Girl has lasted since 2020, It’s too much and it’s something that hasn’t happened for 20 years,” The meteorologist Domínguez Sarmiento explains to BBC Mundo.

According to the expert, there are a multitude of oceanic factors that are prolonging this Niña, causing droughts that, as a natural phenomenon that has existed since time immemorial, “we will not be able to avoid.” However, be warned, its crudeness will be increased more and more by climate change conditions.

“The scenarios say that ten or 20 years from now we could have more intense and extreme droughts, mainly in the north of the country. And they will be more recurrent. In other words, this Niña, which has already lasted three years, could appear again in less time,” he warns.

Half of the water supplied to the Monterrey metropolitan area comes from underground wells, while the other half comes from three dams with a total capacity of 1,462.5 Mm³.

But, given the lack of rain and with the exception of El Cuchillo (devoted mainly to agricultural use), its poor fill levels now look alarming.

The recurring droughts and the increase in the population in the region -which almost doubled since 1990 to 5.3 million people in 2020- shows that “it should have been invested in projects and more infrastructure” in water, he tells BBC Mundo Ramon Aguirre Diaz, former director of the Mexico City Water System.

The civil engineer expert in water and sanitation recalls the Monterrey VI project, an aqueduct that intended to bring water to Monterrey from the Pánuco River in Veracruz and that was canceled in 2016 amid questions about possible ecological and social damage caused by the work.

“The problem is that, when it was cancelled, it was said that there were up to 15 alternatives under study… and it was not until 2020 that they began to build the Libertad dam, with much less capacity than Monterrey VI,” criticizes.

In the presidential decree signed this Friday, financing was included for the construction of the El Cuchillo II aqueduct and the completion in 2023 of the Libertad dam, something that environmental activists considered a good “medium-term” solution.

According to official figures, most of the use of water in Nuevo León is destined for the sum of agricultural and industrial use. A large part of these large companies in Monterrey operate through the exploitation of wells, thanks to concession agreements reached with the National Water Commission (Conagua) for a specific period of years.

For this reason, many demanded that limitations be imposed on these sectors in the use of water. President López Obrador himself came to ask the region’s soft drinks and breweries to reduce or even stop their production to allocate all the water they use in their factories to the population’s consumption.

In recent weeks, several companies have announced that they would cede part of their water concessions. Until last Friday, Conagua had signed agreements for industries to contribute 500 liters per second to the drinking water network, while citrus farming areas will contribute up to 1,000.

However, and because these figures are still not sufficient, the decree signed by López Obrador gives the green light to impose an increase in these transfers by contemplating that the authorities can provisionally reduce the volume of water of the concession companies for at least six monthswhich will be released from their payment for the duration of the initiative. 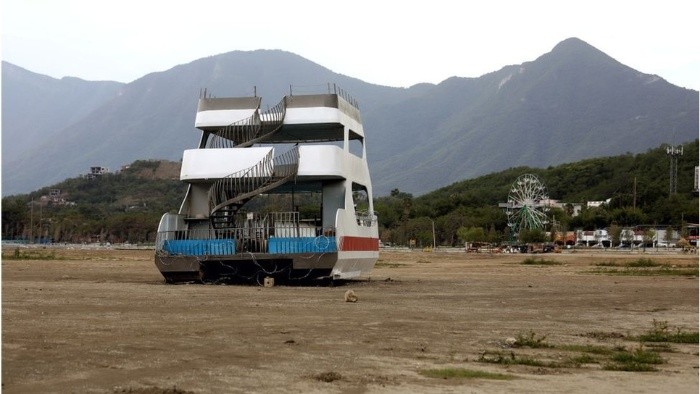 The drought in the La Boca dam has left images like that of ships stranded in what used to be a large water reservoir. GETTY

“This measure comes late because this crisis forecast has been known for at least 18 months and it is also insufficient: the consumption of industry and agriculture is very large and these transfer volumes should be increased,” he questions. Antonio Hernandeza biologist expert in environmental policy issues from Monterrey.

In an interview with BBC Mundo, Hernández gives as an example that the steel company Ternium, the company with the largest water concession in the state, has a volume of liquid that represents “98% of what the population of Monterrey would require.”

“Technological progress is totally legitimate. What it is not was to have privileged and put all the eggs in the basket of industrialization, failing to see the importance of nature and its natural resources. Monterrey is an example of this,” he says. to BBC World Luis Gerardo Esparzaagronomist specialist in rural development. 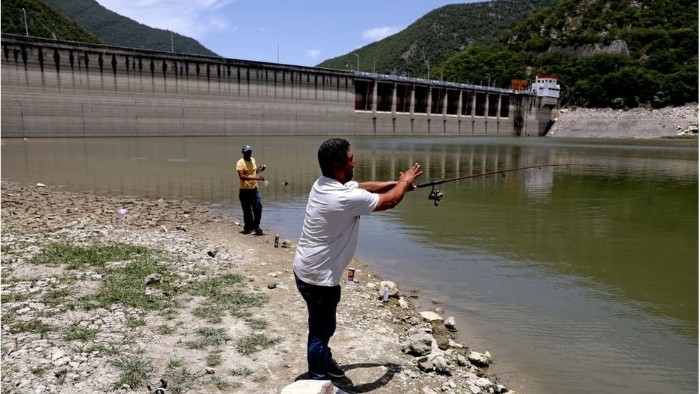 But a large part of the productive life of Monterrey is linked to these industrial activities, which at the same time are one of the great consumers of water. “If (those companies) didn’t work, you would generate another problem of a more socioeconomic nature. Therefore, the fair thing to do would be to regulate and update the volumes that the industry really needs,” Hernández replies.

Deforestation is also one of the factors to take into account to understand the recurring droughts in the area.

“Forest fires are the main reason why watersheds are degraded in natural areas from which the water that supplies Monterrey is extracted,” recalls Hernández, who calculates in some 21,000 hectares the extension burned in the last two years.

According to the environmental activist, the governments cannot increase the extraction of water until they begin a process of ecological restoration of those basins that are “Monterrey’s water factory, that is fundamental.”

“The fires destroy the forest bark and increase the silt (mud or garbage) that goes to the riverbeds, which in this area goes mainly to the Santa Catarina River. You have to make a huge investment to extract those millions of cubic meters of gravel and gravel,” adds Esparza, co-author of a study on the water crises in Monterrey since 1597. 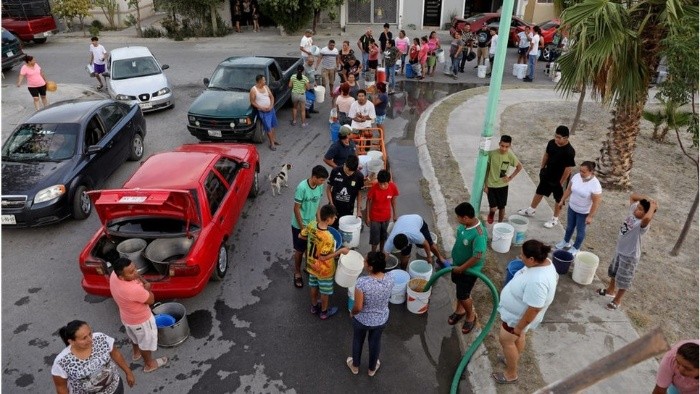 Another factor to improve pointed out by experts is the need to improve environmental education among the population and promote a more responsible use of water in a region where various clandestine intakes were located that diverted water to ranches and private land.

Aguirre Díaz believes that the real solution would go through a review and increase in rates for people whose meters reflect a bad habit of consuming water. “This is solved by making it difficult for people to waste”, points.

But Hernández believes that it would be more effective to lower the rates for those who use infrastructures that reduce consumption.

“If the government establishes rate incentives for those who install saving toilets or showers, for example, it would be something more favorable and successful among the population,” he says. 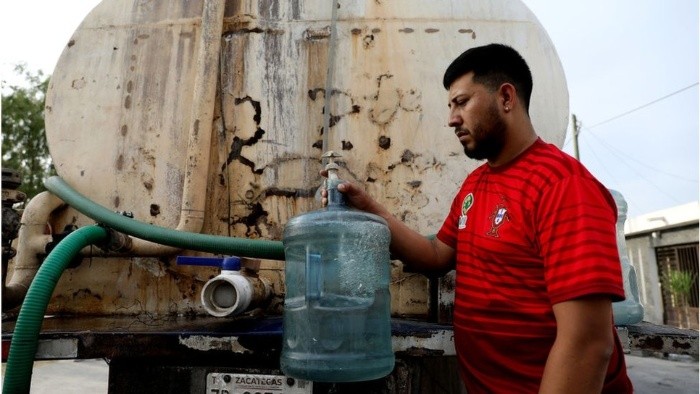 When will the drought end?

In this scenario, the biggest unknown is how long will this situation of severe drought last?

The meteorologist Domínguez Sarmiento assures that current forecasts point to La Niña will last at least until the end of the year.

“In November, the models will have to be analyzed again to see what they tell us about 2023, but it would be expected to end in December and it will already transition to a neutral phase,” he predicts. 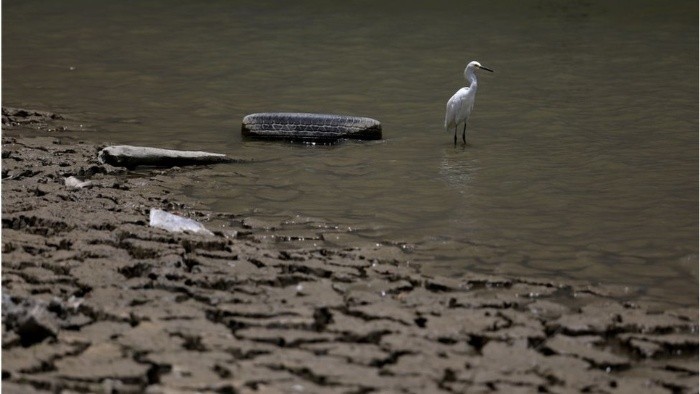 However, that does not mean that the severity of the drought will continue until then. Once Mexico enters the rainy season between July and August, rainfall is expected to gradually increase and the extent of the current drought will decrease.

The expert highlights that “northern states such as Chihuahua, Coahuila, Sonora and Nuevo León depend on the existence of a tropical cyclone that makes landfall and leaves a high amount of rain.”

“That is what is expected and it is usual for it to happen in the month of September. That’s when the drought could end,” concludes.