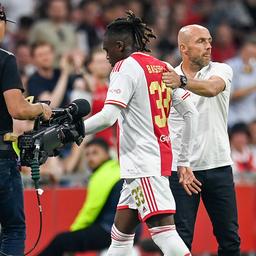 Calvin Bassey misses the first two games of the competition due to a suspension for his red card in the Johan Cruijff Scale game. The KNVB suspended the Ajax player on Monday for three matches, one of which was conditionally.

During his Ajax debut in the lost match against PSV (3-5) Bassey made a hard foul on PSV player Ismael Saibari. The Nigerian international was sent off by referee Dennis Higler after intervention by the VAR.

Bassey will miss the opening game of the Eredivisie season at Fortuna Sittard on Saturday. A week later, the defender is missing during the home match against FC Groningen.

The 22-year-old Bassey may make his Eredivisie debut on August 21 in the away match against Sparta Rotterdam.

Bassey was acquired from Rangers FC for 23 million euros last month. He is the successor of Lisandro Martínez, who was sold by Ajax to Manchester United.