War in Ukraine: the death sentence that embarrasses Morocco 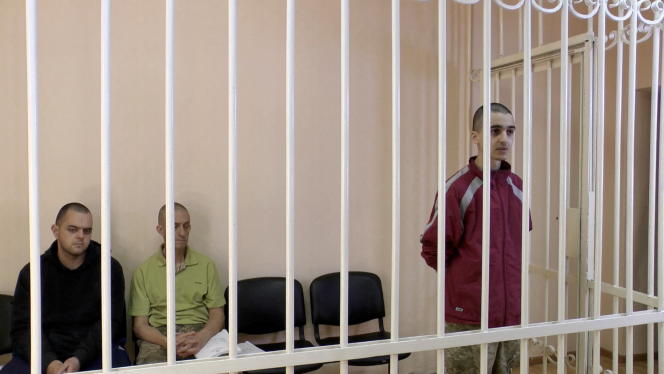 Britons Aiden Aslin, Shaun Pinner and Moroccan Brahim Saadoun, captured by Russian forces during the war in Ukraine and sentenced to death, here in a court in the self-declared republic of Donetsk, which provided this image on June 8, 2022. SUPREME COURT OF DONETSK PEOPLE/VIA REUTERS

Bashar Al-Assad’s Syria and Kim Jong-un’s North Korea are the only two countries to have established diplomatic relations with the pro-Russian separatist “republics” of Donetsk and Luhansk, in the Ukrainian Donbass. We remember that the recognition by the Kremlin of the “independence” of these two “republics”, on February 21, preceded the Russian invasion of Ukraine by three days. Since then, the main so-called show of “sovereignty” by Ukrainian supporters of Russia has been the June 9 death sentence by the Donetsk court of three foreign “mercenaries”. Britons Aiden Aslin and Shaun Pinner had surrendered to Russian forces two months earlier, along with other fighters holed up in the Azovstal factory, the resistance stronghold in Mariupol, until that city fell last May .

Read also: Article reserved for our subscribers In Azovstal, the surrender of the “heroes”

A lover of Ukraine

The third sentenced to death is a 21-year-old Moroccan, Brahim Saadoun, who came to kyiv in 2019 to study aerospace engineering at the Polytechnic Institute. Around 8,000 Moroccan students lived in Ukraine at the start of the Russian invasion, where they constituted, after India, the second largest community of foreign students. These Moroccan nationals then chose, in their overwhelming majority, to leave the country, in more or less chaotic conditions.

This was not the case with Brahim Saadoun who, according to his Ukrainian friends, was “fell in love with Ukraine” and wanted to “return the favor to this country who gave him so much. These same friends claim that Brahim Saadoun had joined the Ukrainian army in the fall of 2021. It was moreover in the uniform of the 36th marine infantry brigade of Mariupol that he was captured last April in the Donbass, and not a month earlier as claimed in the Russian media at the time. of his trial.

The Russian Ministry of Defense had prepared public opinion for the Donetsk verdict by insisting, shortly before the judgment, that “the mercenaries who arrived in Ukraine are not combatants within the meaning of international law”. The speaker of the Duma, the lower house of the Russian parliament, later backed the verdict handed down by the separatist authorities, adding that “ the death penalty is what these fascists (sic) deserve “. This triple death sentence was, on the other hand, qualified as a “war crime” by the Office of the United Nations High Commissioner for Human Rights, while the European Court of Human Rights ordered Moscow to stay to the execution of Brahim Saadoun. In the United Kingdom, the death sentence pronounced against Aiden Aslin and Shaun Pinner arouses all the more emotion as a third British prisoner, Paul Urey, died on July 10 at the hands of the separatists. from Donetsk. London consistently considers that its two nationals are “prisoners of war”, settled in Ukraine since 2018 and officially engaged in the Ukrainian army.

You have 44.62% of this article left to read. The following is for subscribers only.