Euro 2022: the English dominate the Germans in overtime and win the first major title in their history 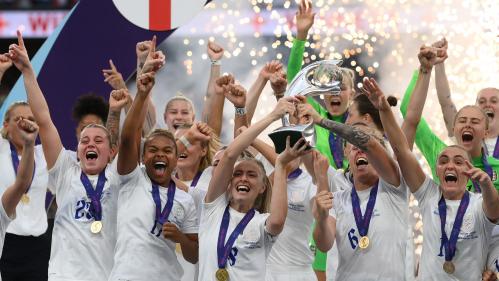 They ignited Wembley. The Lionesses won in overtime in the final of the Euro against Germany (2-1), Sunday, July 31, to win the first major title in their history. In a close match, in front of 87,123 cheering spectators, the English were delivered by Chloe Kelly ten minutes from the end of extra time. Another substitute, Ella Toone, had opened the scoring on the hour mark, before Germany came back to score late in the game. Thanks to this victory, the English finally put their name on the Euro charts after two finals lost in 1984 and 2009, and concluded their home tournament in the best possible way.

England fans were preparing for a dreaded penalty shoot-out when Chloe Kelly changed the fate of this final. While the match had lost intensity since the start of extra time, and both teams were beginning to make mistakes and approximations, the Manchester City player, who returned to action after Beth Mead’s injury, s found herself well placed in the area to push a good cross from Lucy Bronze into the back of the net (110′). Released, the Lionesses only had to manage the last minutes against physically and morally exhausted Germans, to win the title and immense happiness.

Before the extension, the solution had already come from the bench for the English. After a first period of high flight, where they had made the game (four corners in the first 20 minutes), the English had died out on returning from the locker room. The opportunity for the coach of the Lionesses, Sarina Wiegman, to bring in her duo of “supersubs” from Manchester United, Alessia Russo and Ella Toone. A few minutes later, well served at the limit of offside by Keira Walsh, Toone had placed a clever lob to deceive Merle Frohms.

But the Germans had not given up, despite the terrible absence of their star scorer Alexandra Popp, injured in the warm-up. After a first period to get into the rhythm, Léa Schüller and Lina Magull took over from the Woflsburg player. The succession of attacks had finally paid off ten minutes from the final whistle, when Lina Magull, the most dangerous German player in the second half, had sprung up at the near post to equalize on a cross from Tabea Wassmuth.

Enough to revive hope on the Nationalelf side and push the English into extra time, before giving in at the very end of the game. Crowned eight times in the history of the competition, Germany lost their first European final on the lawn of Wembley.

Under the baton of Sarina Wiegman, who had already led the Netherlands to the title five years ago, the Lionesses are writing the most beautiful page in their history, at the end of a Euro which they have largely dominated. Best attack with 22 achievements, best defense (tied with their evening opponent), the English also have in their ranks the best scorer and the best passer of the tournament (Beth Mead, six goals and five assists). All in front of a record crowd for a Euro, men and women alike.

A coronation which confirms England as the new stronghold of European football, after its. Thirteen years after their last final lost in 2009, already against Germany, the Lionesses finally get their revenge, and their golden adventure.