Migrants: INM deports 126 Venezuelans; they go 342 in the year

The National Migration Institute (INM) carried out the return of 126 foreigners from Venezuelaso far this year they add a total of 343 deportations.

It should be noted that Venezuela is experiencing a massive exodus of its population from the governments of Hugo Chávez and Nicolás Maduro. It is estimated that three million people from that country have emigrated mainly to Colombia, Brazil, Ecuador, Peru and the United States. 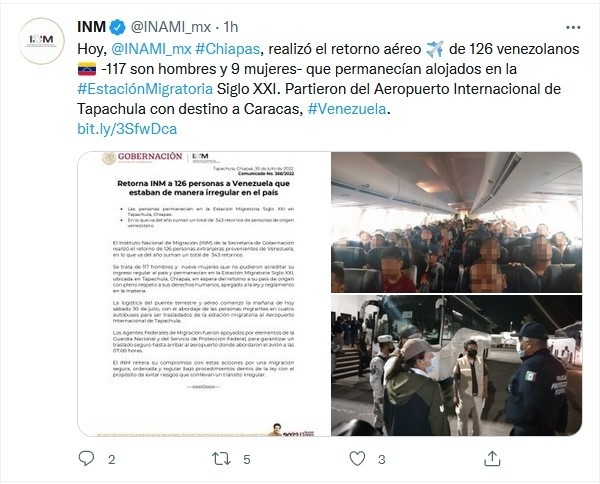 The INM reported in a bulletin that These are 117 men and nine women who could not prove their regular entry into the country and They remained at the Siglo XXI Immigration Station, located in Tapachula, Chiapas, awaiting their return to their country of origin with full respect for their human rights, in accordance with the law and regulations on the matter.

The logistics of the land and air bridge began this Saturday morningwith the boarding of migrants in four buses to be transferred from the immigration station to the Tapachula International Airport.

The Federal Migration Agents were supported by elements of the National Guard and the Federal Protection Service, to guarantee a safe transfer until they arrived at the airport where they boarded the plane at 07:00.

Fake referendum in occupied Ukraine over, what now?