Inflation: which countries already apply a tax on corporate superprofits, under debate in France? 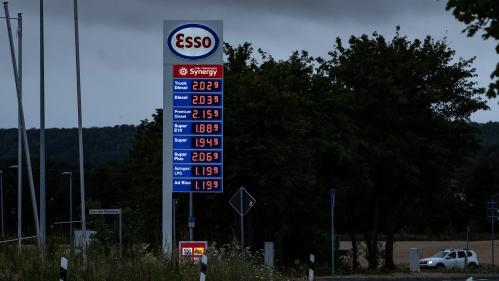 Almost $6 billion. This is the net profit earned in the second quarter of 2022 by TotalEnergies, according to the announcement made by the group on Thursday July 28. A balance sheet more than twice as high as the gains of the second quarter of the previous year, which makes people cringe and could relaunch the debate on “superprofits”, against a backdrop of war in Ukraine and an inflationary context.

First supported by the Nupes and the National Rally (RN), the idea of ​​a tax on the “superprofits” of large groups had found an echo among part of the presidential majority and within the party Les Républicains (LR ), but had been rejected by a few votes by the National Assembly, on July 23, during the examination of the amendments to the amending finance bill.

The @governmentFR refused exceptional taxation of profits linked to the rise in energy
Here are the results published by TotalEnergies
↗️ profits at 18.7 billion at the end of June, ×3 compared to 06/21
To be compared to the 500 million granted for the lowering of the price at the pump pic.twitter.com/jTDM6kZkcH

If, on the French side, the head of government Elisabeth Borne closed the door on Thursday to the taxation of superprofits, abroad some countries are thinking about it. And others have even taken the plunge. Franceinfo returns to the way in which the neighboring countries of France have seized the debate.

In the United Kingdom, a tax on the profits of the oil giants

The UK’s Liberal parliament passed legislation at the end of May. To finance a plan of 15 billion pounds (about 17.5 billion euros) for the most disadvantaged households, the country has decided to introduce a temporary tax of 25% on the profits of oil and gas giants, such as BP, after weeks of negotiation.

“When fuel prices return to historically low levels, the leverage will be phased out, with the introduction of a sunset clause in the law,” Rishi Sunak, the finance minister at the time, explained. today in the running to replace Boris Johnson as Prime Minister. To encourage energy transition, the measure in question also provides for the tax to be reduced through a “generous investment grant of 80%” if the energy giants concerned invest in low-carbon energies.

This temporary tax should make it possible to finance a third of the new social measures, bringing in around 5 billion pounds over the next twelve months. Almost one in eight of the UK’s most vulnerable households will receive at least £1,200 in 2022, including a one-off £650 cost of living payment, the UK Treasury announced at the end of May.

In Spain, a tax on banks and electricity companies

The country took the plunge in mid-July, when the head of the Spanish government, Pedro Sanchez, announced that exceptional taxes would be put in place on energy and financial companies in 2023 and 2024. This, to allow the population to cope with soaring prices.

“This government will not tolerate companies taking advantage of the crisis to enrich themselves,” assured the Socialist Prime Minister to the Spanish Chamber of Deputies. The government hopes to reap nearly 7 billion euros between 2023 and 2024 thanks to these taxes, with gains estimated at nearly 2 billion euros per year for electricity companies and 1.5 billion for banks.

The announcement was made as part of a series of social measures taken to protect purchasing power against inflation, which exceeded 10% over one year in June. Among them are aid on fuel, a reduction in VAT on electricity and an increase in retirement pensions. Pedro Sanchez noted in early July that “since prices started to rise (…) Spain has mobilized 30 billion euros” to support its businesses and consumers, “i.e. the equivalent of 2.3% of its gross domestic product.

In Italy, the large companies in the energy sector targeted

For its part, Italy announced at the end of May its intention to raise its tax on superprofits to 25%, equaling the rate in force in the United Kingdom. At the end of March, the country had decided to introduce by decree a 10% tax on the profits of large companies in the energy sector – such as Enel or Eni – made thanks to the surge in prices due to the war in Ukraine. “Let’s redistribute this money to companies and families who are in great difficulty,” said the Italian Prime Minister at the time, Mario Draghi.

The government hopes to derive 11 billion euros from this tax. But the estimate has been repeatedly challenged by companies, who say their profits may not be as high as oil and gas prices suggest. The money collected thanks to this new tax intends to finance a package of measures of 14 billion euros intended to alleviate the surge in energy prices for households and businesses. The envelope includes in particular a bonus of 200 euros for 28 million Italians with annual incomes of less than 35,000 euros.

Inflation stood at 8% in June year on year, up more than one point from the previous month, according to data provided by Istat (in English), Italian National Institute of Statistics. This is the highest level reached since January 1986.

In Germany, an ongoing reflection on taxes on refineries

Economy Minister Robert Habeck, a member of the Greens and vice-chancellor of Germany, has come out in favor of a tax on refineries. He intends to present a text in the coming weeks, in order to attack the profits of large companies.

This solution is proposed by the German government to counter the failure of the reduction in fuel taxes. On June 1, Chancellor Olaf Scholz announced an exceptional discount on fuel for three months, to reduce household bills in the face of rising energy prices. But the expected impact of this rebate on motorists has not taken place. “Since the beginning of June, the price of fuel at the pump has not stopped climbing and found itself, for diesel as for gasoline, around 2 euros per liter, that is to say at standard levels of ‘before this measure’, reminded franceinfo at the end of June. Inflation reached 7.5% over one year in July, ie 0.1% point less than the previous month.