Viral: They rescue in Brazil a woman and her two children imprisoned at home 17 years!

A woman and her two children were rescued by police in Brazil at his home in Rio de Janeiro, where they were locked up for the last 17 years by order of her husband and alleged father.

“The young people, who would be the children of the woman and the suspect of keeping them in captivity, they were tied up, dirty and malnourished”the Rio Military Police said in a statement.

The trio was released on Thursday by agents of that force who arrived at the residence, located in the Guaratiba neighborhood, in the western part of Rio, alerted by an anonymous complaint.

The woman and her children – 19 and 22 years old, according to local media – were hospitalized with a picture of “severe dehydration and malnutrition,” the Rio Health Secretariat said in a bulletin.

The mother told the authorities that sometimes they went up to three days without eating and that they were constantly victims of physical and psychological violence by her husband and alleged captor, Luiz Antonio Santos Silva, with whom she was a partner 23 years ago, according to the G1 portal. 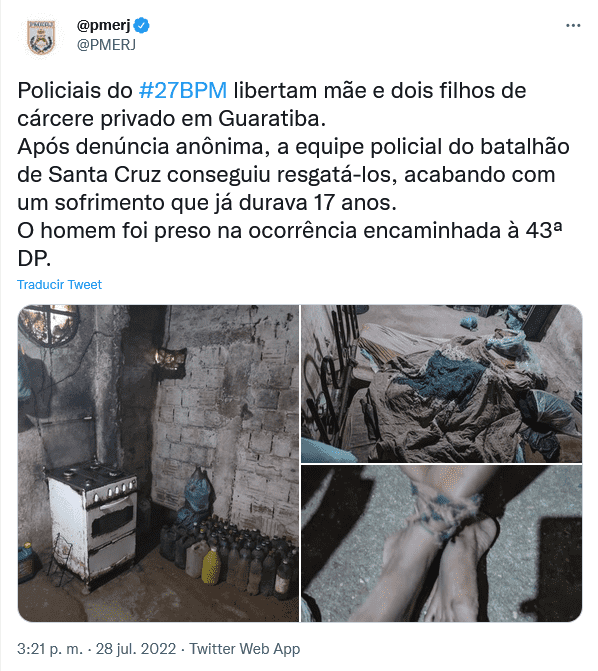 “You have to stay with me until the end, you will only leave here dead,” the victim told the police about her husband’s threats, who did not allow her to work or allow the young people to study.

Although they are of legal age, the children appear to be children, as can be seen in images published by Brazilian media.

“We saw the state in which the two children came out and I think they would not have survived another week. I spoke with her (the mother) in the ambulance (after being rescued). She could not speak or express herself because of weakness,” Marizete Dias, an inhabitant of Guaratiba, told G1.

Residents of the neighborhood told the media that Santos Silva was nicknamed “DJ”, because he used to play loud music, apparently to prevent the screams of his relatives from being heard in the street.

And they assured that the case had already been reported two years ago, but that the authorities only acted until now.

The man must answer for the crimes of kidnapping, torture, mistreatment and aggression, according to G1.