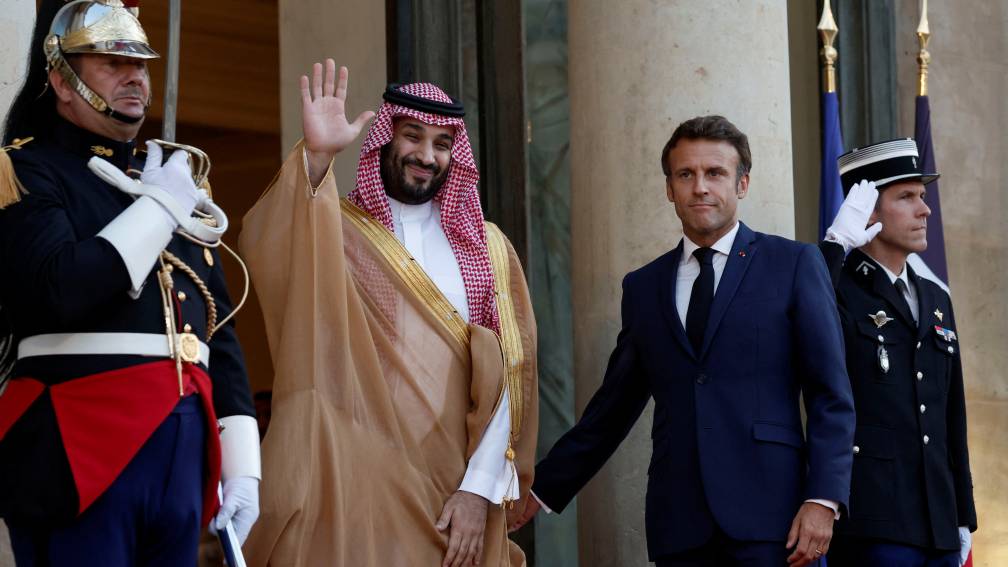 Everything becomes liquid under pressure. Over millions of years, the weight of thick layers of rock turns the remains of marine organisms such as plankton and algae into petroleum. And under the weight that petroleum puts on Western energy bills, the principled straight backs of heads of state will turn into realpolitik flexible legs within a few years, or so it sounds. at critics.

Saudi Crown Prince Mohammed bin Salman was declared persona non grata by the West in 2018. The reason was the murder in Istanbul of journalist Jamal Khashoggi, a critic of the Saudi royal family, in the embassy of Saudi Arabia. According to the CIA, Bin Salman was behind it.

However, this week ‘MBS’ – while still denying personal involvement in the assassination – was received with great ceremonial display at the Élysée by French President Macron and at the foot of the Acropolis by Greek Prime Minister Mitsotakis; his first visits to the EU since 2018. Earlier this month, US President Joe Biden met him in Jeddah.

The photo with his fist against Biden’s fist captured MBS climbing out of the diplomatic trough. Despite all the strong language (Biden previously vowed to treat MBS as a pariah), it looks like the Saudi crown prince has been diplomatically rehabilitated.

While Saudi Arabia has remained an important partner of the West in recent years, the war in Ukraine has accelerated the re-acceptance of bin Salman as a public interlocutor of Western leaders. Since the Russian invasion and subsequent sanctions, the prices of oil and gas on the world market have risen even further. And so the fuel receipt and the energy bill of consumers are also considerably higher.

As the largest oil exporter in the world, Saudi Arabia has a lot of influence on the oil price. If the supply rises, the price falls. Western countries, especially America, are therefore urging Saudi Arabia to produce more oil, and to convince the other OPEC+ countries to do the same.

Afterwards, the Élysée released a whole series of talking points between Macron and Bin Salman. In order: the war in Ukraine, energy supply, the situation in the Middle East, the nuclear deal with Iran, bilateral issues – France supplies many weapons to Gulf countries including Saudi Arabia – and at the very bottom: “the issue of human rights in Saudi Arabia.” Arabia”.

Human rights groups and Jamal Khashoggi’s fiancée spoke out strongly against bin Salman’s arrival in France. Two organizations even filed charges against the crown prince, who – because he is not an official head of state – would not be immune from prosecution. But what do “our human rights arguments stand for against rising oil prices and record inflation?” sighed the chief executive of Amnesty International.

On Twitter, Hatice Cengiz says he is outraged that “my fiancé’s executioner is being received with great fanfare”:

Not much at Macron, as it turns out. In December, he was the first Western leader to visit the crown prince in Saudi Arabia after Khashoggi’s assassination. In order to exert influence, you have to stay in conversation, is the French reasoning.

It remains to be seen whether this will yield anything in this case. Biden was told after meeting bin Salman that Saudi Arabia is of course “listening to our friends” but when push comes to shove “OPEC+ is monitoring the market situation and will provide the amount of energy it needs”.

After dinner at the Élysée, it was announced that France and Saudi Arabia had discussed “dividing energy supplies to European states” (read: becoming less dependent on Russia) and the need to “stabilize the global energy market”.

OPEC+ will meet on August 3 to decide whether to raise global oil levels further, allowing prices to fall. It will then also become apparent whether “subordination of human rights to short-term interests”, such as Amnesty International it describeshas been able to serve as a lubricating oil for Western wishes at all.

“It’s been a good week for the crown prince. All the attention and invitations earn him international recognition. It doesn’t seem to be about human rights for a while. For economic and political interests, Saudi Arabia is too important to ignore.”

However, the visit to France in particular provides Saudi Arabia with more than just status, says Mohr, who points to the still difficult negotiations between the West and Iran about a nuclear agreement: “Iran and Saudi Arabia are political enemies. Isolation from Iran is therefore convenient for Saudi Arabia. Moreover, Iran could significantly increase oil production with an agreement.”

This would in turn cause the oil price to fall and an enemy of Saudi Arabia to gain an economic advantage. It cannot take Saudi Arabia long enough before an agreement, to which France is an important party, is signed.