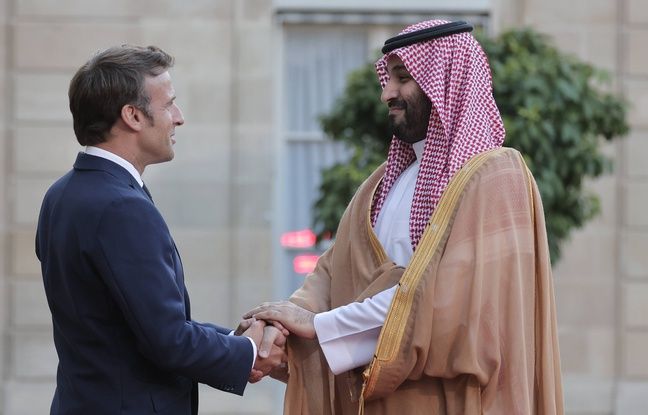 Emmanuel Macron warmly greeted his host dressed in traditional Saudi attire, and this is the first visit to Europe since the assassination of Saudi journalist Jamal Khashoggi at the Saudi consulate in Turkey less than four years ago, according to images broadcast by AFP TV.

The American intelligence services have pointed the responsibility of the crown prince, who denies having ordered the assassination even if he admitted bearing the responsibility for it as a leader. This meeting is a further sign of the “rehabilitation” of the de facto leader of the kingdom, less than two weeks after the visit of US President Joe Biden to Saudi Arabia, which consecrated the return of the crown prince, nicknamed MBS, on the international scene, in a context of war in Ukraine and soaring energy prices.

In response to the anger of human rights defenders, the French presidency said Thursday that Emmanuel Macron would address the “question of human rights as he does each time with Mohammed bin Salman”. “He will address (this question) in general but he will take the opportunity to talk about individual cases”.

The Elysée affirms that this dinner is necessary, in view of the surge in energy prices, the food crisis in the Middle East and concerns linked to the Iranian nuclear program. “If we want to confront each other, to tackle the consequences of these crises on the one hand and to weigh in the region for the benefit of all, the only way is to speak with all the main actors”, indicated the presidency.

On Thursday, a complaint for complicity in torture and enforced disappearance in connection with the assassination of Jamal Khashoggi was filed in Paris against the crown prince, announced the NGO Democracy for the Arab World Now (DAWN), founded by the Saudi journalist. , and the Swiss NGO Trial International.

Khashoggi’s fiancee “scandalized” by the reception of an “executioner”

Hatice Cengiz, Khashoggi’s fiancée, said she was “scandalized and outraged that Emmanuel Macron receives with all honors the executioner of my fiancé”, in a message in French addressed to AFP.

“The visit of MBS to France and of Joe Biden to Saudi Arabia does not change the fact that MBS is none other than a killer,” Agnès Callamard, who led an investigation into the assassination by Saudi agents of Jamal Khashoggi when she was UN special rapporteur on extrajudicial executions.

Columnist for the Washington Post, critic of Saudi power, the journalist was killed and dismembered on October 2, 2018 in the premises of the Saudi consulate in Istanbul when he came to get the papers necessary for his marriage. Hailed for its reforms, “MBS” is however criticized because of the repression carried out against dissidents in religious, political, intellectual, economic circles and even within the royal family. His image as a reformer had been tarnished globally by the assassination of Khashoggi.

If the “fist bump”, fist to fist, exchanged between the two men in Jeddah during the visit of Biden sealed the return of the American president on his campaign promise to treat the kingdom as a “pariah”, the first trip of MBS within the European Union goes badly among human rights defenders.

For Saudi activist Lina al-Hathloul, director of communications at the human rights organization ALQST, this visit “is a blow to Saudi activists”.

Lina al-Hathloul is the sister of feminist Loujain al-Hathloul, an icon for the defense of women’s rights in the Saudi kingdom, who was imprisoned for almost three years before being granted parole in February 2021. Rather than supporting the victims of systematic human rights violations in Saudi Arabia, Macron would rather rehabilitate a crown prince whose abuses have been widely condemned by the international community,” she told AFP.

Less than four years after the Khashoggi affair, Russia’s February 24 invasion of Ukraine sent energy prices into a panic. Western countries have since sought to convince Saudi Arabia, the leading exporter of crude oil, to increase its production in order to relieve the markets and limit inflation.

Several left-wing political figures in France have criticized this visit. “It is not at the Elysée Palace but in a police station that MBS must be welcomed in France”, thundered the ecologist deputy Aurélien Taché, considering that this visit threw “shame” on Emmanuel Macron.