Highway to Chapala: Trailer without brakes kills one and injures seven

One dead and seven injured left an accident on the highway to Chapala, in the lanes that go to that municipality.

According to the Highway Police, Around 12:30 pm yesterday, the driver of a double trailer lost control due to a mechanical failure in the brakes and impacted seven vehicles and a motorcycle. This happened at the El Tapatío hotel, in the La Micaelita neighborhood, in Tlaquepaque. The driver fled.

Two of the injured are in serious condition. They and the rest of the injured were referred by paramedics and elements of the Emergency Medical Care System (SAMU) to Cruz Verde Marcos Montero, Regional Hospital 46 and the Western Medical Center of the Mexican Institute of Social Security (IMSS) and to the Civil Hospital of Guadalajara.

This event caused traffic problems for four and a half hours. Until 10:00 p.m. yesterday, the cleaning of a lane continued.

Also, An older adult died after being run over by a state police patrol whose crew members went to the point of the accident to help those affected.

In 2010, the Chamber of Deputies asked the Ministry of Communications and Transportation of the federal government to modify the Official Mexican Standard so that the circulation of transport units called “double-articulated truck tract” would be prohibited.

“They are true rolling coffins that, in addition to causing deaths and injuries, affect roads and highways due to their excess weight, which damages pavements, signs, toll booths and bridges,” he stressed.

However, to date the initiatives have not prospered.

On October 25, 2010, a double trailer trailer lost its brakes and caused a carom that left approximately 50 injured on the road to Chapala.

On March 28, the collision of a public transport truck and another that transported scrap metal, also at the El Tapatío hotel, left 35 injured.

Since 2010, the Chamber of Deputies requested the Ministry of Communications and Transportation to modify the Mexican Official Standard and ban double trailer trailers, for causing two thousand accidents and 900 deaths a year. Since then several initiatives have been presented and all have been forgotten. They also require constant operations to detect faulty and irregular vehicles, as well as drivers in poor health.

The National Confederation of Mexican Carriers has spoken out against double trailers. 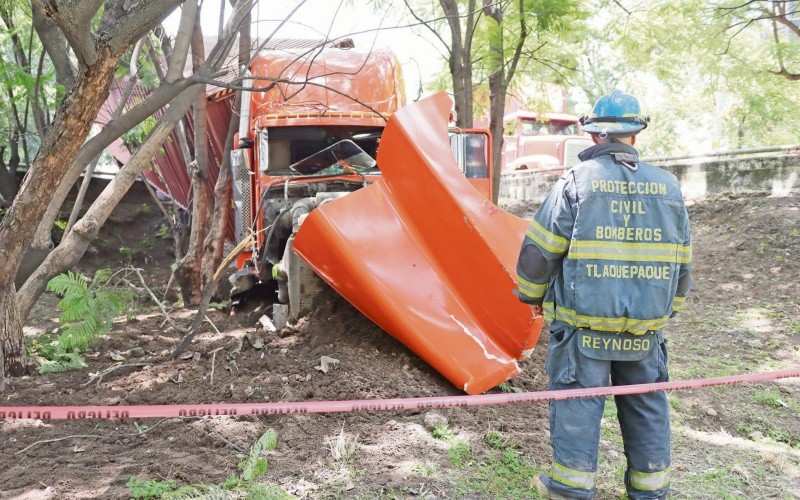 The driver of the truck with a double trailer, which caused the crash, fled. SPECIAL

The main reasons for accidents are speeding, being overweight and mechanical failures.

Highway to Chapala, one of the most dangerous in the State

The highway to Chapala has been listed as one of the most dangerous in Jalisco in the last year due to the spectacular accidents that have occurred on it. In addition to the mishap that occurred yesterday, just a month ago a crash took the lives of three people; on May 16, a 25-year-old man died after his car was pressed after hitting a personnel transport truck and, just a month earlier, on April 16, a woman died when the truck she was traveling in was embedded in a tree on the side of this road.

The 28th March a public transport truck collided with another that was transporting scrap metal, leaving at least 35 people injured; 20 days earlier, the collision between a brick truck and a trailer took his life two men and left another with serious injuries.

In the last five years, Between 2017 and 2021, there have been at least 133 fatal crashes on the highway to Chapala, that is, an average of 26 crashes with deaths on this road each year, according to road accident statistics recorded by the Ministry of Communications and Transportation (SCT); This road section is federally assigned.

The mishaps recorded in this five-year period claimed the lives of at least 29 people in the place where the mishap occurred, not knowing how many more could have died in hospitals. In addition to those mentioned, the SCT recorded at least 70 injuries that required medical attention. On the other hand, the material damages recorded in this period, according to the Secretariat’s estimates, amounted to 7.5 million pesos.

According to the SCT, the Guadalajara-Chapala highway has a traffic of 160 thousand vehicles daily on average, considering both directions of circulation, with which it is constituted as the highway section with the highest vehicular traffic of the federal highway network in Jalisco.

A double trailer trailer caused the accident on the highway to Chapala. SPECIAL

Roads with the most mishaps in 2021

Deaths due to traffic accidents in Jalisco 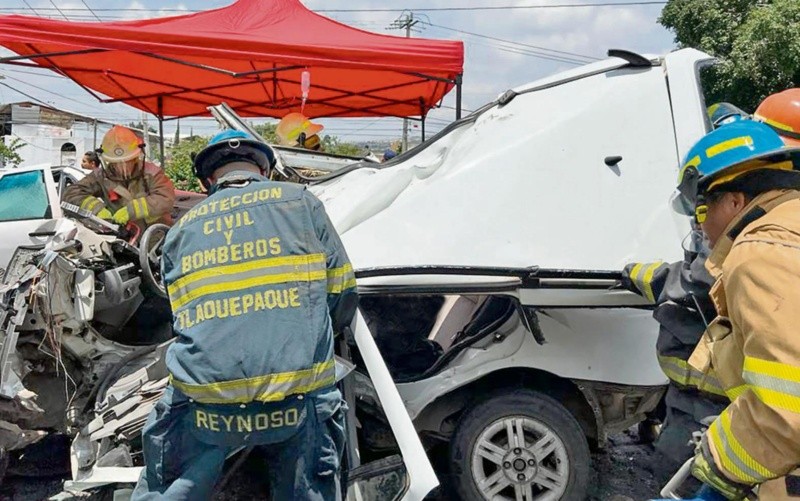 Firefighters helped free the injured who were trapped in the vehicles. The incident occurred at the height of the El Tapatío hotel. SPECIAL

Deaths due to road mishaps in Jalisco

Average. traffic accidents cause on average three deaths daily in Jalisco, according to the statistics of the State Council for the Prevention of Accidents (CEPAJ). They report that last year 1,005 people died in vehicular mishaps.

autopsies. Statistics from the Jalisco Institute of Forensic Sciences show that this year they have performed 254 autopsies for deaths in crashes and 134 deaths in rollovers.

ineg. The National Institute of Statistics and Geography reported that in 2021 in Jalisco there were at least 12,986 mishaps and 3,078 people injured in those incidents.

Index. At the national level, the Inegi reported 15 thousand 126 deaths due to road accidents, during the past year.

Idea. Regarding the month of occurrence of deaths from transport accidents, May stood out with 1,451 and December, which registered 1,419 cases. Fewer incidents for this cause were recorded in September with 1,096 cases.

The accident recorded on the road to Chapala and Avenida de las Rosas yesterday, where there was a deceased, has not been the only one. Only in the section from Lázaro Cárdenas to Periférico there have been 26 people who have died due to road accidents from 2015 to 2020, according to the accident rate map of the Institute of Statistical and Geographic Information (IIEG), 19 of them in the road in the direction of Guadalajara.

At that particular intersection, the number of events rises to 16, with 45 injured and two dead.

According to the interactive map, the crossings of the highway to Chapala with Periferico, as well as that of Lázaro Cárdenas, are the most conflictive.

In the first there have been 35 accidents where seven people have died and 38 have been injured. In fact, it is the third point where more accidents have been registered in the entire municipality of Tlaquepaque.

While in the second, at the crossing with Lázaro Cárdenas, there have been 24 accidents, in which two died and 38 were injured.

According to the IIEG, during 2021, Jalisco ranked third in the national ranking of fatal traffic accidents with 277 cases.

There are regulatory flaws

Roberto Ulises Estrada, President of the College of Urban Mobility Professionals of the State of Jalisco

Roberto Ulises Estrada, president of the Association of Urban Mobility Professionals of the State of Jalisco, considers that the lack of regulation of schedules, signs and speed in highway entrances are the current failures that cause accidents like yesterday’s.

Estrada emphasized that the trailers that arrive with cargo in the city do not regulate their speed when entering where there is already urban movement. “Add to it that the cargo trucks go from 80 kilometers up, due to the weight capacities it is very difficult for them to stop. That El Tapatío curve has no control points,” he commented.

A reform to the Mobility and Transportation Law of the State of Jalisco to regulate the traffic schedules of heavy-duty vehicles is an option so that there are no more accidents of this type in the city during peak hours. 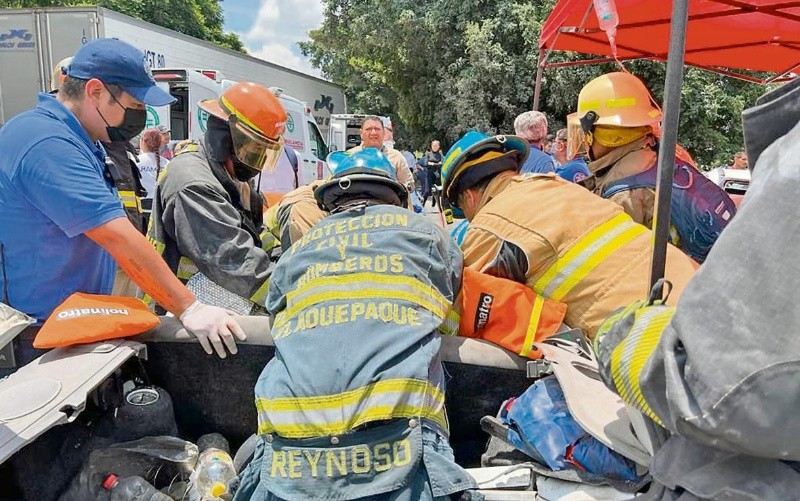 In the last administration, the activist Hilda Caballero launched a petition on the change.org platform where she calls on the SCT’s Federal Motor Transport Directorate to ban the circulation of double-trailer trucks in the country. The petition was delivered to the PAN deputies in the Congress of the Union.

It arose after the death of his son, Patricio Floresmeyer Caballero, 22, in a crash with a speeding double-trailer truck.

After the support achieved, the new goal of the activist is to reach 120,000 signatures with the aim of creating a citizen initiative to reform Article 50 of the Law of Federal Roads, Bridges and Motor Transport.

Regulations in other countries

USA. Its presence is allowed in all states, but it depends on its weight and length. The longer and heavier, the fewer states its circulation is authorized. The only vehicle that can pass through the entire territory is the one with two boxes of 8.6 meters each.

Canada. In the Alberta region, for example, trucks with up to triple trailers with a maximum length of 35 meters and 53.5 tons are allowed.

Australia and Europe. Only double trailer vehicles with a maximum length of 23 meters and a weight of 68 tons are authorized.

Are there signs missing on this road section?