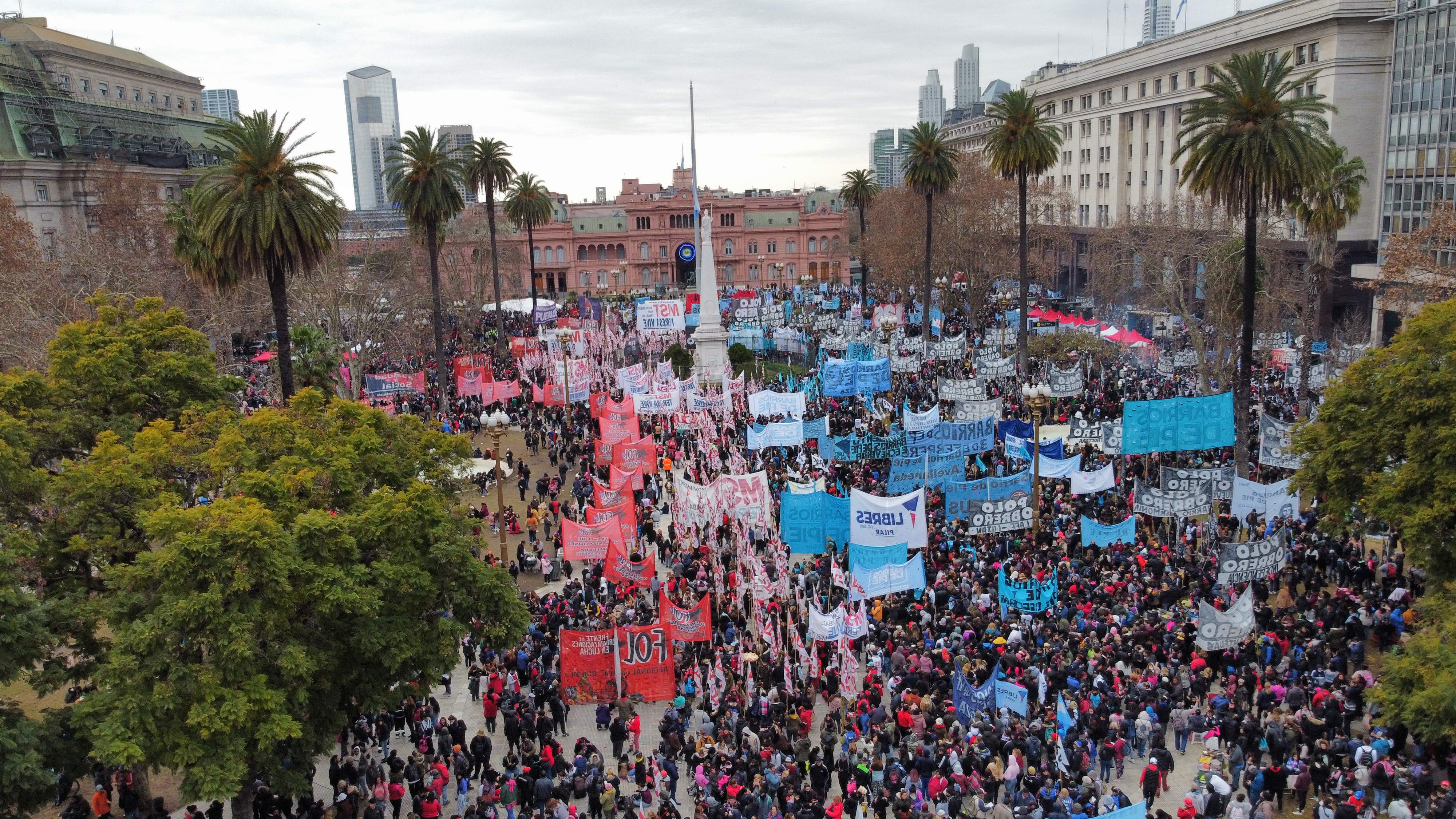 It will be a great variety of claims displayed by streets, avenues and the main political symbols in the City of Buenos Aires. On Thursday, from 10 in the morning, the Piquetera Unit, on the one hand; and the Movement of Excluded Workers, headed by Juan Grabois, on the other, will mobilize to demand changes in social policy from the government of Alberto Fernández.

The picketers, coordinated by Eduardo Belliboni, from the Polo Obrero, Silvia Saravia, from Barrios de Pie-Libres del Sur, and Mónica Sulle, from the MST-Teresa Vive, among others, will again march to Plaza de Mayo to demand “a plan of public works with genuine work”, “universalization of social programs”, a “bonus or reinforcement of Income of 20,000 for Retirees, monotributistas, precarious and Empower Work”, “Minimum Vital and Mobile Salary of 105,000 thousand pesos, in line with poverty” and “rejection of the criminalization of those who fight”.

The slogans are the same ones that the left picketers have claimed since the beginning of the year. Yesterday, 48 hours before the new mobilization, with the threat of camping, and in the midst of social tension and the growth of the mobilizations carried out by popular left-wing organizations and those that make up the Front of All, the President, in the midst of the discussion with the field, announced a bonus of 11,000 pesos for the more than 1,300,000 beneficiaries of the Work Promotion. “The measure, although insufficient, is a first victory for the combative piquetero movement against the adjustment,” Belliboni interpreted as soon as he heard the official announcement. 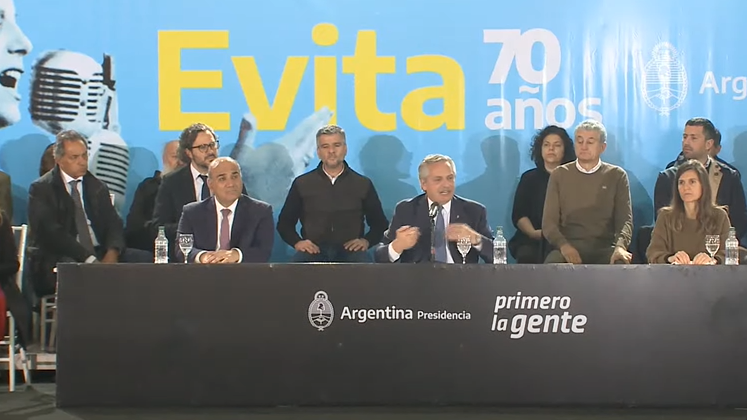 From Chapadmalal President Alberto Fernández announced a bonus of 11,000 pesos for the beneficiaries of the Empower Work program

From the Grabois MTE, they also celebrated the measure. “In the last few hours, the bonus for Empowering Work was confirmed, one of the claims that included the demand statement promoted by the Autonomous CTA, La Poderosa, OLP, Movement of Excluded Workers (MTE), Popular Front Darío Santillán, Nuestramerica and the Piquetero Party, among others”, they spread through a statement.

Despite the official announcement, both groups confirmed the mobilizations that they will carry out tomorrow. Grabois, Esteban “Gringo” Castro, Hugo Yasky, and Dina Sánchez, among other leaders who are part of the official UTEP, aligned with the Government, will also return to the streets to insist on the Universal Basic Salary.

From 10 in the morning, they will gather at the Obelisco Porteño, where they will hold an assembly to resolve new measures. The day will be the third of a plan of struggle that began on July 13 with more than 450 assemblies throughout the country and continued on July 20 with rallies on the main routes of the country whose epicenter was the Pueyrredón Bridge in Avellaneda. From that stage, Grabois thunderously told Fernández: “It’s easy, Alberto, we put you there so that there is less poverty, not so that there is more”, and launched: “If you don’t like the universal salary, invent something else . Do not say that you have to calm the markets, come and calm us”. 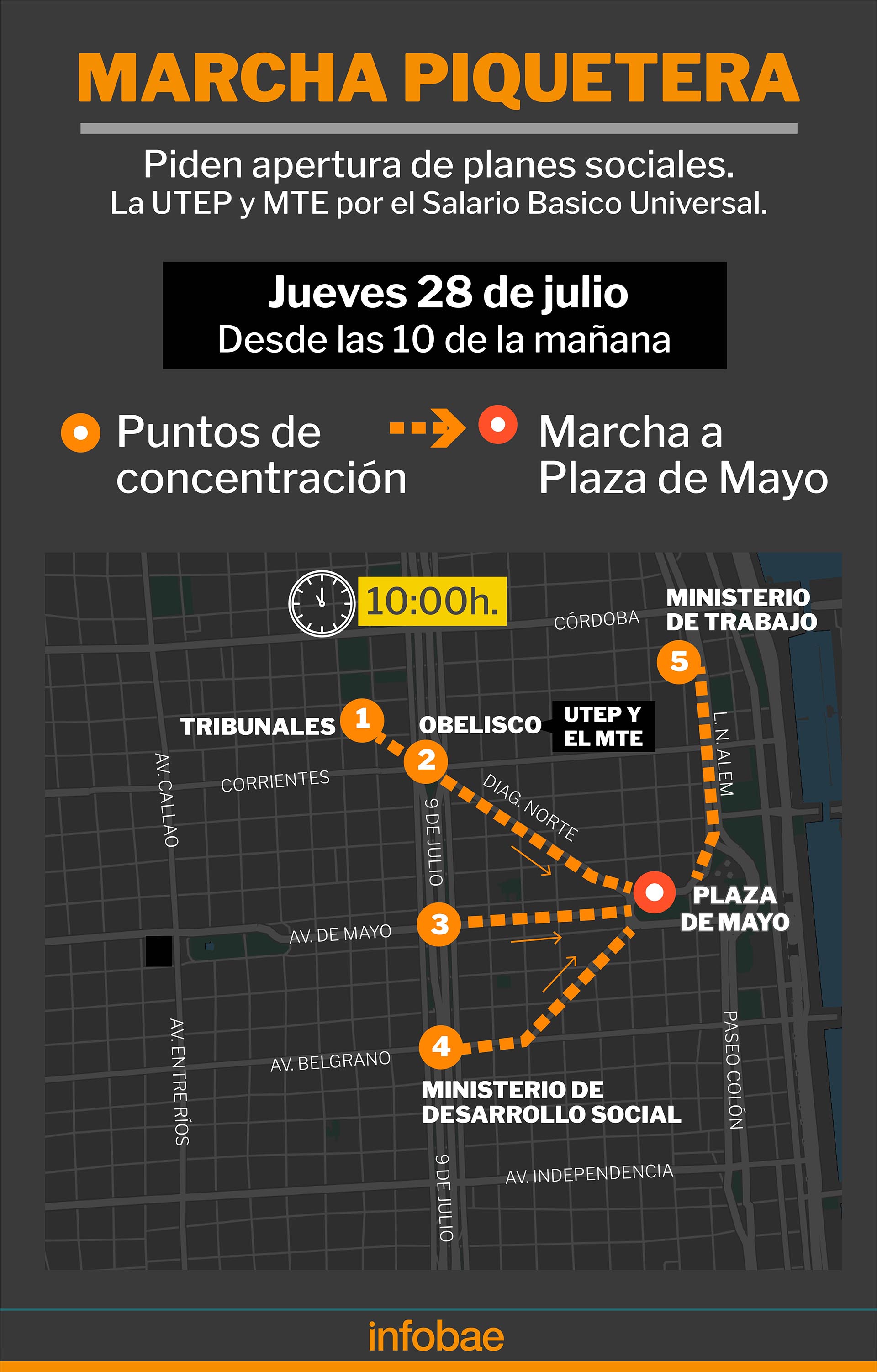 Beforehand, at 9 in the morning, they will send a delegation to participate in the act that the Piquetera Unit will carry out in front of the Talcahuano Street Courts to denounce an alleged “judicial persecution” and “criminalization” against the popular movements. They will also be joined by the Clasista and Combative Current (CCC), the organization led by deputy Juan Carlos Alderete. A month ago, some thirty dining rooms and homes of that organization were raided in the framework of an open case during the government of Mauricio Macri and in which alleged irregularities in the management of social plans are being investigated.

After the press conference in Courts, that column, headed by the Polo Obrero, will march to Plaza de Mayo. The concentrations that will meet at the Ministry of Social Development, the Ministry of Labor and on Avenida de Mayo, at the height of the National Congress, will do the same.

“The government continues to think and submit to the markets and to the big businessmen and did not respond to a single one of the claims of the unemployed and employed workers,” Belliboni points out, justifying the mobilization at Plaza de Mayo on Thursday and recalls that: “Neither neither the CGT nor the CTA are up to the level of this true setback that our people are suffering”. 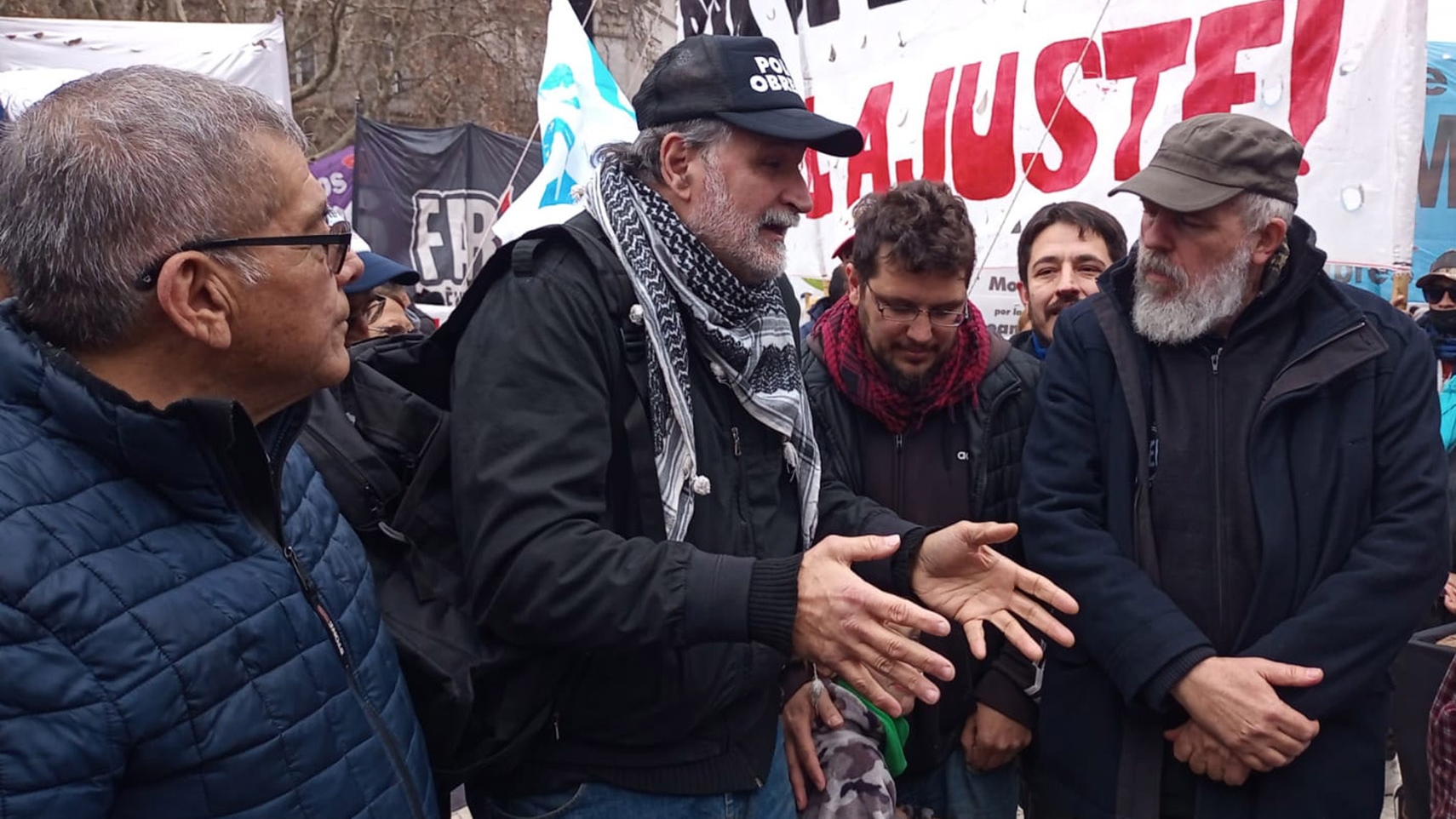 Eduardo Belliboni, Esteban Castro and Juan Carlos Alderete will protest in front of the Courts against an alleged “judicial persecution” and “stigmatization”

These marches will not be the only ones. On Saturday, Barrios de Pie, one of the official organizations led by Daniel Menéndez, in turn an official of the ministry in charge of Juan Zabaleta, will protest against the Argentine Rural Society. He will do it during the opening ceremony of the exhibition that the field holds every year at its Palermo property.

That day, Nicolás Pino, the president of the agricultural union entity, will be given “a letter in which we will convey our concern about the social situation that the country is going through, with malnourished children, while the field had a record harvest, and still This is how they ask for more, attacking society,” Menéndez told Infobae and announced that: “We are going to demand that the producers liquidate the soy so that those dollars enter the Central Bank.”

As had not happened since the Frente de Todos came to power on December 10, 2019, the streets were packed with protesters who respond to leftist and pro-government organizations. 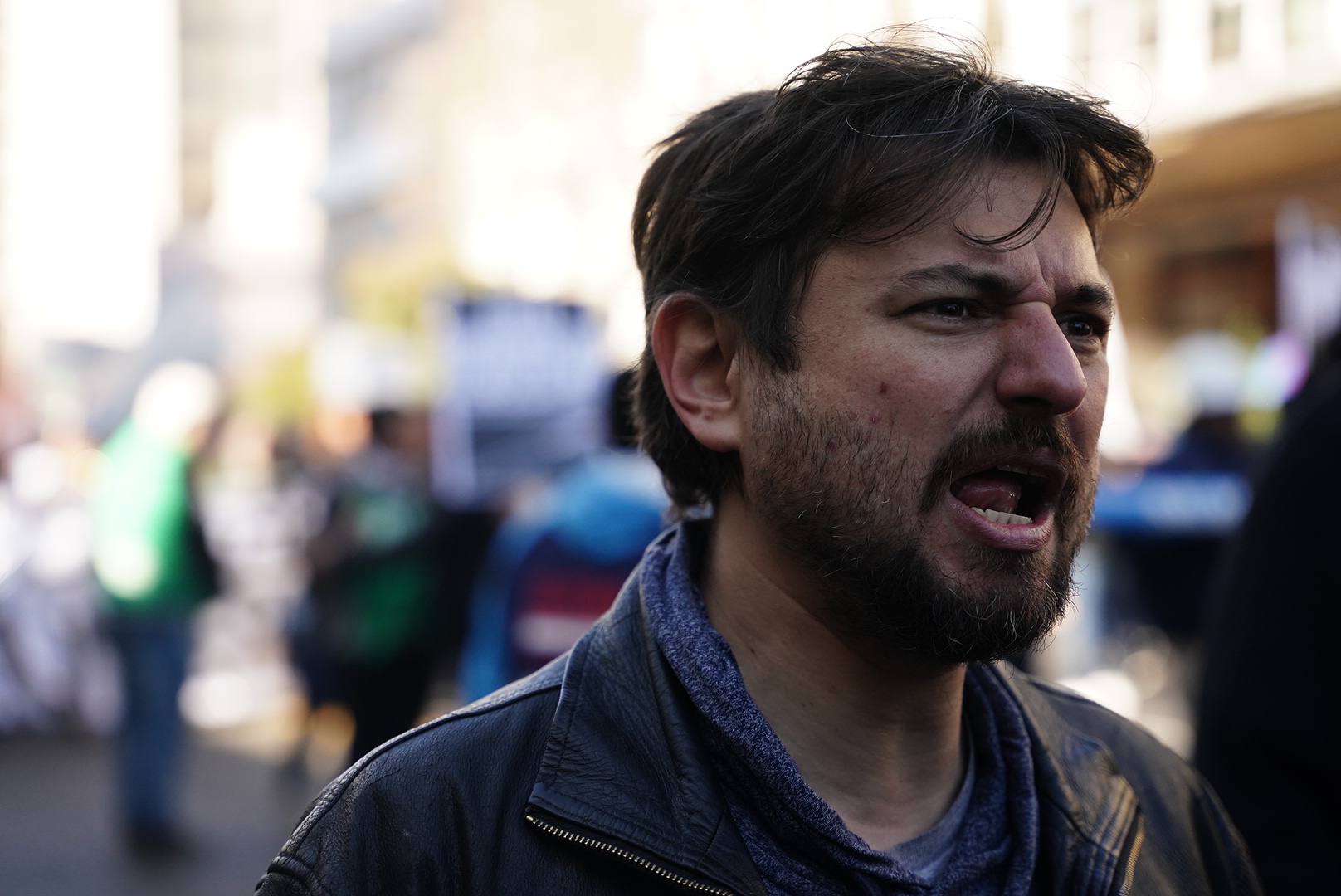 Juan Grabois, leader of the MTE, will demonstrate again for the Universal Basic Salary (Franco Fafasuli)

“There is a wide range of claim offerings. This speaks of the social and economic situation that the country is going through”, explains a social leader who is a member of UTEP and reveals that this organization is considered the union of the popular economy: “It has its own set of demands that are voted on in plenaries such as the one that emerged during the May 1 march, which is the General Law of Land, Roof and Work, which includes, among other laws, the Universal Basic Salary”.

Outside of that demand, each leader and space that they represent, outside of the UTEP leadership, are mobilized for claims that they understand are fair and that the Fernández administration does not attend to.

For this reason, the Grabois MTE, more linked to the Vice President than to the Head of State, usually supports most of the demands, including those of the Piquetero Unit.

This dynamic and internal alignment within the Frente de Todos makes it possible, for example, that the Evita Movement, one of the largest popular organizations, led by officials Emilio Pérsico and Fernando “Chino” Navarro, does not mobilize, in an organic way, to participate of the aforementioned claims. For example, they do not support Grabois’ demands on the SBU. Nor the protest in front of the property of the Argentine Rural Society.

Instead, the UTEP, with its top leaders at the head, will mobilize on August 7 from the Church of San Cayetano to Plaza de Mayo, as they have done since 2018. The main slogan is for “Land, Roof and Work”, although the organizers, who hope to gather half a million people, aspire to transform it into a march in support of Alberto Fernández.

A social movement close to the Government will march on Saturday against the Rural Social movements of the left and the ruling party strengthen their unity: they will protest together in the face of the social crisis