The 2022 Tour de France ends where it began, in Denmark, with the return home of winner Jonas Vingegaard. The Jumbo-Visma rider had a welcome worthy of the feat, between an escort of fighter planes, a convertible procession and a large crowd in Copenhagen.

Twenty-six years after Bjarne Riis, the first Danish winner of the Grande Boucle in 1996 – who admitted having doped after his career – the yellow jersey is entitled to honors from the balcony of the capital’s town hall, place of great celebrations of Danish sport.

Vingegaard impressed by the festivities

“It’s completely fantastic, completely crazy, I don’t realize,” declared the shy Jonas in front of a human tide colored with red and white flags, but also with yellow tunics, massed on the main square. 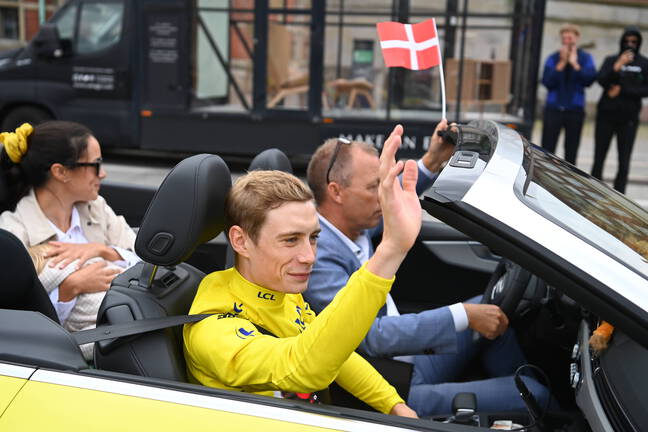 Three days after his coronation on the Champs-Elysées, he took out his phone to film the crowd, which started the Danish anthem to celebrate its 25-year-old champion.

“Vingegaard! Vingegaard! “, also shouted this floor, which filled the whole huge place. Two hours earlier, two Danish Air Force F-16s in red and white livery had earlier escorted the small private plane chartered by a sponsor to transport the Tour winner and his family. The Danish climber then boarded a convertible through the streets of Copenhagen.

Thousands of people lined the route, waving Danish flags and clapping the cyclist’s hand countless times. In a country that had already demonstrated its passion for cycling during the unprecedented start of the Grande Boucle, Jonas Vingegaard must then join the famous Tivoli amusement park, located just next door, for a new celebratory ceremony.

“The whole Tour through Denmark has been fantastic, but this Jonas welcome is still a cut above,” said Kasper Asgreen, present with other Danish cyclists on the Tour.