Referendum in Tunisia: day of half-hearted voting to adopt the new hyper-presidentialist Constitution 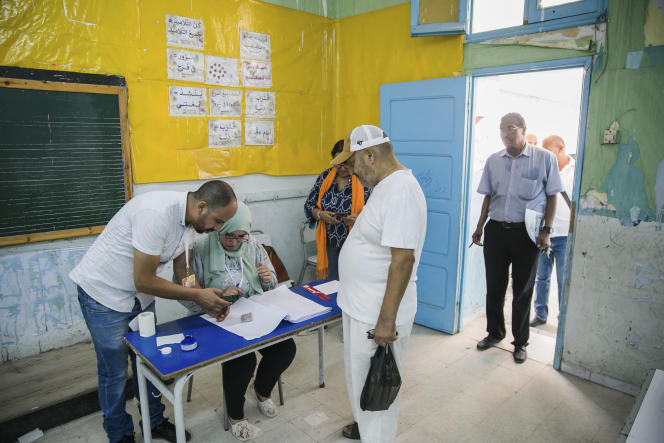 Tunisians come to vote for the referendum on the Constitution, in Tunis, on July 25, 2022. HASSENE DRIDI / AP

Hamza Oueslati’s face is tired from the scorching heat. Monday, July 25 at midday, the 34-year-old daily worker, wearing shorts and flip-flops, went to the polling station in the popular district of Hay Ezzouhour, in Tunis, to fulfill his electoral duty on this day of the referendum on the new Tunisian Constitution. “As in every election since the revolution [en 2011]I don’t want people to choose for me,” he says.

A desire that the majority of Tunisians did not seem to share. With a yes victory making little doubt – due to the boycott of the opposition – the main issue was the turnout. But this was weak. At the end of the evening, the Independent High Authority for Elections (ISIE) announced that at least 2.46 million voters, or 27.54% of the 9.3 million registered voters, had participated in the consultation, specifying that these were provisional figures. The “yes” would have collected between 92 and 93%, according to a poll out of the polls carried out by the Sigma Conseil institute. It will be necessary to wait until Tuesday for the ISIE to announce its official figures.

Fear of an autocratic drift

Earlier in the day, at the Denden polling center in Manouba, a suburb of Tunis inhabited by the middle class, Fatma Zahra Mujahidi, a 32-year-old university teacher, said she had come “above all for a change, whether good or bad”. “We must continue as young people to participate in the upheavals affecting the country, whether by voting no or yes,” she added. And the authorities had done what was necessary to allow this “participation” by opening the polling stations from 6 a.m. to 10 p.m., a very long period in view of the standards in force during other elections since 2011.

What was at stake was none other than the approval or rejection of the Constitution proposed by the President of the Republic, Kaïs Saïed. The text provides for the establishment of a hyper-presidential regime which breaks with the post-2011 political system – predominantly parliamentary – and which raises fears of an autocratic drift. The country had not had a constitutional referendum for twenty years. The last dates back to 2002 when the ex-dictator Zine El-Abidine Ben Ali wanted to remove the limit of three presidential terms in order to stay in power. The “yes” had then collected 99% of the votes. “We all knew it was rigged at the time, remembers Hamza Oueslati. We didn’t even bother to go and vote. But here it is different. With today’s choice on the Constitution, it is a project that emanates from the will of the people. During the campaign, many residents of popular neighborhoods expressed their support for President Kais Saied, in contrast to the massive opposition of the elites.

You have 60.25% of this article left to read. The following is for subscribers only.