He stepped aside attributing a series of irregularities in his sector. On July 25, Lieutenant General (r) Martín Parra Saldaña submitted his resignation from the position of Deputy Minister of Internal Order to the Minister of the Interior, Willy Huerta.

In the first lines of the letter, the former official indicates that on July 22 an agreement was made with the amount that would be offered for recent information to locate the whereabouts of former presidential secretary Bruno Pacheco and Fray Vásquez Castillo. 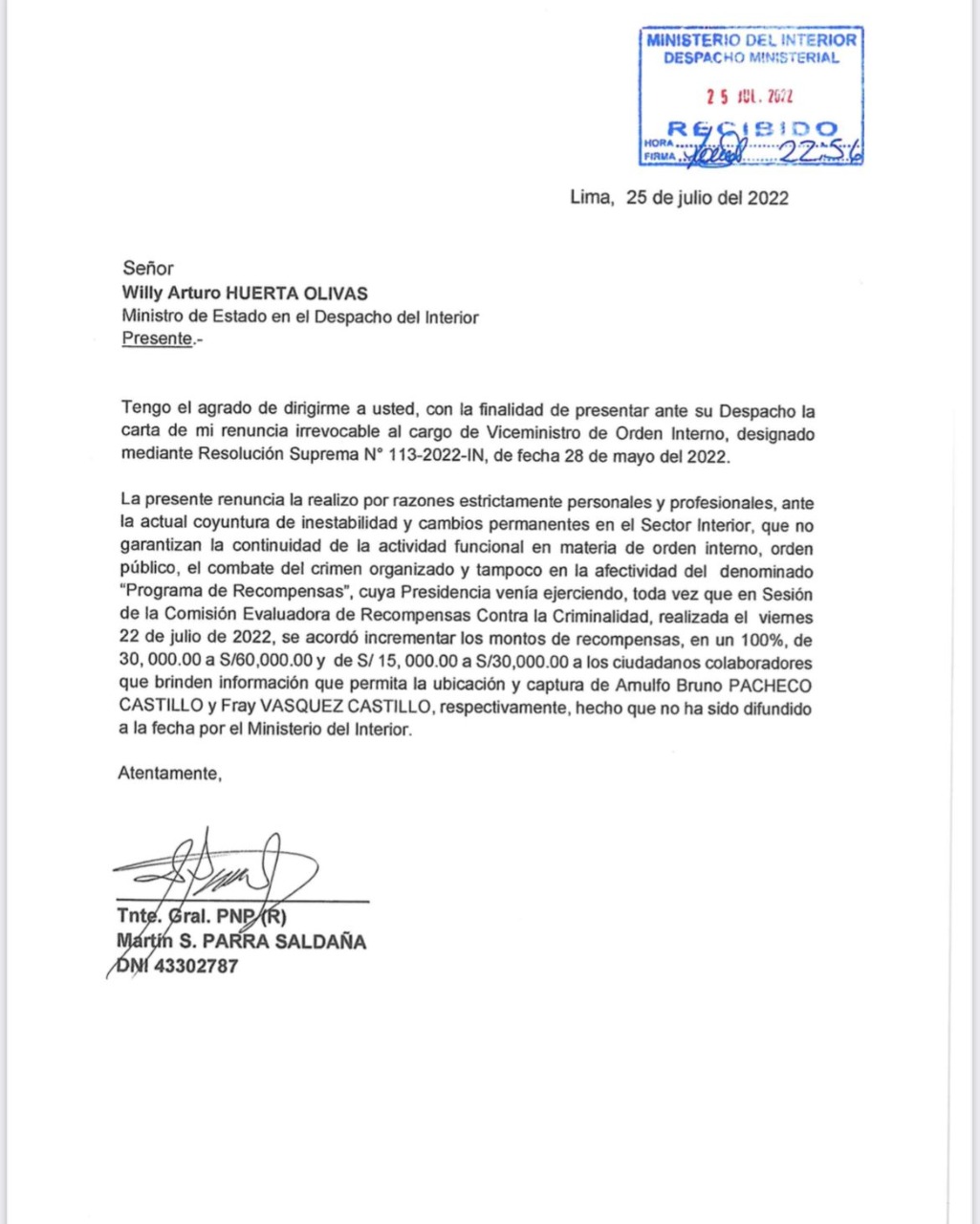 “This money would be offered to collaborating citizens who provide information that allows the location and capture of Arnulfo Bruno Pacheco Castillo and Fray Vásquez Castillo, respectively, a fact that has not been disclosed to date by the Ministry of the Interior”says Martín Parra Saldaña in his letter of resignation.

On the other hand, he specified that the decision to leave his position is due to the current situation of instability and permanent changes in the Interior sector, which, for him, do not guarantee the continuity of functional activity in matters of internal and public order.

“There is no work in the fight against organized crime and neither in the affectivity of the so-called Rewards Program”he added in the document that was made public before 11 p.m. on July 25.

The document has the reception stamp of the ministerial office, dated July 25 and 10:56 p.m. The sender’s full name, ID number and original signature are also displayed.

As it transpired in the last hours, Pacheco surrendered to justice when he was tired of being surrounded. In various media it was announced that on Saturday night the delivery of him was coordinated and he has already been collaborating for two days with the special team of the Prosecutor’s Office that investigates this case. In particular with the superior prosecutor Marita Barreto.

Approximately 90 days ago, 36 months of preventive detention were ordered for Bruno Pacheco, investigated for the alleged crime of aggravated collusion in a criminal organization in the Provías-Puente Tarata case.

As it is recalled, the former secretary general of the Government Palace was a fugitive from justice and they offered 30 thousand soles as a reward to anyone who provides information on his whereabouts. The story of the case starring Bruno Pacheco, who was the right arm of the President of the Republic, Pedro Castillo, began in November 2021, after the scandals that linked him to alleged influence peddling in public institutions and the discovery of 20,000 dollars in the bathroom of his office in the Government Palace.

A few days later, the former official submitted his resignation from the position of secretary general of the Presidential Office and since then, he has been treated as an effective collaborator. However, Bruno Pacheco repeatedly denounced that he was receiving death threats along with his family, as he stated, because his statements could bring down the government of Pedro Castillo.