After a user on social networks accused Banco Azteca of emptying his savings account, the businessman and owner of said banking institution, Ricardo Salinas Pliego, responded that it is difficult to take care of account holders if they themselves do not start by taking care of their personal data.

The businessman Salinas Pliego assured that in 24 hours the young man would have an answer about his case but also gave you a recommendation not to share personal information.

“In less than 24 hours I will solve this, they tell me that they are reviewing the movements. HELP THOSE FROM THE BANK BY NOT SHARING your personal information, it is difficult to take care of them if you do not take care of yourself. At Banco Azteca WE DO NOT ASK FOR, NOR DO WE CONFIRM any personal data of clients,” the president of TV Azteca wrote on his official Twitter account. 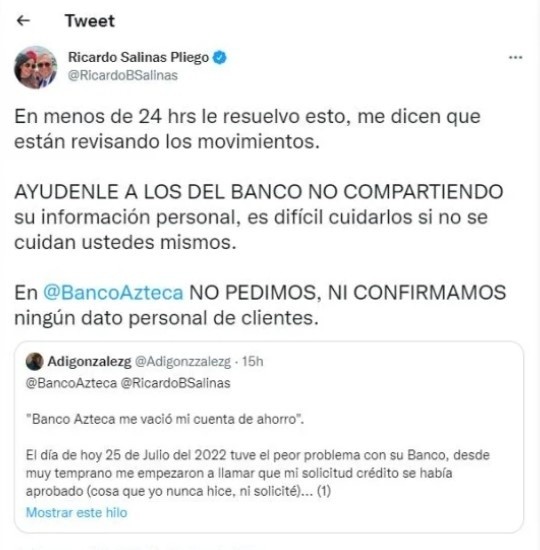 It should be noted that the complaint was generated after Ricardo Salinas commented on the theft of the savings of the actress Verónica Bravo from the BBVA application.

“Well, THAT WOULD NOT HAVE HAPPENED TO HIM IN Banco Azteca, and if somehow it had happened to him and I found out, I would return each peso… as I have always done,” wrote the owner of Grupo Salinas.

Because of this, it went viral. a new complaint in networks about a new robbery from a banking application, but now in Banco Azteca.

It all started when the user on Twitter, Adigonzalezg accused Banco Azteca of transferring his savings amounting to more than 120 thousand pesos to another account that he did not know. Through a thread of Tweets, the netizen reported: 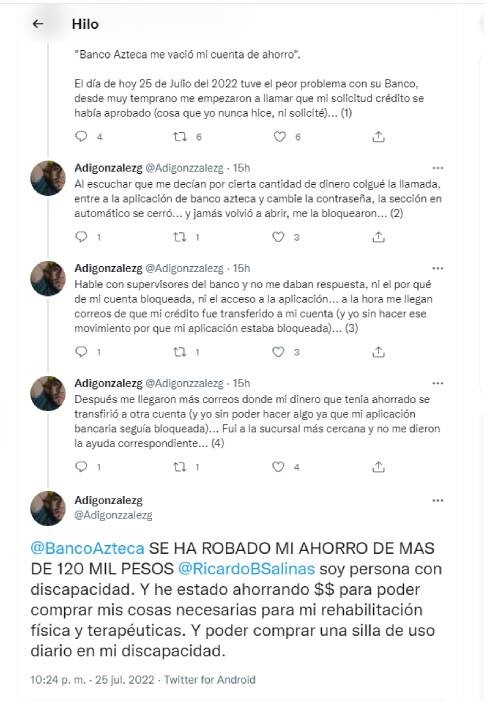 “Banco Azteca emptied my savings account. On July 25, they started calling me very early that my credit application had been approved (which I never did, nor did I request).”

“Hearing that they told me for a certain amount of money, I hung up the call, entered the Banco Azteca application and changed the password, the section automatically closed… and never reopened, they blocked it for me.”

“Then I received more emails where my saved money was transferred to another account (and I couldn’t do anything since my banking application was still blocked)… I went to the nearest branch and they didn’t give me the corresponding help”, told the young man identified as Adigonzalezg.

Likewise, the user maintained that his savings They amounted to 120 thousand pesos and that they would be used to buy the necessary tools for their physical and therapeutic rehabilitation.because he is a person with a disability.

20 pesos bill: It will be replaced by 20 commemorative coins

Twitter: Elon Musk backs down and agrees to buy the social network, according to Bloomberg

Dollar: How much is the currency selling for this Tuesday?