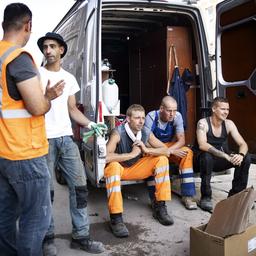 A European umbrella organization of trade unions is calling on the European Commission on Monday to set a maximum temperature at which people can work safely in the open air. Three workers were killed on the job in Madrid during the recent heat wave.

A number of European member states, including Belgium and Hungary, have already legally established the temperature up to which they may work. But the thresholds differ and in many countries such maximum temperatures do not even exist. One such country is France, where, according to the umbrella organization, twelve people died in 2020 from heat-related accidents at work.

23 percent of workers in the European Union are exposed to high temperatures about a quarter of the time. This is evident from a poll by research agency Eurofound. If only agricultural workers are considered, that percentage rises to 36 percent. For construction workers, this is 38 percent.

“Workers are on the front lines of the climate crisis every day and must be protected from the ever-increasing threat of extreme temperatures,” said Claes-Mikael Stahl, deputy secretary-general of the European Trade Union Confederation (ETUC). The umbrella association represents more than 60 million European trade unionists.

“Politicians can no longer ignore the danger posed by vulnerable workers while sitting comfortably in air-conditioned offices themselves.”

It is not known what temperature the union umbrella represents. According to the World Health Organization WHO, the optimum working temperature is between 16 and 24 degrees.