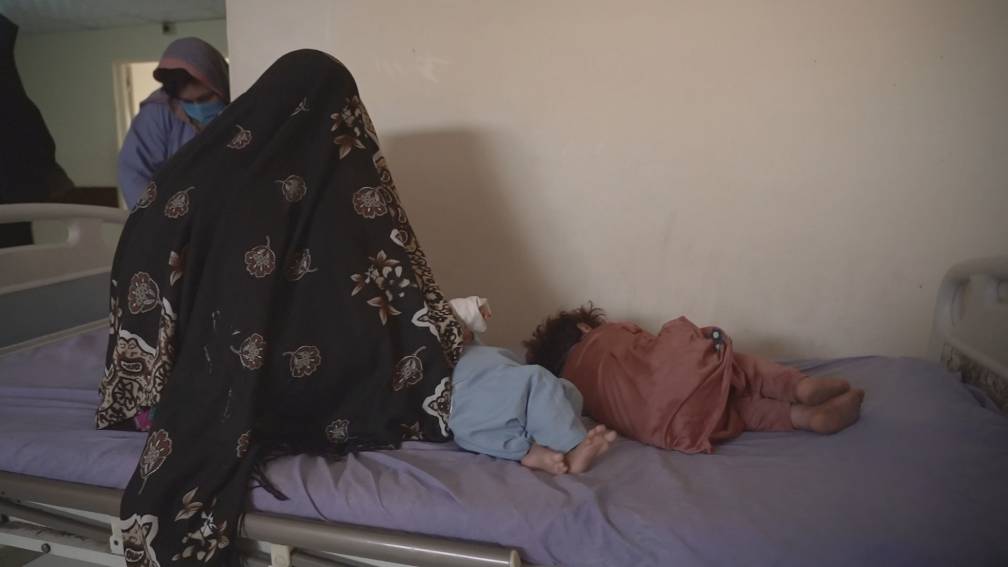 The children’s ward of the provincial hospital in the Afghan province of Uruzgan is constantly crying. There are about forty children, divided over different rooms. They are all severely malnourished.

Pediatrician Mohammad Waris Rahimi examines a baby’s papers. The girl looks like a newborn, but is five months old. Her weight is noted next to her age: only 2.7 kilos. “That is a result of the major economic problems,” says Rahimi.

The doctor estimates that 30 percent to half of all children in Uruzgan are malnourished. “The parents usually have no money to come to the hospital. They only come when there are complications. Most children here have diseases such as pneumonia or diarrhea in addition to malnutrition.”

Uruzgan, where the Dutch army conducted a military operation from 2006 to 2010, has always been one of the poorest provinces in Afghanistan. Yet the scale and seriousness of today’s malnutrition problems is unprecedented.

The rest of the country is also doing badly. The UN estimates that 95 percent of Afghans do not have enough to eat and that more than a million Afghan children under five will become severely malnourished this year. Large-scale food aid by the UN and other aid agencies has thus far prevented a real famine.

A farmer at work in a field in Uruzgan

Millions of Afghans lost their income after the Taliban took power in August last year. Under the previous government, government and economy were largely kept afloat thanks to foreign aid money.

But after the Taliban ousted the government, foreign aid funds dried up. More than 9 billion in international assets were frozen by sanctions and many aid organizations withdrew completely or partially. Afghans who worked for the government or an international aid organization lost their jobs and income, or had to settle for a much lower salary. And that in turn led to shops, restaurants, hairdressers and street vendors losing their customers.

In addition, the country was hit by extreme drought, which resulted in much less harvesting. Prices of oil, wheat and fuel, already higher due to the international situation, rose even further. Household goods now cost 50 percent more than a year ago, the World Bank reports.

All of this means that all Afghans will be hit extra hard. “Everything is expensive,” says farmer Taza Gul. He is working his small field of watermelons along the road between the provincial capital of Tarin Kowt and the district of Chora. Gul, a father of three young children, says he has never had any help from the government or NGOs. He tries to make ends meet on the produce of his own land and by working for other farmers. But it is no longer possible to make ends meet now that the prices are so high. “A bottle of oil, for example, how expensive is that now? And wheat? I have nothing to eat at home.”

Further on, in the village of Sarab Kakozai, Mohammad Ikhlas Ada shovels a layer of sand from the yard in front of his house. The house, made of mud and clay, was badly damaged by a flood two weeks ago. “The water has taken everything with it. I only have the clothes I’m wearing,” Ada says.

He and his family, all farm workers, also struggle with the high prices “We borrowed money for our daily expenses. Now the debt is so high that my older brother has left for Pakistan to earn money. No, here in the neighborhood is not work.”

Earlier we showed how some Afghan families choose to sell their children in order to survive:

Gull Khan Forqanyar, who is responsible for the economy of the Chora district within the Taliban government, agrees: “There is no work for the young generation”. And he mentions more problems: “We need clinics, roads that connect us to other provinces, and clean water. Children are getting sick from the water here.”

He sees no solution, and has pinned his hopes on the return of international aid organizations. “There are fewer aid organizations active now. A few, like the World Food Organization, are helping, but this isn’t enough for our people. It’s safe enough now, so I’m asking other organizations to come too.”

The provincial hospital is also struggling with shortages. Doctor Rahimi has great difficulty treating all patients. “We barely have water and only two pediatricians and one nurse. That’s not enough.”

It has been almost a year since the Taliban recaptured Afghanistan. Who are they and what do they want? An explanation:

Taliban rule Afghanistan again, who are they and what do they want?