Daphne van Domselaar played in a boys’ team at amateur club LSVV six years ago. In the meantime, the keeper has become the great sensation at the Orange squad at the European Championship in England. A story about a sober West Frisian woman who continuously surprises her environment.

It is the summer of 2017 when a total unknown is on the training field of FC Twente. She is seventeen years old, having just come over from Telstar’s promises and playing at the highest level for the first time. Her name is Daphne van Domselaar.

When Van Domselaar participates in a position game, the experienced players immediately approach trainer Tommy Stroot. “‘Who have you brought in now?’ they said,” says Leoni Blokhuis, Van Domselaar’s agent, who calls her a “natural talent”. “They were totally impressed.”

Despite her talent, it takes a long time before Van Domselaar starts playing football. She is only eleven years old when she registers with LSVV, a club from Zuid-Scharwoude, near Langedijk, the West Frisian village where she grew up.

Van Domselaar is initially not allowed to play football from her parents. “Daphne always played with boys, started dressing like a boy and really felt like a boy,” her mother Elly recently told the newspaper. NOS. “Then I thought: if she also starts playing football with boys, then it will be too much.”

That is why Van Domselaar has been involved in other sports such as kickboxing, fencing and volleyball for a long time. After playing volleyball for a few years, her mother gives her permission to play football, because she sees that Van Domselaar is “sorrowful” that she is not allowed to go to the football field.

Daphne van Domselaar as a fifteen-year-old goalkeeper in a friendly against Germany. 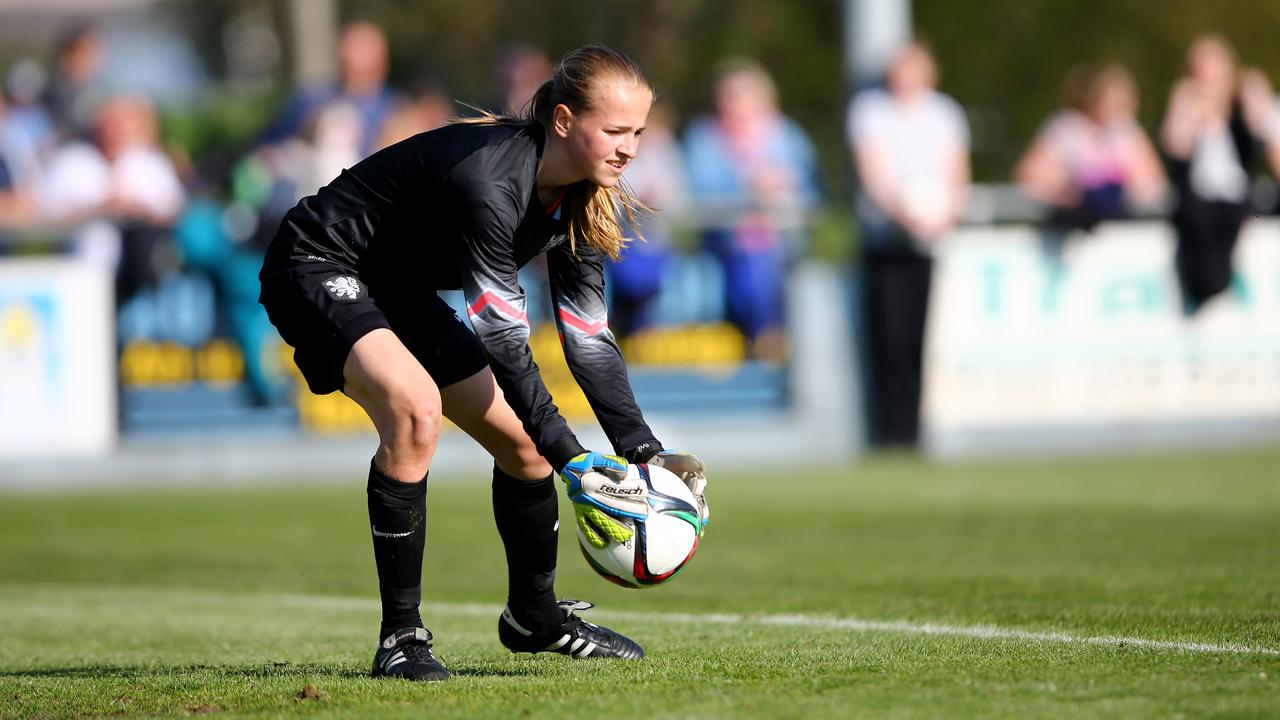 Daphne van Domselaar as a fifteen-year-old goalkeeper in a friendly against Germany.

Goalkeeper for four years with boys from LSVV

The girls’ team that Van Domselaar ends up in has no permanent goalkeeper, so players take turns standing under the bar. After the first time, Van Domselaar will never disappear from the goal again. Not even in the boys’ teams where she plays in the following four years.

In 2016, Van Domselaar deserves a switch to the promises of Telstar, who are currently playing in the premier league. The license of the women’s branch is taken over a year later by VV Alkmaar and the intention is that she will move to Alkmaar.

Until Van Domselaar receives a message from Stroot, the coach of FC Twente. He has been impressed by her during matches of the national youth teams and would like to include the goalkeeper talent in the selection of the record champion. “She was completely surprised when I called her,” Stroot recently told de Volkskrant.

It is a match of the Netherlands against Germany at the European Championship under nineteen years in Switzerland that convinced agent Blokhuis in 2018 to consult Van Domselaar for a collaboration. “She made a lot of saves. She really excelled and made the difference. Just like she does now.”

Daphne van Domselaar has been goalkeeping for FC Twente since 2017. 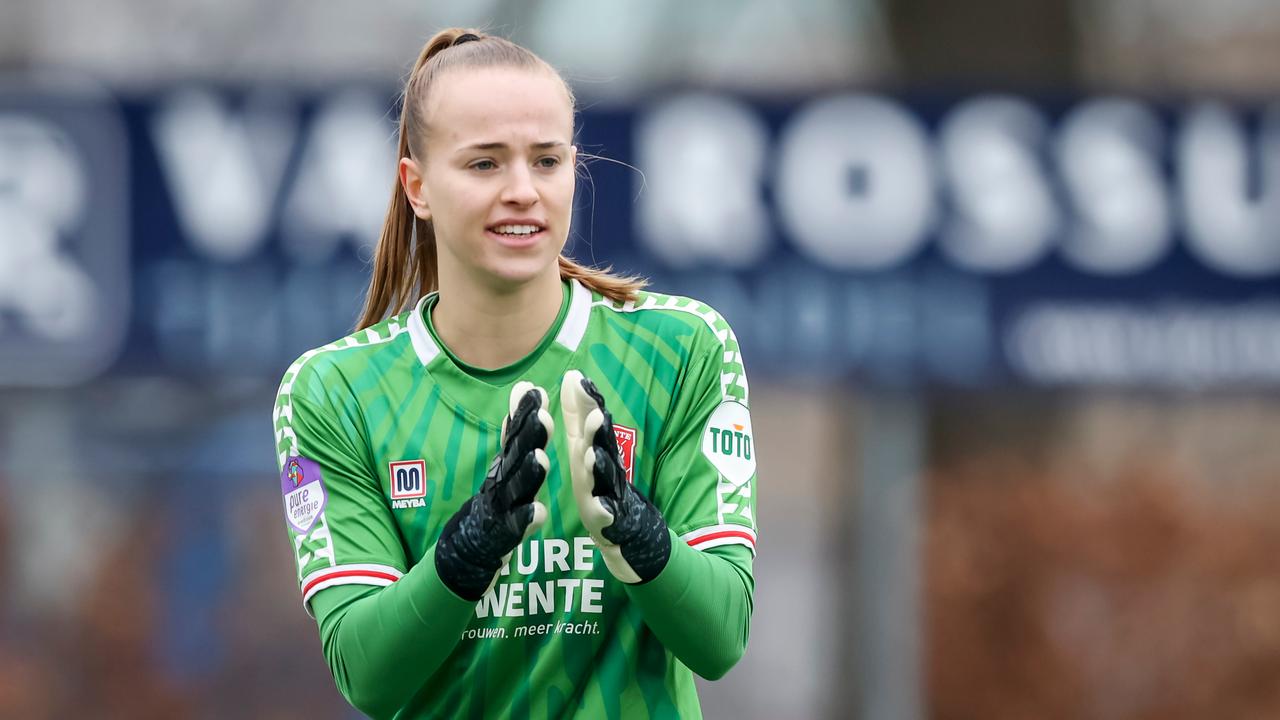 Daphne van Domselaar has been goalkeeping for FC Twente since 2017.

Not a European top club, but FC Twente

Blokhuis got to know Van Domselaar as a down-to-earth and smart woman: she has a pre-university diploma and is currently pursuing a bachelor’s degree in technical business administration. “She can think logically. She has both feet on the ground: what you see is what you get. And she knows very well what she wants and what she doesn’t want.”

This is also reflected in her career choices. According to Blokhuis, Van Domselaar was close to a switch to a “top club in the Champions League” during the winter break, far removed from her breakthrough at the European Championships. But in the end, the goalkeeper talent extended her contract with FC Twente by one year.

“Her ambition is of course to go to the top, but step by step,” says Blokhuis. “She is now the undisputed number one at FC Twente and I think she will be next season too. The chance of playing minutes is greatest there.”

“Clubs often have a good story, but you also have to dare and be able to see through it. Daphne wants to develop further and not end up on the bench. Then it is sometimes better to wait longer, and then take the step to the absolute top.”

Daphne van Domselaar performed a heroic role for the Netherlands in the duel with Switzerland. 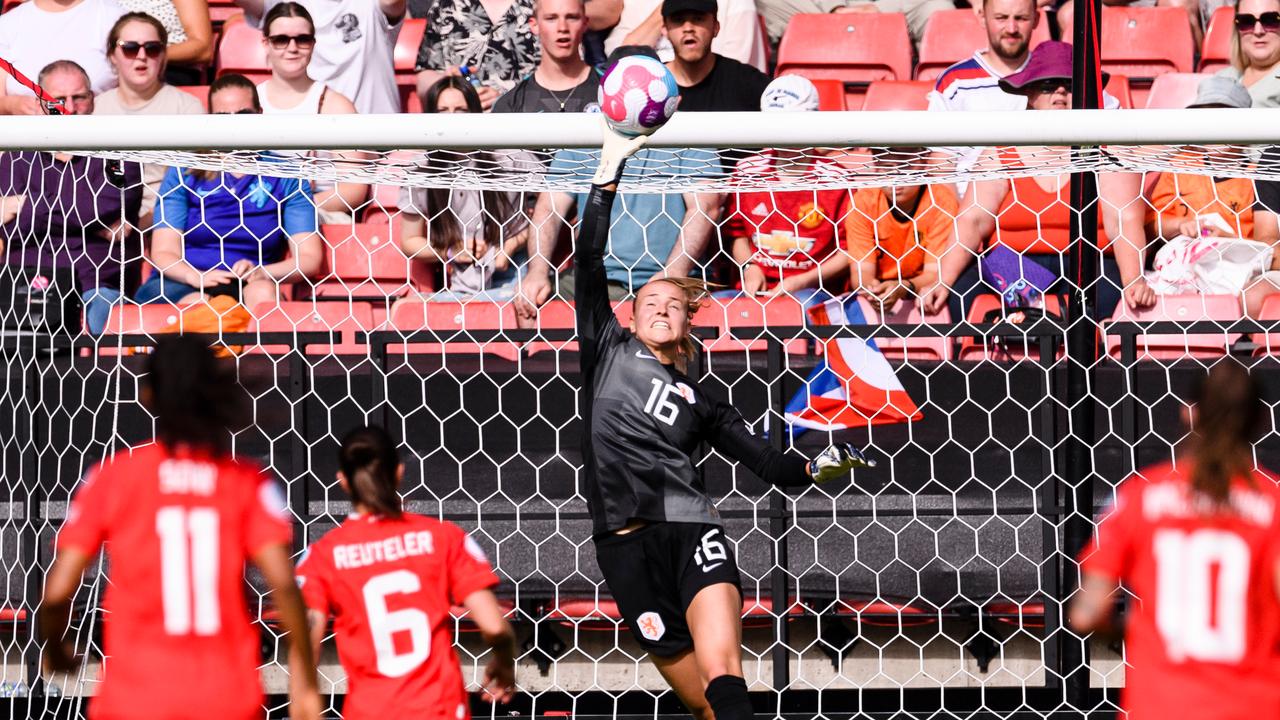 Daphne van Domselaar performed a heroic role for the Netherlands in the duel with Switzerland.

Top clubs line up after heroic role at European Championship

According to her, her down-to-earth character helped Van Domselaar when she suddenly had to replace Sari van Veenendaal during the European Championship. She didn’t have time to be nervous anyway due to the captain’s failure, but she also excels as a basic player under the bar.

The highlight is the last group match with Switzerland, in which the Netherlands falters after the 1-1 of the Swiss women. Van Domselaar keeps the Orange in the game with a nice double save, including a well-placed shot in the corner, hitting the post. The defending champion then runs out to 4-1 and a place in the quarter-finals is secured.

“Daphne is extremely proud and grateful that this has now been given to her,” says Blokhuis. “But she is also disappointed for Sari. On the other hand: she now has to make sure that no balls are flying around her ears, so she can’t sit with it for too long either.”

And that is going well for her for the time being. So good, in fact, that some top European clubs recently inquired at Blokhuis about the possibilities of Van Domselaar. After her performance at the European Championships, her possible future teammates will not be surprised this time if Van Domselaar excels on the training field.

With Van Domselaar under the bar, the Netherlands will play the quarterfinals of the European Championship against France on Saturday. The game in Rotherham starts at 9 p.m. (Dutch time). The winner will meet Germany in the semifinals, which was too strong for Austria 2-0 on Thursday.

Daphne van Domselaar is the new number one in the Netherlands for the time being. Daphne van Domselaar is the new number one in the Netherlands for the time being.