Helped by Carlos Sainz, Charles Leclerc will start in pole position in the French GP 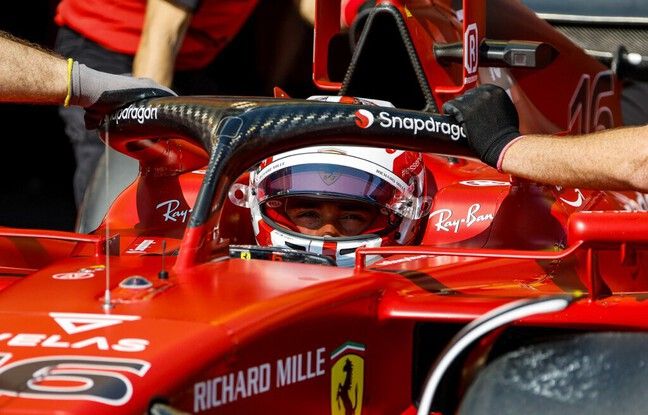 From our special correspondent on the Paul-Ricard circuit, at Le Castellet,

Charles Leclerc alone against the RedBull on Sunday. Ferrari driver Charles Leclerc took pole position this Saturday afternoon on the Paul Ricard circuit, at Le Castellet (Var), for the French Grand Prix. Dominating since the start of the weekend, the Ferraris repeated their performance in blistering heat with 30 degrees in the air and 54 degrees on the track. The Monegasque was (finally) well helped by his teammate Carlos Sainz, who offered him two nice aspirations to secure the pole, with a time of 1m30.872s. “Thanks to Carlos”, Charles Leclerc slipped into his radio at the end of the session, acknowledging the work done by his teammate.

Disappointment for the French

But the Spaniard will not be able to renew his help for the race on Sunday as he will start from the back of the grid after using a fourth engine. Charles Leclerc will therefore have to fight alone, for at least a large part of the Grand Prix, against the two RedBulls of Max Verstappen, 2nd and Sergio Perez, 3rd. Lewis Hamilton is 4th, ahead of his teammate George Russell.

On the French side, big disappointment for Pierre Gasly eliminated in the first qualifying session by only 16 tenths of a second. A performance all the more cruel that the Norman had carried out very good test sessions with the evolutions finally brought by his Alpha Tauri team. But the Frenchman will start from 14th place for the race on Sunday, since Carlos Sainz and Kevin Magnussen will both start from the back of the grid for having changed engines. His compatriot, Esteban Ocon, is not doing much better at the wheel of his Alpine with a 12th time, which will nevertheless allow him to start 10th on Sunday.