“Our house has been saved! “, rejoices a couple back in La Teste 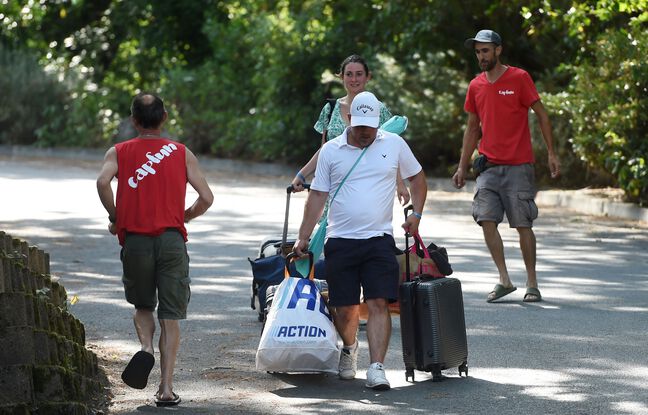 “The swimming pool, we haven’t opened it yet so I don’t know if it’s green”, announces Annie, 72, a resident of Pyla-sur-Mer, an upscale district of La Teste-de-Buch (Gironde). ). This Friday noon, she and her husband Patrick were able to return to their house after an evacuation on Monday, while the fire in the pine forest in progress since July 12 continued to spread. About 3,500 residents of northern Pyla-sur-Mer have been allowed to return home since Thursday evening, given the improvement in the situation. The fires in La Teste and Landiras are stabilized but still not fixed and the firefighters continue their interventions on the spot.

The septuagenarian was afraid of being robbed, fearing that the power cut would prevent the alarm from working. If the couple was stressed not knowing for how long he was leaving, he did not really fear for his house, in this sector relatively far from the fire, compared to neighborhoods like Cazaux. In the same way, a few blocks away, François Pacifico, 77, says he is especially relieved to find the calm of his house, bought in 1980. “We are still quite far, we were not very afraid . We left because it was the instructions. His wife is more expansive. “We are super happy, we saved our house! The firefighters were admirable, ”she says. They describe a smooth, well-supervised return, with the passage of the gas operator to check their installation.

The mayor of La Teste thought he lost his house

On his doorstep, Jean-Claude, 68, is working to meticulously clean the small twigs brought back by the wind during the fire and which blacken his terrace. He and his wife returned Thursday from their Bordeaux apartment to find their house left in a hurry on Monday. “I was scared when I saw the wind picking up at the foot of the Corniche and I thought there were a lot of gas cylinders there,” he recalls. They left with important documents such as passports and “some jewelry”. He says his “marked” wife, even without having had a fire at home, it was a difficult moment. “The whole forest has burned down here, we will have to see after the causes…, comments Jean-Claude. Me, in my opinion, all these campsites in the middle of the forest, it is not possible. »

A couple from Bordeaux are busy this Friday noon unloading their Tesla parked in front of their second home, in which they were on vacation when the evacuation sounded. “It was quite impressive when the gas cylinders exploded, testifies the 30-year-old, who does not wish to give his name. But it is better to leave than to want to stay and then risk endangering the firefighters to come and get us”.

In total since July 12, six homes and three restaurants have been destroyed in Teste-de-Buch. “We limited the breakage, underlines the mayor of the disaster-stricken municipality Patrick Davet. I myself have been evacuated and I am not yet at home. But my house might not have been there. Until 2 a.m. Monday night, I thought I was going to lose her. Some 13,000 Testerins are still waiting to return home.