Hot, hotter, hottest, especially in the cities. How should that be done in the future? 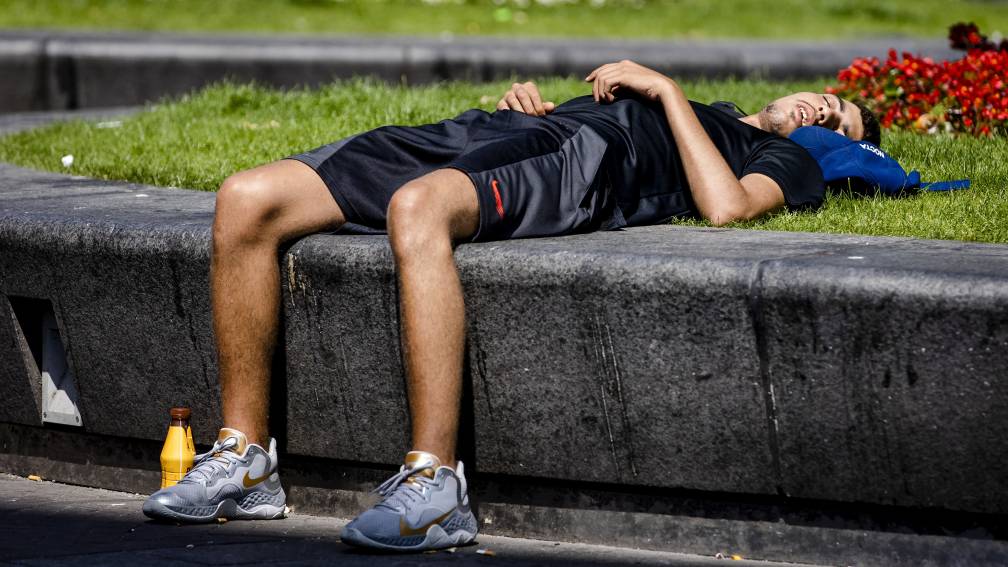 Temperatures of 35 degrees or higher, they are still exceptional in the Netherlands. But if climate change continues, we will have to take into account much more extreme heat in the coming decades. In particular, residents of cities feel this intense heat the fastest: in cities it is 4 to 8 degrees warmer than in the countryside. How should we deal with that in the future?

“The best thing municipalities can do is plant greenery,” says Jeroen Kluck, lecturer at Amsterdam University of Applied Sciences. He previously conducted research into heat in cities. Kluck is also on the road this week, doing heat research in Amsterdam. “A lot of stone and rubber tiles”, concludes Kluck about the location, a playground between the houses.

“Green provides shade, which is its main function,” says Kluck. It causes the temperature to drop. 10 percent more greenery in the city leads to a temperature drop of half a degree. “If the sun cannot shine on stone or asphalt, the surface heats up less. As a result, it also radiates less heat.”

Serious effects of the heat

Also according to Marian Stuiver, affiliated with Wageningen University & Research, more greenery is needed to keep cities pleasantly habitable in the summer in the future. “A lot has been built in recent years, in the summer you notice this in the cities. Business parks with only stone and concrete also only retain heat.”

The effects of heat are more far-reaching than is often thought, it turns out from research. Not only is extreme heat in the city bad for nature; the quality of drinking water decreases as a result, turnover in shops decreases and the electricity supply is jeopardized. Drought leads to a shortage of cooling water in power stations.

Stuiver sees that there is also a lot of inequality behind the current ‘heat construction’ in cities. “In neighborhoods with lower incomes and with a lot of social rent, such as flats, it is often more petrified. The possibilities for people to cool off in the greenery also vary greatly per neighbourhood.”

In the long term, this also has consequences for the health of residents. Extremely warm periods can lead to sleeping problems, but can also cause complaints such as headaches and serious breathing problems. Even heart failure is one of the risks of heat stress.

Yesterday a group of researchers went into Arnhem to measure the temperature in the city:

Climate cargo bike measures heat in Arnhem: ‘Heat can be detrimental to health’

Stuiver: “You can already see in Paris and Barcelona that people flee the city in the summer.” According to Stuiver, municipalities must intervene to prevent it from becoming too unpleasant. “The most effective are mature trees that provide plenty of shade and regulate heat through water evaporation with their leaves.” Trees lose moisture through stomata in the leaves, a process that has a cooling effect on the environment.

In addition, they provide a more pleasant feeling of temperature. They work like an air conditioner, Stuiver explains. “When there is wind, the leaves move back and forth. This makes the perceived temperature in the area more pleasant.”

Green roof not a solution

Floris Boogaard (Hanze University Groningen) also contributed to the research into heat in cities. Both he and Kluck see a solution in pergolas with climbing plants. Such plants grow faster than trees and also provide shade. Boogaard: “Heat stress is more common in inner cities, for example on large squares where no trees can be placed because of the space or the deep roots. You can use pergolas there.”

The two are less enthusiastic about green roofs, a form of planting for which many municipalities now provide subsidies. “Green on roofs is pleasant for the residents of a building, but it does not do much for the temperature on the street.”

To ‘arm’ the cities against heat waves, Kluck and his co-researchers made a number of recommendations. They argue that every home in the future should be no more than 300 meters away from a cool place in the open air. There must also be at least 40 percent shade on important walking routes.

Stuiver has another piece of advice for municipalities: adjust the mowing policy. “If a heat wave is coming, it’s better not to mow everything.” If the roadsides and lawns are mowed too tightly, the heat will destroy the grass and there will be no more greenery to absorb the heat. “What you’re left with is sand, which gets sweltering hot.”

For the long term, Stuiver advocates more alder, linden and elm trees and also large shrubs such as dogwood or buckthorn. “Preferably all kinds of species next to each other. Plant trees that can grow older than us. Then you are talking about a sustainable heat solution.”