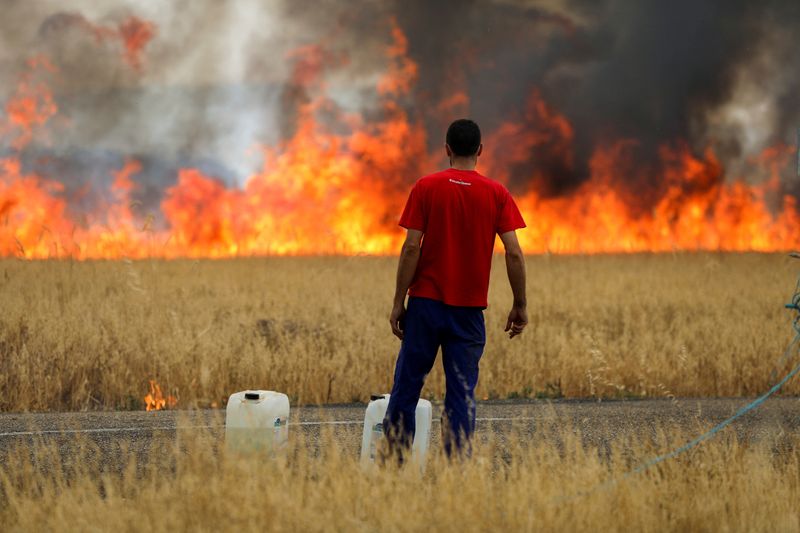 A shepherd watches a fire that burns a wheat field between Tabara and Losacio, during the second heat wave of the year, in Zamora province, Spain, July 18, 2022. REUTERS/Isabel Infantes TPX IMAGES OF THE DAY

TÁBARA, Spain, Jul 18 (Reuters) – A Spanish man trying to protect his village from a fire nearly died on Monday when flames engulfed his bulldozer, forcing him to run for his life as he doused the flames on his clothing. With his hands.

Ángel Martín Arjona had been digging a ditch in a field to prevent the fire from reaching the town of Tábara, in the province of Zamora, when the sea of ​​flames closed in on him.

Reuters footage showed him driving at high speed before turning near a fence. Seconds later his machine disappeared from sight, surrounded by high flames and smoke.

Arjona ran out of the flames, tripped and fell, and then kept running, his pants still burning and a firefighter in protective gear following him.

Arjona, a construction warehouse owner, was airlifted to a hospital with severe burns after his dramatic escape, his friend, mechanic Juan Lozano, told Reuters.

“Everything could have been burned, absolutely everything. It has been lacking… because there are good professionals and people give them balls (sic),” Lozano said.