August Dirks (70), captain of the Azart and co-founder of the theater company Ship of Fools, wanted to sail his ship to the Uluruberg in Australia for her last trip. But halfway through the trip, he turned out to be terminally ill. A look back at his life. “I thought I was special, but it’s the environment that’s so weird that I seem special.”

This article is from Het Parool. Every day a selection of the best articles from newspapers and magazines appears on NU.nl. You can read more about that here.

When August Dirks talks, he gestures vigorously with his hands and the bells ring on his wrist. The dark blue nail polish is peeling off his nails. “So your name is Dirks too?” he asks as the interviewer enters, his bright blue eyes squinting. “Distant family,” is the reply.

August Dirks was captain of the Azart, the Ship of Fools, also known as the Ship of Fools for many years. For thirty-three years the ship sailed around the world as a traveling theatre, with a changing crew of actors, artists and musicians. In the ports of Cape Verde, Greece and Russia they played absurdist performances for children and adults. Until September 2021.

“The miracle was true: The Ship of Fools is on top of the beach,” Dirks writes in the log. “Fifty-seven nautical miles south of the equator and a hundred and fifty meters beyond the Pacific Ocean.” In three acts he describes the last journey of the Azart. “Happy end. A very expensive performance but very memorable, all the more so because the ship is riding on wheels again and thus returns to its historical origin as a wheel barge or ship wagon, or the most exuberant cart of the carnival parade.”

It sounds like a story from a picaresque novel. Is this the end of the adventure?

“It’s over for me. I have no business there anymore. But for the Azart it is a new beginning. It is now near Manta, Ecuador, in a fishing village. We pulled her on the beach there. theater group from Quito has taken over her. There is a stand around it. In thirty years she will still be there, that has been agreed with the authorities.”

Azart, Ship of Fools, on the day of arrival at the beach in Ecuador in September 2021. A theater group from Quito has taken over the ship. 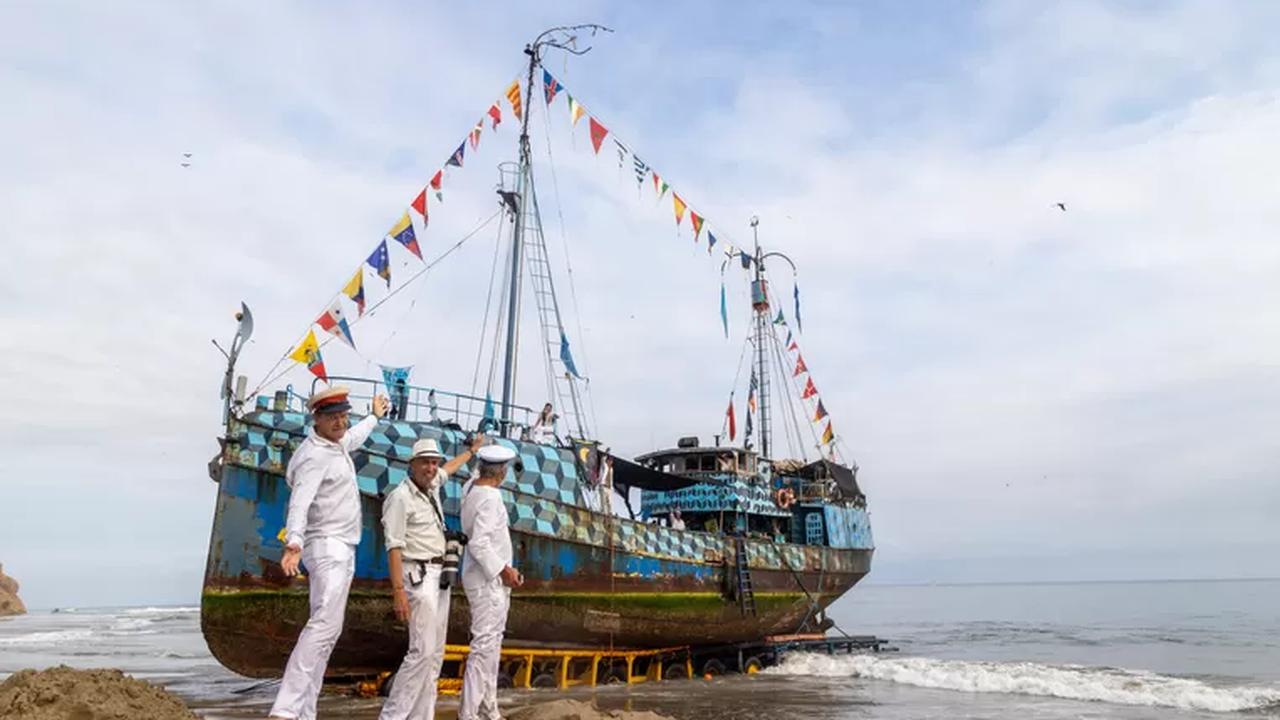 Azart, Ship of Fools, on the day of arrival at the beach in Ecuador in September 2021. A theater group from Quito has taken over the ship.

Did it hurt? Saying goodbye?

“It came a little too early for me. But that was due to my health, I got cancer. Then that tumor had to be cut out. I can walk a bit more difficult and can no longer move really well. Then you no longer have to go with a boat So that makes it easier to accept that the ship gets away in such a nice way. I got three months from the doctor, that’s almost a year and a half ago. So far the treatment is working.”

Do you see yourself as an artist or as a rebel?

“If both are, a bit. I’ve shaped my own life, built my own utopia, turned my life into a work of art. And I’ve always walked a bit sideways from society, or in my case: dangers.”

When did that start?

“I was a student of Russian in Amsterdam and had the idea to start a kind of exchange office for artists from Amsterdam and Moscow during perestroika. We called it CIRC. At that time, Russian artists were allowed to go abroad for the first time in seventy years, on invitation. But it didn’t matter who the invitation came from, so I just wrote them as a poor student myself. We held a squat office with some other students. I did that for a few years, until my father died. My brothers and sisters put the inheritance in their mortgage, very clever. I bought a ship with my 60,000 guilders. That’s how it started.”

“Because of Amsterdam. I saw an old barge, the Hydrograaf, in Amsterdam-North I believe. That was so beautiful. From 1920, when ships were still beautiful. Romantic.”

You bought an old herring lugger from 1916 with the idea of ​​turning it into a sailing opera ship and taking it to Russia. And then?

“Then we lay still. We were chained on the KNSM island for five years. The first opera went bankrupt. We had some problems with a lawyer and the promised subsidy for our tour to Moscow did not go through. In retrospect, good, because I couldn’t sail at all at the time. I put a few pigs on the ship so that it would become unattractive for sale. And then we started a nightclub over there on the KNSM island with illegal Russian vodka and cabaret. With the money we I could do with the old lady a little sprucing up to go touring.”

“We sailed around for fifteen years and played shows everywhere and nowhere. And then we had to be chained again in 2000, due to an incident near Alkmaar. Fortunately, we were then able to enforce that we could be chained on Azartplein, on our old place. We had no rights to lie there, but also no hassle with the harbor service, because of course they could not refuse. That square was named after us!”

Why did you want to try one more time to get the Azart out to sea?

“Why give it up if it still has a bright future? That’s the question to ask.”

I think a lot of people had given up. Why did you continue to believe in that floating theatre?

“Yes, what do you have to do? The ship is tied up, but that’s a matter of negotiation. It was nonsense. Nobody wants to buy it. That’s the secret of the Azart: she looks like floating scrap, nobody wants it You actually have an enormous position of power. I compare it to the Jehovah’s Witnesses with the blue clog. Once you are in the door, you can’t get it off. This is a blue clog of 180,000 kilos. And in the meantime, if you are still you can have the nicest You have to think of the ship as a free stage that you can put wherever you want. Plus, it’s a mobile sculpture that you can decorate as you please.”

Do you see it as art in itself?

“Yes. It is playing with geography. You are always in a fantastic environment, you are always part of a different landscape: a remote industrial estate, in the middle of a tropical river in Suriname, or in a medieval Italian village. always has something special.”

What was the goal in the first place? What did you want to achieve with it?

“Sailing. Get out. The Cuban Missile Crisis had deprived me of the ambition to achieve anything in society. I was an adolescent and thought: it makes no sense, they will shoot each other anyway. Humanity does not learn. From a social point of view, I got there quite early gave up. In retrospect you can say that I was sixty years too early.”

How did the Azart become the Ship of Fools?

“When I was bankrupt at the KNSM island, I came across the book Het gilde van de Blauwe Schuit, by Herman Pleij. It describes a thunder sermon from the Middle Ages about ‘the ship of fools’. The image that was sketched in it was a warning: on that boat sit the bad guys, the madmen, the people who are sent away. Many artists were inspired by that text. The book Das Narrenschiff by Sebastian Brant is based on it, as is the painting Ship of Fools by Hieronymus Bosch. I realized it didn’t matter – not that lawyer, not that withdrawn subsidy. Fools don’t need money, they live on nothing. An occasional sip of wine.”

What made this image so appealing to you?

“I took it as a challenge. Get out of this society. You are the fools, with your rules, problems and permanent crimes. It is total destruction. We are the ones seeking salvation, you are doomed.”

The role of a jester is also to hold up a mirror to society.

“That was exactly the point. I wanted people to ask themselves: am I crazy, or is it you? You are in a traffic jam to work, are you working the schompes to be able to pay the mortgage. I’m in give some nice little town in the sun an opera lesson, I’m not the fool. That was the mirror.”

Was humor just a means? Or a goal?

“If you come into communities and you want to attract as many audiences as possible, you have to make it a bit of a comedy show. Humor also makes it easy to get in. A madman with big ears, bells on his wrists and funny clothes on , is not seen as a threat. The goal was a smile.”

“No, of course not. I had to run a ship, negotiate with the port services, direct people, set up plays, map out routes. You can’t do that if you’re really crazy. In today’s society this is completely unthinkable. slipped through the cracks with that ship.”

Have you never thought: why don’t I just have an upstairs apartment in Amsterdam?

“No, not at all. I always thought of houses like this as a kind of coffins. You know those cemeteries in southern Europe? You get pushed in like that. It’s the same.”

But now you are there.

Are you afraid of dying?

“No. Maybe a little for the pain. But they have resources for that, nowadays. It’s actually banal to die of lung cancer at seventy, don’t you think? Very normal. I am finally recognized as an ordinary person. I thought I was special, but it’s the environment that’s so weird that it makes me seem special. I know what’s good, what’s beautiful and what’s important to someone, most don’t. It’s that simple. Then I’m not a fool, that’s you.”