Debate heats up between Downing Street candidates ahead of decisive week 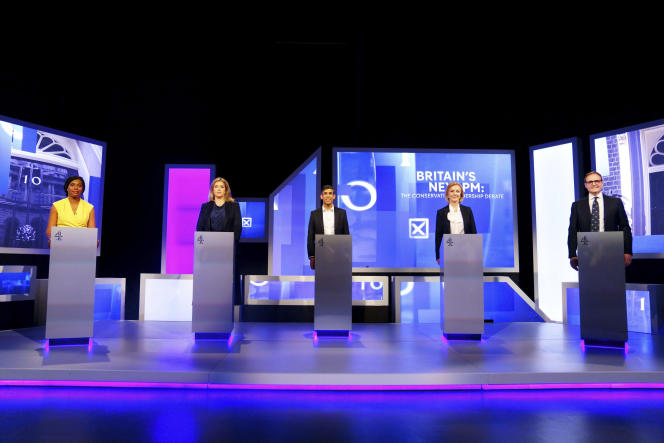 The candidates to succeed British Prime Minister Boris Johnson met on the evening of Sunday July 17 for a second televised debate which was livelier than the previous one, as they began a decisive week in the race for Downing Street.

They are still five in the race for power launched after the announcement on July 7 of the resignation of Boris Johnson, swept away by an avalanche of departures triggered by an overflow of scandals and lies.

Read also: In the United Kingdom, eleven candidates in the running to succeed Boris Johnson

Secretary of State for International Trade Penny Mordaunt, ex-finance minister Rishi Sunak, head of diplomacy Liz Truss, ex-secretary of state for equality Kemi Badenoch and MP Tom Tugendhat were around of the table. They begin a decisive week in the race for Downing Street: after several votes by Tory deputies, we will know on Wednesday evening the names of the two finalists, who will be decided during the summer by members of the Conservative party. The name of the future Prime Minister will be known on September 5. The face-to-face turned out to be much livelier than the previous televised debate on Friday, during which the five contenders for power refused to clash and personal attacks.

This time, the head of diplomacy Liz Truss set the tone by directly attacking her former colleague in government Rishi Sunak from her first speeches, accusing her of having led the country into “recession” by increasing taxes when he was finance officer. Former Defense Minister Penny Mordaunt also attacked the former Chancellor on the subject, she who suggested borrowing to cope with the cost of living crisis which is strangling British households, with record inflation at 9.1% in May.

Conservative party leadership contender Liz Truss looks on before the live television debate for the candidates for leadership of the Conservative party, hosted by Channel 4 in London, Friday, July 15, 2022. (Victoria Jones/PA via AP) VICTORIA JONES / AP

“That’s socialism,” Rishi Sunak shot back. “Even (former opposition leader) Jeremy Corbyn wouldn’t have gone that far! Ms. Truss and Mr. Sunak have been at loggerheads since the start of the campaign. The 46-year-old candidate is the darling of the Johnson camp, which is convinced that Mr Sunak had been biding his time for months before stepping down on July 4, precipitating the Prime Minister’s downfall. What supporters of Rishi Sunak deny. Going on the offensive, Liz Truss tried to catch up as the bookmakers relegated her to third place behind Penny Mordaunt and Rishi Sunak, neck and neck.

On Saturday, a poll conducted by the Conservative Home site among its conservative readership even placed former Secretary of State Kemi Badenoch in the lead, who appeals to some Tories for her “anti-woke” side and her less jargon-like remarks than most of its rivals.

After months of scandals and lies under Boris Johnson, issues of integrity have once again been widely discussed. No candidate has said he is willing to appoint the soon-to-be ex-Prime Minister to his government. In the previous debate on Friday, only Tom Tugendhat gave a firm “no” answer when asked if the resigning prime minister was being honest. Kemi Badenoch had contented herself with a “sometimes” and the other three had mumbled vague answers.

At the end of the face-to-face, the candidates had to position themselves on environmental issues. But the subject, relegated to the background of the debates since the start of the campaign, was again eclipsed in a few minutes.

Read also the editorial: Resignation of Boris Johnson: the fall of “Mr Brexit”

If all the candidates except Kemi Badenoch say they will maintain the national objective of carbon neutrality by 2050, they are not making it a priority. With temperatures above 40 degrees expected in England at the start of the week, COP26 President and Minister Alok Sharma on Sunday called on candidates to “take climate issues very seriously”, not ruling out leaving his post. if this was not the case.

In order to select the new Prime Minister, Tory MPs will vote again on Monday, Tuesday and Wednesday, to eliminate the candidates one by one while a third debate will take place on Sky News on Wednesday. Once the cast of the final face-off has been determined, the choice will fall to members of the Conservative party who will vote by mail during the summer. The result of the vote is expected on September 5.