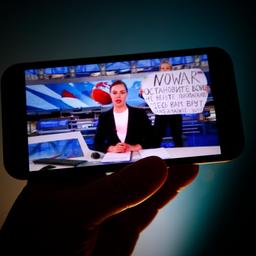 The Russian TV journalist who protested the war in Ukraine during a live news broadcast on Russian state television in March has been arrested. “There is no information about where she is,” her lawyer told Telegram.

The journalist, Marina Ovsyannikova, was admired worldwide in March for interrupting a news broadcast of the main Russian state broadcaster by walking into the studio screaming “Stop the war”. “Don’t believe the propaganda, they’re lying to you” read a protest sign that she could display behind the newscaster for a few seconds.

With her action she wanted to show the world that “Russians are against the war”. At the same time, she wanted to make it clear to her compatriots that they should “think critically and critically analyze the information presented to them”.

After her protest, Ovsyannikova was imprisoned and interrogated for 14 hours. She was fined 30,000 rubles (almost 260 euros) and was then released. She was sentenced to 15 years in prison for spreading “false information”.

A few days later, she resigned from the state broadcaster she worked for. France offered her political asylum, but she refused. She wanted to stay in Russia.