Ligue 1: PSG formalizes the arrival of Rémois Hugo Ekitike for a one-year loan with option to buy 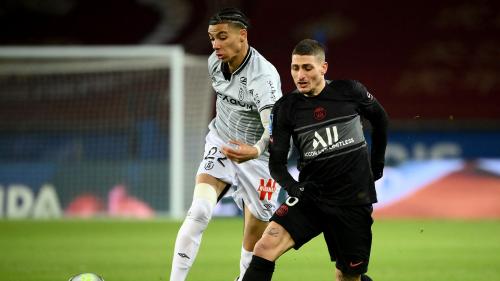 It was only a matter of time, it’s now official. After the definitive transfer of Nuno Mendes and the arrival of Vitinha, Paris Saint-Germain has its third summer recruit in the person of Hugo Ekitike. The French striker arrives in the capital on a one-year loan with an option to buy, the only real surprise of the announcement on Saturday July 16. At 20, the U20 international arrives to complete the offensive rotation of the French champion club, just a few months after having exploded in Ligue 1 with his training club, Stade de Reims.

Paris Saint-Germain is pleased to announce the arrival of Hugo Ekitiké from Stade de Reims. ✍️

The French striker is on loan, with an option to buy, until the end of the season. #WelcomeHugo

After the permanent transfer of Nuno Mendes in defense, and the arrival of another Portuguese, Vitinha (ex FC Porto) in the midfield, PSG is strengthening its offensive line this time. And continues its youth cure. With the center-forward who has just celebrated his 20th candle, Paris is betting on the future as much as the present. Ekitike should play a back-up role at the forefront of the attack, while the Argentinian Mauro Icardi is on the start after a failed 2021-2022 exercise.

The Rémois pure juice, born in the Champagne city, had been the subject of an ardent court for several months in Europe. Close for a time to joining Newcastle and its financial strike force, the striker had become the priority of the Parisian leaders in recent days, notably eclipsing the track leading to the Italian international Gianluca Scamacca.

A tall striker (1.89m), Ekitiké has established himself in recent months as one of the main French hopes for his position. The neo-Parisian revealed himself last season by scoring his first ten goals (in 24 days) among professionals. Fast, already very effective in front of goal, agile in his movements, he could be a good complement to PSG stars, Kylian Mbappé, Lionel Messi and Neymar. “I am a player who really likes fine gestures, explained the player to the official website of his new formation. So my goal is to give pleasure to the people who come to watch the matches. It’s my way of seeing things. I like the aesthetics in football, and I think that in Paris I’m in the best place to play like that.”

“It’s the choice of the heart, he continued. I’m French too, it’s the club of my homeland, of my country. And then it’s a club where the greatest players evolve, where he there is a quality and experienced staff, the desire to win all the titles in all the competitions. There is everything here for me to progress.”

If Ekitiké arrives initially as part of a loan, there is no doubt that his signature is a long-term one. It also allows its training club, Reims, to ensure its financial sustainability in the medium term, as its president Jean-Pierre Caillot explained on Friday. to the local newspaper L’Union. “We haven’t quite reached the sum offered by Newcastle (35 + 6 million bonuses were mentioned, editor’s note) but Hugo Ékitiké has always been respectful towards the club. We are happy to allow him to fulfill his dream. ” This accounting trick of the loan with option to buy, as PSG recently used it for Kylian Mbappé, Mauro Icardi, Danilo Pereira or Nuno Mendes, allows the training of new coach Christophe Galtier to smooth out its expenses to strengthen. And aim once again for the heights in France, as in the Champions League.