This Saturday, the tropical storm “Estelle” will move south of the coasts of Colima and Michoacán; its cloud bands, in interaction with a low pressure channel over western and central Mexico, will cause intense punctual rains in regions of Colima, Guerrero, Jalisco, Michoacán and Nayaritreported the National Meteorological Service (SMN).

SMN pointed out that early today, “Estelle” was located approximately 500 kilometers (km) southwest of Acapulco, Guerrero, and 615 km south-southeast of Manzanillo, Colima, with maximum sustained winds of 95 km/h, gusts of 110 km/h and displacement towards the northwest at 17 km/h. According to forecast models, “Estelle” will follow a trajectory parallel to the Mexican Pacific, so it remains under surveillance.

Likewise, very heavy rains (from 50 to 75 mm) are forecast in areas of the State of Mexico, Guanajuato, Oaxaca, Sinaloa and Sonora; strong (from 25 to 50 mm) in areas of Chiapas, Mexico City, Durango, Morelos, Puebla, Veracruz and Zacatecas; intervals of showers (from 5 to 25 mm) in Aguascalientes, Campeche, Chihuahua, Coahuila, Hidalgo, Querétaro, Nuevo León, San Luis Potosí, Tabasco, Tamaulipas and Tlaxcala, as well as isolated rains (from 0.1 to 5.0 mm) in Baja California , Baja California Sur, Quintana Roo and Yucatan.

He specified that rainfall, which will be with electrical discharges, strong winds and hail, could generate landslides, increase in the levels of rivers and streams, overflows and floods in low-lying areas, for which the population is urged to heed the warnings of the National Meteorological Service, the National Water Commission, and follow the indications of the state and municipal Civil Protection authorities. Maritime navigation in the vicinity of the system is called to take extreme precautions due to conditions of strong winds and high waves.

Likewise, wind with gusts of 60 to 70 km / h is expected in Coahuila, Nuevo León, Sonora and Tamaulipas, and gusts of 50 to 60 km / h in Chihuahua, San Luis Potosí and Zacatecas.

The conditions described will be generated by the Mexican monsoon established over the northwest of the national territory, low pressure channels extended in different regions of the country and the entry of humidity from the Gulf of Mexico and the Caribbean Sea..

During the morning, minimum temperatures of 0 to 5 degrees Celsius are expected in high areas of Chihuahua, Durango, State of Mexico, Hidalgo, Oaxaca, Puebla, Tlaxcala and Veracruz.

On the other hand, the hot to very hot afternoon environment will continue over entities in the northwest, north and northeast, with temperatures above 45 °C in areas of Baja California (northeast) and Sonora (northwest). 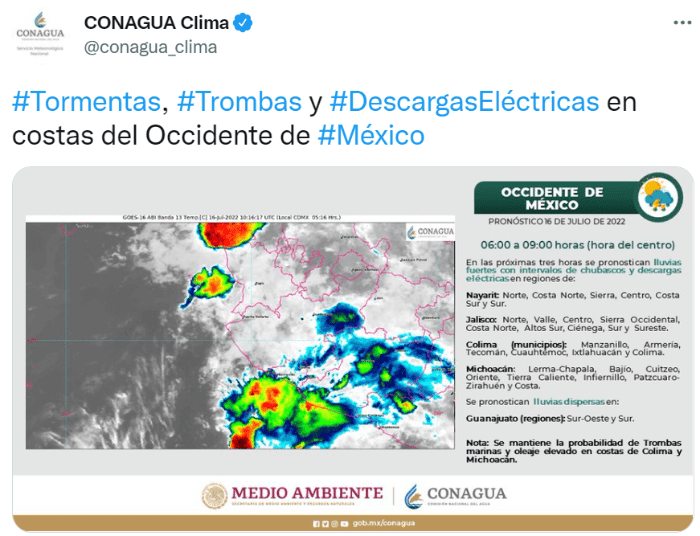 The agency recommended that the population take preventive measures. such as avoiding prolonged exposure to solar radiation, hydrating properly, paying special attention to the chronically ill, children and the elderly, as well as following the indications of the authorities of the Health and Civil Protection sectors.