Barcelona and the revolution of “the levers”: the great team that is about to be formed thanks to the sale of TV rights

Ter Stegen; Azpilicueta, Christiansen, Koundé, Marcos Alonso; Bernardo Silva, Kessie, Pedri; Raphinha, Lewandowski and Ansu Fati. If someone were to recite this line-up in these hours, it would hardly be a recognizable team and yet it could be Barcelona’s for the 2022/23 season if the planets align and if the club manages to close some of the transfers that are going on this coming week chasing with an ant job that is succeeding.

For now, the president of Barcelona, ​​Joan Laporta, already presented the previous week the two reinforcements that he had closed since the end of the 2021/22 season and that he had not been able to make official due to the red that the deficit showed and that the strong economic control that makes Javier Tebas’ Professional Football League (LFP) of the clubs.

These are Senegalese midfielder Franck Kessie, who has just won the Scudetto with Milan, and Chelsea’s Danish central marker, Andreas Christensen, who was champion of the Champions League in 2021. Both arrived at zero cost, because they did in free condition.

In any case, what seemed like a sale of smoke from a summer in which the “culé” fan needs hope after three fateful seasons for the Catalans with just one title, the Copa del Rey 2020/21, with a parade of possible contracts with empty coffers, little by little became a reality for a fundamental reason, which the Barça leaders described as “levers”, tools to obtain funds that allow bringing class players to change the axis of recent times.

These “levers”, a word that became fashionable in the Spanish football summer, consisted of resources based on the sale of 49.9 percent of one of the club’s companies, “BLM” (Barça, Licensing & Marketing), and fundamentally , the sale of television rights, supported by 84 percent of the members attending that Assembly, with a maximum limit of 25 years of usufruct, calculating each ten-year installment at 200 million euros. In this way, the leadership of Barcelona thought of obtaining 500 million euros in this way, something that was achieved in a few weeks, first selling ten percent and now another fifteen to the “Sixthy Street” consortium.

But that is not all. As the percentage of “BLM” could not yet be sold, something not so easy because although there are offers, the club began to realize that giving almost half of the resources from the sale of shirts such as those of Alexia Putellas, Pedri or the already presented Raphinha, may be too much and now he wants to change certain conditions of the contract.

For this reason, although with pain, Laporta and even coach Xavi Hernández are trying to convince one of their figures from last season, Dutch midfielder Frenkie De Jong, that although they consider him one of the best in the world in his position, it is better that he emigrate to Manchester United, whose coach, also Dutch Erik Ten Hag, already had him in the great Ajax that thrashed Real Madrid 1-4 at the Santiago Bernabeu in the 2018/19 Champions League and who dazzled with his game .

It is not that Barcelona wants to get rid of De Jong, who hesitates because he feels comfortable in Barcelona and in the city and, furthermore, he is not convinced to go to a club that is not going to play the Champions League this season, but they are making it understood that with a pass like his valued at 85 million euros, and perhaps with variables, it could reach 90, added to what is produced by the “levers”, the economy would definitely be on track and now yes, it could be brought to a series of top-level players, in addition to the fact that, behind the scenes, Xavi believes that although the Dutchman has great technique, his game does not exactly respond to the so-called “Barça DNA”, and on the other hand it is believed that the Manchester City’s Portuguese midfielder Bernardo Silva, who has already publicly declared his love for the Catalan club and appears in photos as a child wearing the Barça shirt, for more than days, at a press conference, his coach, Josep Guardiola, stated that his team is “Bernardo and ten more ”and already his agent, Jorge Mendes, opened the doors to his arrival at a dinner with Laporta.

The other source of income, although substantially less, is that of a number of players, who will not be taken into account by Xavi, and who will be transferred or loaned depending on the case, such as the Frenchman Clément Lenglet, who left for the entire season Tottenham Hotspur, or Samuel Umtiti, who negotiates with Rennes, or Riqui Puig, with various suitors, including Fiorentina, or the Brazilian Neto, the second goalkeeper on the squad, who was given an ultimatum to find a team interested in forty-eight hours, because Xavi has the German Marc Ter Stegen, Iñaki Peña and Arnau Tenas, from the quarry. Nor are Oscar Mingueza, the Bosnian Miralem Pjanic and the Danish Martin Braithwaite taken into account. 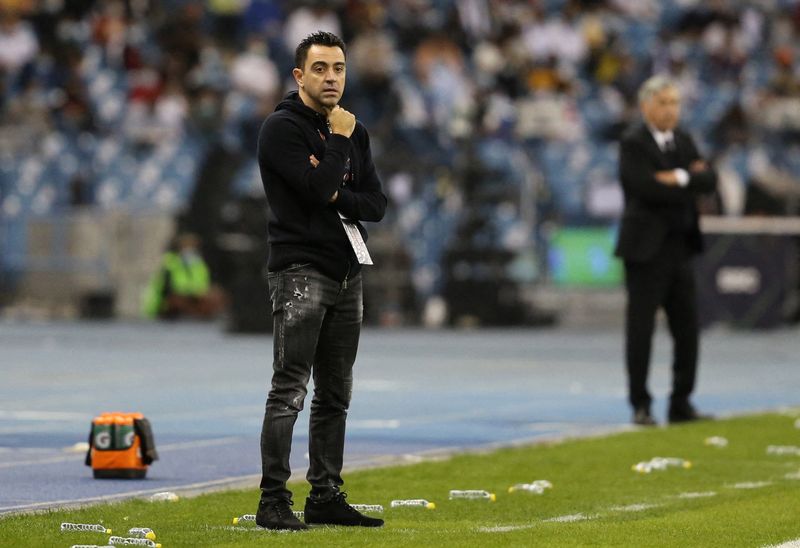 Instead, the case of the Dutch Memphis Depay is different. It seemed that he could stay to fight for a place in the team because Xavi was satisfied with his performances in his first season with Barça, but the return of Frenchman Ousmane Dembélé, who signed a two-year contract when it already seemed that he was leaving as a free agent, and now the official pass of the Brazilian right winger Raphinha, from Leeds United, no longer leaves him room to continue and as is logical, the scorer wants to have continuity to reach the World Cup in Qatar in good shape. Chelsea appears as a great option and even more so when Barcelona wants two Spanish “blues” players to strengthen its defense: César Azpilicueta, former captain of the Londoners, who has an automatic renewal clause but can request the “transfer request”, and Marcos Alonso, with an easier exit because there, the German coach Thomas Tuchel has Reece James. All this could help the negotiations, added to Laporta’s clever idea of ​​inviting the leaders who bought the former club from Román Abramovich to meet in person at a dinner that softened the hearts of the English.

Other somersaults of fate were helping Barcelona in some passes such as the possible one from Sevilla’s central marker, Jules Koundé, considered fundamental by Xavi, due to his youth (23 years old) and technique. The Frenchman was wanted by Chelsea, who could pay much more than Barcelona for his pass, but when he found out that the Senegalese Khalidou Koulibaly expressed his desire to leave Napoli but that he did not want to continue in the Italian Serie A despite the interest from Juventus, he went and closed it for 40 million euros and in this way, he released Koundé.

Even so, the great soap opera of the summer is, without a doubt, that of the transfer of the Polish striker from Bayern Munich, Robert Lewandowski, who will be released on June 30 and who is about to turn 34 in August, almost forcing the Germans to want to sell their pass now before nothing enters the box from next season. Barcelona considers that due to his age and due to the fact that he is free in a few months, his pass cannot be worth more than 40 million, but the pride of the Bavarians – who came to discredit Barcelona by stating that it is a bankrupt club and even a leader maintained that “it may disappear” in the coming years – made them stand firm without letting the striker leave, who already has his contract with the Catalan club for two seasons.

The delay in releasing Lewandowski by the Bayern leadership, to the point that from July 12 he had to return to pre-season training when he asked please not to come to that, seems to come to an end in the next few days, when Barcelona will already have the money from the two “levers” and has already made an offer of up to 50 million (which includes variables) and that would already bring the parties much closer and even in circles close to the German club the pass is taken for granted .

If we add to the hiring of one of the youngsters with the most future and from Racing de Santander, Pablo Torre, the return of Pedri and Ansu Fati from their injuries, plus the base of the rest of the squad with players like Sergio Busquets, Jordi Alba, Pierre-Eerick Aubameyang, Gerard Piqué, Ronald Araujo or Eric García, this Barcelona seems almost a product of a miracle. Now he will have to prove on the field of play, if he can translate it into the game.