Advice for Four Days Marches runners: Get used to the heat in the coming days | NOW 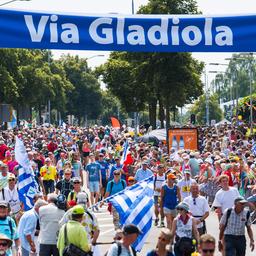 Participants in the Nijmegen Four Days Marches next week would do well to expose themselves to the heat in the coming days. This allows the body to get used to high outside temperatures, says exercise physiologist Maria Hopman of Radboudumc in Nijmegen on Friday.

Walkers must also continue to eat and drink well to prevent them from showing up at the start on Tuesday with mild dehydration symptoms.

If you suffer from headaches or blurred vision while walking, you should seek out the coolness.

The KNMI reports that it can be 36 degrees on Tuesday on the first day of the Four Days Marches. Weeronline even predicts 38 degrees for the Nijmegen region. It will also remain around or above 30 degrees on Monday, Wednesday and Thursday.

Hopman has been associated with the Four Days Marches for years and conducts health surveys among the walkers every year. She is part of the team that decides on Sunday afternoon whether heat measures will be taken during the walking event.

“We know from previous research that the body temperature of Four Days Marches runners rises to 38 or 39 degrees as a result of the effort. That is very acceptable. But if we perhaps go well over 30 degrees, it will be viewed in a new light.” she says.

Muscles produce a lot of heat, says Hopman. Only 10 percent of that heat is used when walking. The body also wants to get rid of the rest of the heat.

It is therefore important whether there is also wind in high heat and how high the humidity is. The Four Days Marches has its own weather service, which calculates the forecast on the course.

The walking legion will enter the Betuwe on Tuesday. For several years now, hikers have been crossing the shadowless dyke along the Waal in the morning. Many runners became unwell there in 2006. Two hikers later died.

The Red Cross is waiting for the decision of the Four Days Marches organization about possible heat interventions before taking special measures, a spokesman said. “We have given our volunteers instructions about heat phenomena in runners and there are many water stations along the way.”