Cannes, the first town in the Mediterranean to be labeled “surf town” 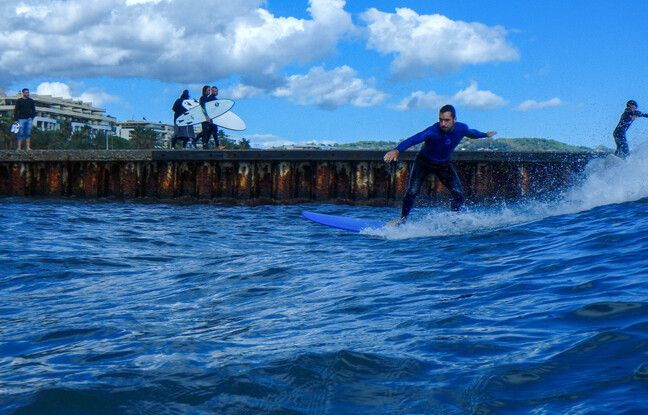 Even though for years surfers in the Mediterranean have been fighting against the clichés conveyed by the film Brice de Nice, Cannes has just been labeled by the French Surfing Federation (FFS) as a “surfing city”. For Olivier, used to the waves of the Côte d’Azur, “this is great news”. “A lot of people who don’t surf don’t understand or laugh, but when you practice here it makes sense,” he continues. According to him, the activity is still starting but it risks “to develop even more with the rise of longboards for the smallest waves”.

Because there are waves. The city even claims to have “several remarkable sites sought after by practitioners from the Alpes-Maritimes, neighboring departments and even from all over France, including the Batéguier wave, west of Île Sainte-Marguerite. Also very well known, that of Pointe Croisette, towards Palm Beach or beach number 17, in front of the Thalès Alenia Space building. The FFS confirms: “It’s surfing in the Mediterranean, it’s not a legend and the spots are of high quality. Perhaps with fewer frequencies and fewer big waves than in the Atlantic, but it does exist. »

“Very important to be the first”

Besides, you don’t need to have giant waves like in Nazaré to obtain the label. Since 2015 and the start of this recognition, the FFS has awarded it in committee when a city submits its application. “It must meet above all two criteria,” she specifies. The first obligation is to have at least one club affiliated with the FFS, which is the case with Cannes Jeunesse. Then, it is necessary that the municipality participates in the development of the practice of surfing and its associated disciplines, including Stand Up Paddle, which is more part of the landscape on the Côte d’Azur, and ensures a favorable reception and environment. for locals and tourists alike.

Among the fourteen municipalities in France with the label, Cannes is the first “surf town” in the Mediterranean, but also the only one to have applied. It is “symbolic” but also “very important to be the first”, according to the FFS which concedes that in Marseille, Martigues or even towards Perpignan, very good spots are also remarkable.

Creation of a surf school

In town hall, we are delighted with this “direct concretization of the policy for the practice of sport in free access and as a way of life”, in particular implemented via the program “Cannes, capital of outdoor sport” launched in 2016 and now “on the high seas” via the extension to nautical activities for several years.

“Sporting activity is, along with culture, one of the two pillars of individual development. It is also a vector of social and intergenerational cohesion. Its educational function through the learning of rules, its ability to create positive dynamics, its propensity to promote the health and well-being of all are major assets”, thus reacted the city.

By being labeled, it will, among other things, “respond to a problem common to coastal cities and thus develop, while respecting and preserving the environment, the coast by organizing in an optimal way the different spaces necessary to accommodate the activities as well as users “. But also, “to place surfing at the center of the tourist assets of the coast, and to ensure the quality of teaching and the services offered”.

For the time being, no surf school exists in Cannes. The community ensures that it will enhance the label obtained to allow “the reception of one or more schools and help support project leaders on these activities [en pleine mer] “. The federation commission for labels meets every two years to confirm whether or not the awarding of this title.