Belarus remains a threat to Ukraine: ‘Do not spare Lukashenko’ 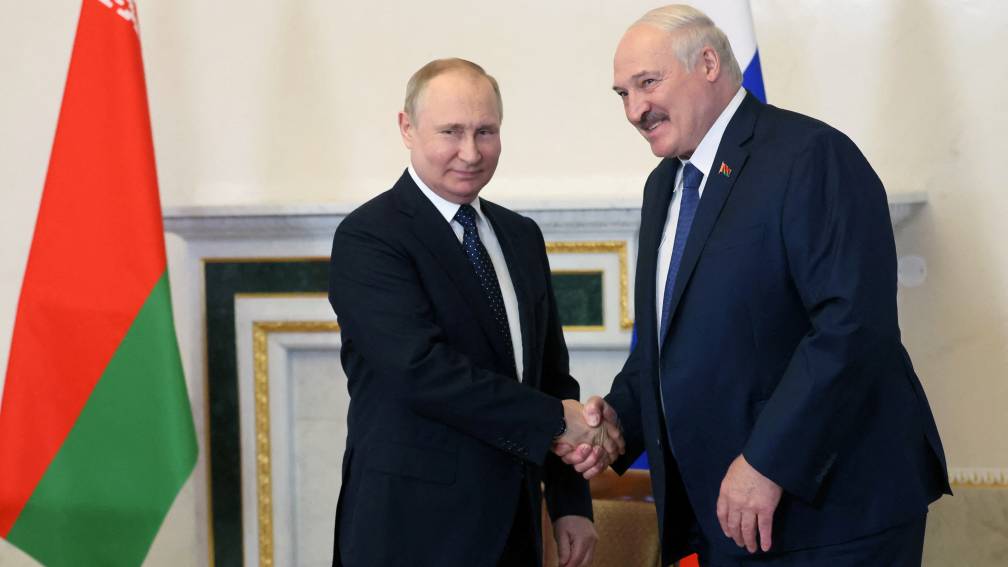 Military exercises are being held this week in southeastern Belarus near the Ukrainian border. The moves are being closely watched by Ukraine, as Chernihiv and the capital Kiev were previously attacked from its Russian-loyal neighbor. Two weeks ago rockets were fired at Ukraine from Belarus.

The precise role of Belarus in the Russian invasion of Ukraine remains obscure. Dictator Lukashenko supports Russia, but seems to want to keep his own army out of the conflict. Well hint he regularly refers to direct conflict between Belarus and Ukraine, because the government in Kiev and NATO pose a threat to his country.

“That is of course a big lie,” said opposition politician and former minister Pavel Latushka, who has fled to the Polish capital Warsaw. “He claims that Ukraine is out on Belarus territory. He also says that about Poland and Lithuania.” Parts of present-day Belarus used to belong to the old Polish and Lithuanian empires, but the countries have no interest in ‘taking back’ those areas.

Lukashenko claims Ukraine tried to bomb military bases in Belarus two weeks ago, but the missiles were intercepted. No evidence of such an attack was provided. “In the meantime, he wants to deploy missiles himself along the borders,” said Latushka.

The Ukrainian intelligence service GOR says Russian troops want to conduct so-called false flag operations in Belarus. Attacks or attacks in Belarus are allegedly carried out by Ukraine in order to involve Belarus in the war. According to the GUR, there are plans to blow up an apartment complex in Mazyr, north of Kiev, similar to attacks on Russian flats in 1999, during the Chechen wars.

Latushka also says it has received signals from sources in Belarus’ security apparatus that indicate such false flag plans. “For example, there is a plan to stage an attack on Belarus at the Polish border, to show that Belarus – and Russia – is attacked by the entire West.” Latushka cannot further elaborate on his sources.

The mayor of the western Ukrainian city of Lviv takes seriously with the scenario of an attack on its region from Belarus. This could cut off Western arms supplies to Ukraine, says Illia Ponomarenko, defense journalist at The Kyiv Independent.

Despite all the threat, both intelligence services and analysts do not assume that Belarus actually wants and will become involved in Ukraine with boots on the ground. There are not enough soldiers available for that: about seven battalions would be lined up on the border with Ukraine. “In addition, Lukashenko will be reluctant because a military intervention in Ukraine is very unpopular in Belarus,” said Bob Deen, Eastern Europe expert at the Clingendael Institute.

Opposition politician Latushka agrees. “There will be mass protests and soldiers will refuse to fight. They are making the decision: either I have myself slaughtered in Ukraine or risk my life in Belarus by refusing to order.” That will herald Lukashenko’s downfall, Latushka predicts.

The main purpose of the military threat is deterrence, writes the American think tank ISW. It forces the Ukrainians to keep equipment and men in the northwest, far away from the actual front in the southeast. Recent Russian arms supplies to Belarus can also be seen in that light. For example, the country will receive Iskander missile systems, with which, in theory, nuclear weapons can be fired.

Even without ‘own’ military involvement, Lukashenko bears responsibility for the war in Ukraine, Latushka emphasizes. “We don’t talk enough about his involvement. He let Russia use Belarus’ territory and infrastructure to kill Ukrainians.” That should not go unpunished, according to the politician in exile. He has therefore started the #PunishPutinsPuppet campaign: ‘punish Putin’s hand puppet’.

Latushka fears that a next sanctions package from the West will spare Belarus, for example to enable grain exports from Ukraine to the EU via Belarus. “That must not happen, because then Lukashenko will become the biggest smuggler of the century.”