“Pair of cynics”: Javier Lozano launched himself against Gutiérrez Luna and Rocío Nahle for spectacular in Veracruz 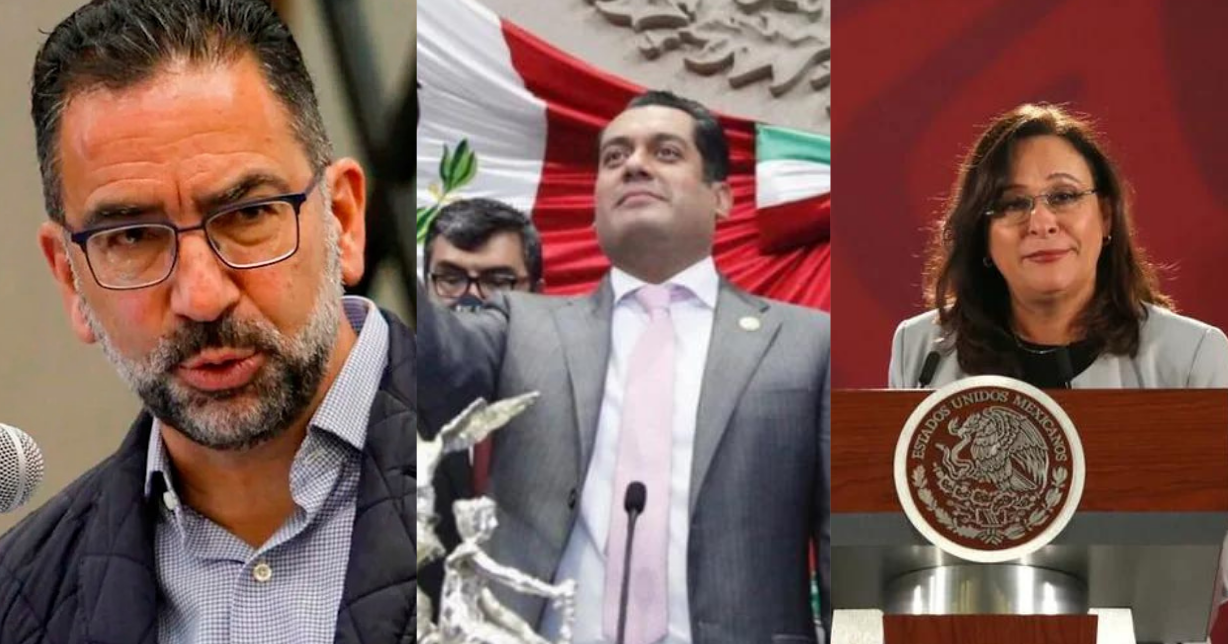 The PAN has become a fervent critic of the 4 T (Photo: Twitter/@Segeluna_S/Cuartoscuro)

The former head of the Ministry of Labor and Social Welfare (STPS), Javier Lozano Alarcón, launched himself against the president of the Board of Directors of the Chamber of Deputies, Sergio Gutiérrez Luna, and the head of the Ministry of Energy (Sener), Rocío Nahle García, after complaints on social networks against the militants of the National Regeneration Movement (Morena).

Through his social networks, the member of the National Action Party (PAN) called the officials “a couple of cynics and useless” in their alleged attempts to consolidate themselves as presumable candidates for the governorship of Veracruz, after the appearance of spectacular promoting the morenistas.

Likewise, he pointed out that the achievements that are presumed in the publicity about the Olmec Refinery Two Mouths It is a “hesitation”, since it is made with money from citizens, which is why it swept the National Electoral Institute (INE) upon sensing that it is about anticipated campaign acts and warned that they will continue denouncing.

“Pair of cynical and useless candidates to govern Veracruz @Sergeluna_S, @rocionahle. And look, the beast that you have now is in the same category. I only clarify that the hesitation of #DosBocas we pay with our taxes. @INEMexico #YSeguiremosDenunciando”, he wrote this July 10. 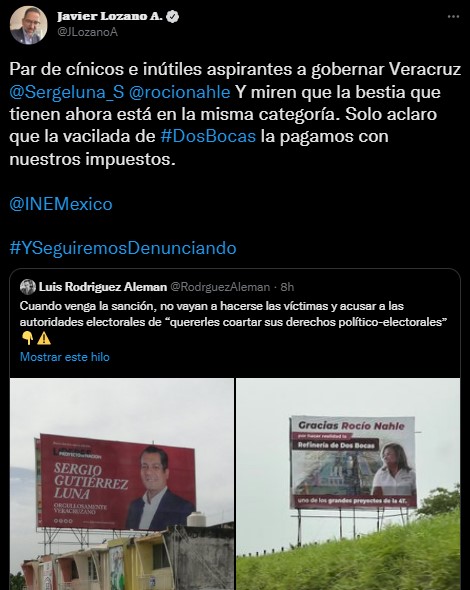 The words of the PAN were in response to the complaints that began to appear on social networks against officials, in which two photographs of two billboards that are currently in the vicinity of the Veracruz entity could be seen.

“When the sanction comes, they are not going to play the victims and accuse the electoral authorities of ‘wanting to restrict their political-electoral rights’”

In the first, it was possible to see that of the morenista deputy who named himself as one of the “leaders of the nation’s projects”, that is, of the Fourth Transformation headed by President Andrés Manuel López Obrador (AMLO); in addition to branding himself as a “proud Veracruzano”.

Meanwhile, the following image showed a message that the citizens presumably would have made for the energy secretary in order to thank her for the inauguration of the Dos Bocas refinery, which they classified as “one of the great projects of the 4T” . 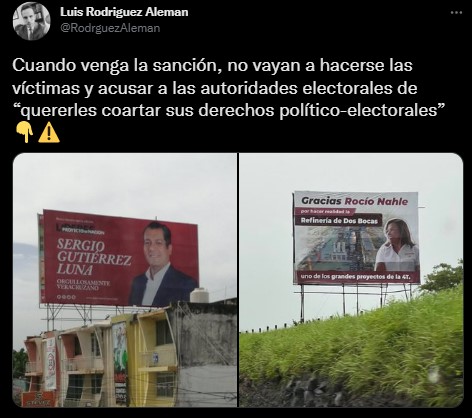 However, it was not the only criticism launched by Lozano Alarcón, as he attacked President López Obrador, after the death of former PRI president Luis Echeverría Álvarez on July 8.

After the death of the politician who was in power from 1970 to 1976, the PAN member sarcastically expressed his condolences to the chief executive, assuring that the Tabasco president continues with “the legacy” of Luis Echeverría.

“My condolences to AMLO. Echeverría’s departure must be hard for him. But go that follows the legacy of him. Pair of wretches”

The comment was published on his Twitter account accompanied by another publication that reads “López Obrador’s ideologue died” and a photo of the front page of a newspaper dated January 1970 in which a photo of Echeverría can be seen. accompanied by the headline: “Luis Echeverría… Will he be the messiah?”

And it is that the politician’s death divided Mexican political opinion, since while some figures in that field have expressed their condolences, others have dedicated words to him that recall his term of office as one of the most repressive in the history of Mexico.

“Canteen no, school yes”: AMLO said to follow the example of the best presidents and announced a new university in Chiapas Retention of Alito Moreno was requested by Campeche authorities: INMCoronavirus in Mexico as of July 10: 5 municipalities of Edomex and 2 mayors of CDMX with more than 70% hospital saturation