Sri Lanka: the only way out is “a government of national unity”, says a specialist 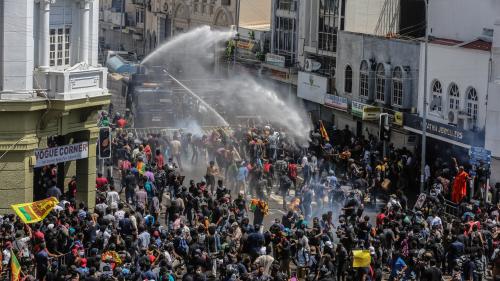 Sri Lanka, whose president fled on Saturday July 9, his Colombo palace stormed and then set on fire by hundreds of demonstrators, has been rocked by protests and violent clashes for three months, against a backdrop of serious economic crisis. The only way out is the withdrawal of the clan currently in power and “the formation of a government of national unity”, according to Eric Paul Meyer, historian specializing in Sri Lanka, on franceinfo.

>> Demonstrations in Sri Lanka: we explain to you why the president had to flee his palace

The country has already experienced crises but “the mobilization of crowds on this scale is a first”, notes Eric Paul Meyer. The popular revolt is linked to “very serious shortages, especially of gasoline, and an increase in prices, including rice”, explains the historian.

The situation has worsened with the Covid and the collapse of tourism but “the country’s economy has been very badly managed over the past ten years”, notes Eric Paul Meyer. “After the end of the civil war, which pitted the government against the minority Tamils ​​in 2009, the government multiplied borrowings on the international market to develop infrastructure but also for expenditures that were not at all productive” , says the historian.

“This government has completely neglected the interests of the people.”

As a result, inflation in the country exceeded the 50% mark, the price of food even jumped 60% compared to last year. In addition, the president wanted to make his country the first to have 100% organic agriculture by stopping imports of fertilizers that were not organic, “which led to a fairly dramatic drop in agricultural production”, assures the historian.

Faced with this political crisis, the Prime Minister said he was ready to resign.
The only possibility, according to Eric Paul Meyer, is “a government of national unity which would put the country back on track, but it is possible that the police and the army will remain loyal to the president, with a risk of violence.”