In South Africa, adolescent girls and young women are the first victims of HIV contamination 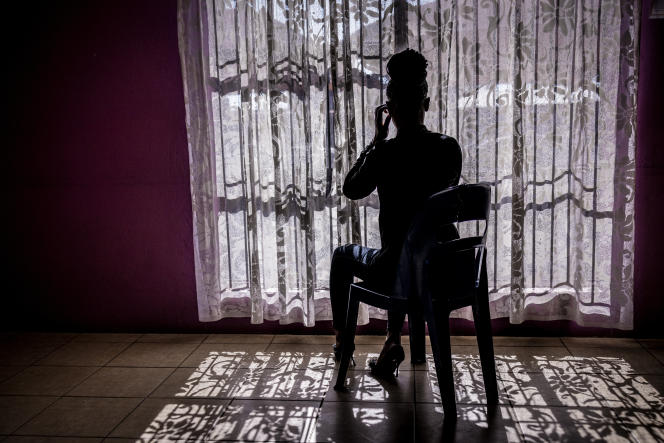 Abigail was madly in love. When she became pregnant, her boyfriend became more and more jealous. He hit her. Abigail stayed. His brother tried to warn him: “This guy sees other girls. She didn’t want to hear anything. Then she caught him with a woman. She forgave. He had a child with another. Abigail never filed charges for the beatings, but she eventually left. “I understood that if it continued, I was going to get sick,” says the 22-year-old young woman.

Shortly after leaving her boyfriend, she pushed the door of Childline, an association supporting adolescents in the township of Soshanguve, north of the South African capital, Pretoria. Abigail took a moment to decide. “I was afraid of being judged, but here, we don’t judge you, because we know that most girls go through the same thing,” she says obviously. South Africa is one of the most violent countries in the world towards women. In 2017, the country had a feminicide rate five times higher than the global average, according to the United Nations.

A year later, Abigail has regained her confidence and is now the one who advises girls in the neighborhood to end toxic relationships. But the young woman knows she was lucky. Months after warning him about the risks of sexually transmitted diseases, his sister confided in him that she was HIV-positive. “That’s when I realized how easy it was to catch him. My sister is a shy person, I wouldn’t have thought this could happen to her. »

The fear of judgment

Like many HIV-positive young people, Abigail’s sister has not told anyone about her status for fear of judgment, too. It is however far from being an isolated case. Each week, more than 1,600 new infections are detected in adolescent girls and young women, or a third of all new infections in South Africa. Between the ages of 15 and 24, they are three times more likely to contract HIV than men of the same age.

Staff members of Childline, an association supporting adolescents, hold a briefing on the goals of the year, in Soshanguve, Pretoria, South Africa, July 1, 2022. GULSHAN KHAN FOR ‘THE WORLD ” Specialized in child protection, Childline’s teams combine HIV prevention with the fight against violence against women. Adolescent girls and young women exposed to violence are most susceptible to contracting the virus. GULSHAN KHAN FOR “THE WORLD”

“Many young women are infected after having suffered sexual violence or some form of coercion. And it is they who suffer the harm, not the attackers who contaminated them, ”analyzes Dr. Nataly Woollett. A psychologist specializing in trauma, she conducted a study on the perception of health services by HIV-positive young people, and currently works with young pregnant women who are victims of violence. “The nurses don’t respect them, the girls are accused of being frivolous, undisciplined, or of having no morals,” she says.

“In the clinics, in general, you are told that you can only blame yourself, because you have had several partners. What did you expect ? Sometimes people snicker when they see the treatment you’ve come for, and within an hour the whole neighborhood knows about it,” Abigail adds. If South Africa is the first center of the HIV epidemic in the world – 7.8 million people live with the virus – the disease remains taboo, and the harshness of the public care system, saturated, hits adolescents even harder than adults.

“Most of the time, boys send their girlfriends to be tested. If it is negative, it means that they are too, ”says Melokhule.

Consequence: in a study published in 2019 in The Lancet HIV magazine, researchers estimate that less than half of young people who test positive for HIV are on anti-retroviral treatment in South Africa. Yet the country has the largest antiretroviral program in the world. Within the general population, 93% of infected people know their status, and three quarters of them are receiving treatment.

Fear of stigma also deters young people from sharing their status with their partners. “When they try to talk, the other often ends the relationship, accusing them of infidelity or blaming them for their past sexual activity,” continues Dr. Nataly Woollett. For their part, several young women tell of the difficulty of getting men to accept condoms: “We have to convince them, they imply that we don’t trust them”, says Melokhule. As for screening, “most of the time, boys send their girlfriends. If it is negative, it means that they too, ”continues the young woman.

Melokhule realized she was in a toxic relationship too thanks to Childline’s No Means No program, which educates young women about abuse. “I understand that some things you think are acceptable are not. When your guy says to you: “Stop drinking, you drink my money” or that he thinks that you belong to him because he gives you money to go out, it is not normal”, she says today today. At 20, after three years of relationship, she left her seven-year-old companion.

Melokuhle, 20, was supported by the Childline association. She ended the toxic relationship that her boyfriend had with her. In Soshanguve, Pretoria (South Africa), July 1, 2022. GULSHAN KHAN FOR “THE WORLD”

“A lot of girls don’t understand that they are in a forced relationship; for them, it is normal. Even in the case of a transactional relationship with an older man. The families accept, because he puts bread on the table. Often, it’s not to buy nail polish or go to the hairdresser, it’s much more dramatic. Everyone knows, but no one says anything, silence marks a form of acceptance,” explains Nataly Woollett, who underlines the impossibility of talking about sex within families.

Long remained on the sidelines of the fight against sexually transmitted diseases, the prevention of violence against women is now at the heart of the fight against HIV in South Africa. Specializing in child protection since the end of the 1990s, Childline is one of the associations on the front line. Since 2019, she has raised awareness or supported more than 13,000 young women, through workshops ranging from professional support to learning self-defense, including budget management and psychological support. In total, Nacosa, the network of associations of which it is a member, hopes to reach 200,000 young people over the next three years.

Summary of our dossier AIDS in Africa: the time of hope

This article is part of a dossier produced as part of a partnership with the Global Fund.