AIDS: in West Africa, the oral self-test, a small revolution that has come to screening 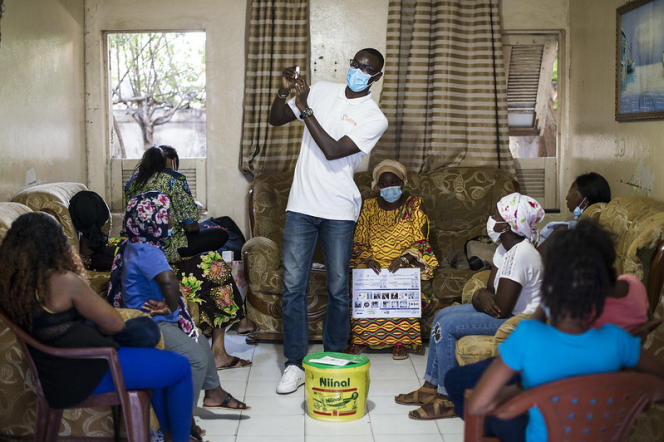 Raising awareness among sex workers in Dakar and demonstration of the use of an HIV oral self-test by the Atlas project team, from Solthis, in 2021. BRUNO DEMEOCQ FOR SOLTHIS

Patients who ignore each other. In Africa, a third of people infected with HIV do not know their HIV status. These are most often vulnerable individuals who are victims of discrimination for their sexual identity or their practices, who thus remain in denial of the risks to which they are exposed: bisexuals and homosexuals, women and men prostitutes, users of injectable drugs.

It is to reach these audiences that escape the traditional campaigns organized by African ministries of health that the NGO Solthis imagined the Atlas self-testing program for West and Central Africa, with the financial support of the Unitaid organization and the French Development Agency (AFD). The project, launched in 2018 in Côte d’Ivoire, Mali and Senegal and which just ended on June 30, consisted of the distribution of 400,000 oral self-tests through peer educators.

“One of the big advantages of self-testing is its confidentiality,” explains Joseph Larmarange, public health demographer and coordinator of research activities for the Atlas project. “Before, I didn’t want to do a test. I was too scared, testify thus Awa Camara, who receives her clients in a room in a red-light district of Bamako, Mali. With the self-test, I took the leap. We do it when we are ready in our head and we are alone with the result. It took me three days to call back the peer educator who helped me when the confirmatory test revealed that I had HIV. Today I am on treatment and I am fine. »

“A Bringer of Good News”

It sometimes takes one to three months for the patients screened by self-test to decide to integrate a course of care, against a day in a health structure, where HIV-positive people are immediately put on antiretroviral treatment (ARV). But, on arrival, only 1% to 3% of them refuse to take a confirmation test.

“Initially, it was not easy to let my testers leave without knowing if the result would not be lost, testifies Amlan Etage, a peer educator from the NGO Arc-en-Ciel + who has been working for ten years to raise awareness among gay circles, prostitutes and drug addicts in Abidjan, Côte d’Ivoire. But in the end, they all contacted me again and I became a real relay right up to the treatment. I can de-dramatize the disease, because it is manageable today. Even when the test is negative, highly exposed people can be persuaded to take preventive treatment (PrEP). With the progress of science, today you are a bearer of good news. Little by little, I was contacted beyond my gay network: I managed to reach women, heterosexuals. This is where I understood that the oral self-test really made a difference in terms of impact. »

“The self-test has become, for prostitutes, a negotiation tool with clients who do not want to use a condom” Clémence Doumenc-Aïdara, director of the Atlas project in West and Central Africa

On the side of prostitutes, self-tests have sometimes become a gift to offer to clients. “A population that is very difficult to reach because many are unaware of the risk they are taking”, explains Clémence Doumenc-Aïdara, director of the Atlas project in West and Central Africa, based in Dakar, in Senegal. “The self-test, she continues, has even become a negotiation tool with those who do not want to use a condom. Sex workers usually manage to convince them to test themselves on the spot and offer them a self-test for their wives. They become real relays of prevention. Awa Camara confirms this: “I offer the self-test to everyone around me. To my clients, but also to my friends. I am no longer afraid to talk about AIDS. »

Because the other huge advantage of the kits is that they are oral and not needle. They are therefore less frightening, painless, simpler to use and considered less aggressive than microblood sampling, with which the transmission of the virus itself remains associated. The result is displayed in a few minutes and their reliability is 93%.

These specificities are a small revolution and make it an essential complement to achieve, by 2030, one of the objectives set by UNAIDS, the United Nations agency which sets the “the” in the fight against the disease: 95% of people living with HIV should know their HIV status, 95% of infected people should be on long-lasting ARV treatment and 95% of people on treatment should have an undetectable viral load – making them non-infectious.

An official guide to self-testing

The results of the Atlas project, “excellent” in Côte d’Ivoire, according to Olivier Geoffroy, local director of Solthis, are up to expectations. The country, convinced upstream, had integrated self-testing into its National Plan to Fight AIDS in 2016. “Working with Ivorian actors has been made easier,” he says. We were able to integrate these results into the official figures for monitoring the epidemic, which is essential to convince donors and ensure that the strategy is pursued over the long term. Finally, together we were able to redesign the official self-screening guide, which is crucial for peer educators. »

Senegal and Mali, which participated in the program on an experimental basis, are in the process of officially integrating it into their response. As for Niger, Mauritania, Guinea and Cameroon, they have asked the NGO for its technical expertise in order to set up campaigns this year.

“The major international donors must seize this complementary tool which has proven its worth, in particular during the confinements where it made it possible to maintain screening while the health structures had closed, argues Clémence Doumenc-Aïdara. The first of the “three 95s” is the essential step out of the HIV pandemic. With the delays of two years of Covid, there is urgency and fear that global health priorities have shifted. »

Summary of our dossier AIDS in Africa: the time of hope

This article is part of a dossier produced as part of a partnership with the Global Fund.