Trackers for Peace of Sinaloa AC, in coordination with the State Commission for the Search of Persons of San Luis Potosí (CEBP), carry out the investigations to locate alive Kevin Fernando Ramírez Gálvez, a young man from Ahome, Sinaloa, who disappeared on April 10, 2020, in the capital of Potosí.

A photograph published months ago on the Disappeared Mexico Facebook page gave them hope of finding the young man in the capital of Potosí, because a homeless man wandering the streets of Jacarandas could be Kevin Fernando.

Coming to San Luis capital to carry out the search took them months of waiting, since through federal resources and paperwork it is how they managed to fly from Sinaloa to the state of Potosí. The group of women, made up of Carina Ramírez Gálvez (Kevin’s mother), Carolina Ramírez Gálvez, Selene Ramírez Gálvez, Yucari Ozuna and Claudia Rosas, who is the leader of the group, began the tours yesterday, Monday, July 4.

In an interview for EL UNIVERSAL San Luis Potosí, before going out on the night search, they talked about the pain of fighting the world to find their missing relatives. This search for Kevin’s life is a light that guides them, that does not let hope die, because for them “hope dies the day I find my son in a clandestine grave.”

Carina Ramírez Gálvez, mother of Kevin Fernando, fainted on April 10, 2020 when she had no further contact with her son. In Sinaloa, the disappearances of people are related to the forces of order or organized crime, given these factors, not hearing from a family member again is devastating.

Kevin Fernando had just finished high school, he was 18 years old when he was last seen in “El Jitzamuri”, a fishing camp in Ahome, Sinaloa. His aunts are fisherwomen, who throw their nets into the open sea to bring sustenance to the house. Selene and Carolina Ramírez Gálvez launch the nets in this ocean of missing persons that is Mexico, with all the strength and love to find Kevin Fernando alive.

Around 8:20 p.m. on Monday, July 4, the Sinaloan trackers, accompanied by the security agencies of Potosí and the CEBP, left the State Center for Forensic Identification and Search in the direction of the Jacarandas neighborhood, an area where they were he has seen wandering and dozing the young man who is supposed to be Kevin.

The mixture of joy and fear is always present, but it gets worse at the start of the tours. Joy because they are very good signs and the resemblance is too much, fear that it is not him, but always with the conviction of returning that person to his family because that is the main reason for being of the search groups.

Hernán Cortés is crossed, Muñoz, flyers. The condominiums are checked, neighbors come out and are alerted when they see the mobilization. They are shown the search files and the photograph published on networks, some say they have seen him, “he picks up plastic bottles”, “he brings a black trench coat”, “sometimes he goes by the places that are in high school”. The women trackers walk the streets in darkness, flooded by the rains of the weekend, they paste flyers, the anxiety of being so close and at the same time so far tires them.

Every street traveled talks about love that search groups work because they work from personal interest. The mothers, sisters, daughters and wives become experts in law, criminalistics, human rights and public function because they work under the motto “I will look for you until the end of the world”.

Kevin Fernando Ramírez Gálvez, who is currently 21 years old, is 1.80 meters tall, has dark skin, medium-sized dark brown eyes, thick eyebrows and a beard. As a particular sign, he did not develop the fourth toe of both feet. Any information or data on his whereabouts can be given to the following telephone numbers 6681443485 and 4445241481. 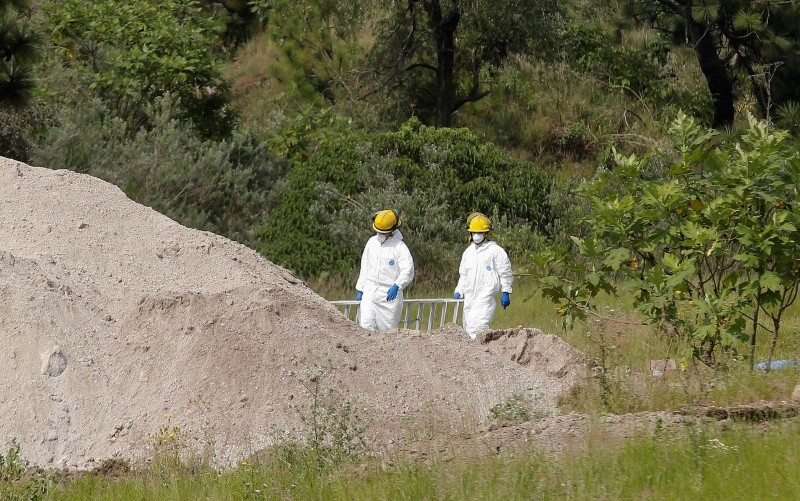 Claudia Rosas, founder of the association, found her son in a clandestine grave. EFE/F. Guasco

The birth of the organization

The Sinaloa Trackers for Peace Association was established on July 14, 2017. Claudia Rosas is the leader of the group, based in the municipality of Los Mochis, and has 20 active families, united, to find their young.

Claudia’s story as a searcher began on April 11, 2013, when her son Javier Fernando disappeared. Her life changed drastically, she recognized that her concerns were trivial, clothes, shoes, walks. Not knowing anything about her son, her life and that of her family turned with the goal of finding him. She started working with five people, all her relatives.

She was instructed, managed with the authorities and learned to be a public official by working hand in hand with the directors of the Los Mochis City Council, until she achieved a municipal search office. The fight that Claudia Rosas embodied, along with her daughters, lasted seven years, with tears rolling down her face she tells how the day was when she was reunited with her son.

It was on March 17, 2020, in the town of Guachapori, when his hope finally died. A man guided her to a clandestine grave, in that piece of desert that is an extermination camp, there in anonymity he told her that when hunting with his friends and following a wounded deer they found the site.

Claudia stayed there, the heat suffocated her, but she was happy to have obtained positive results in that trace of remains, the anonymous man said goodbye to the remains and when he left he mentioned: “I told you that I was going to deliver you into good hands and I think it left you in the best.

She waited for her companions and daughter to arrive, with shovels they began to dig, by shoveling the colored bracelets that Javier Fernando fell at her feet, she had found her son.

Dig up the brother

Javier Fernando’s sister was in charge of removing his remains, the clothes came out, the tennis shoes, if it was him, his mother asked him to stop, to let the experts arrive, but she replied: “Oh, mother, if I have brought out many, why shouldn’t I dig up my brother?” Today that young woman has a degree in Criminalistics.

When asked about the figures of families and people found, Claudia Rosas replied that the figures always hurt and hurt, that for them the son of any partner has the same value… for each person we have found we have found my son.”

He mentions that there is a big mistake when saying that there are groups with 600 families, at most 20 families work with them, that if that were the number, it would be something else when searching in the field. Claudia calls on the authorities not to underestimate the search groups’ struggle, to support them with resources, to inform families that DNA tests are free, and points out the importance of creating municipal offices to search for missing people.

To the families that do not mask the truth about the steps of their children, although it is true that they are boys with bad decisions or friendships, they do not deserve to be disappeared and killed, because by killing them, they also kill them.

This is the first time that Claudia Rosas has carried out a search outside of Los Mochis, she says it is because she has already found her son, now she continues to support the mothers who go out to search. She does it to dignify the struggle based on love and accompaniment, so as not to profit from the image of the disappeared, because she seeks peace and justice for the families.