“LCI does not seek to stir up hatred, fears and passions” 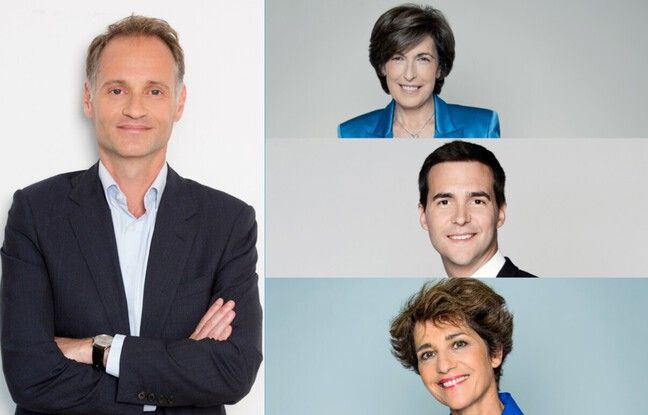 “We are not going to change what has worked, we are going to adapt”, summarizes Fabien Namias, the deputy general manager of LCI who presents, exclusively for 20 Minutes, his back-to-school schedule. The news channel of the TF1 group ends its 2021-2022 season with a smile: it has recorded, in terms of audiences, the best scores since its creation. “The key word is stability, to build loyalty and maintain the relationship of trust. But stability does not mean immobility, there will be novelties on all sections, ”he warns. Let’s go into detail…

With an average audience share of 1.4%, LCI achieved its best season in history. So it is satisfaction that dominates?

Sure ! We are up 0.3% on the previous season. 12% in number of viewers: this is the strongest increase of the four news channels. This is the result of our repositioning and the overhaul of 80% of the grid last year. The most decisive was our mobilization on the conflict in Ukraine and the presidential and legislative elections which enabled LCI to affirm its identity of expertise and analysis. We take the time to understand things, to explain, to put things into perspective. We are the only news channel to go into this area when others favor permanent news or opinion and controversy. LCI increased its viewing time. It is a sign of public confidence and recognition of our positioning.

At the same time, BFMTV is well ahead in terms of news channels, with an average audience share of 3.3% over the season. CNews is at 2.1%. Does LCI have the ambition to catch up with them? Is bridging the gap possible?

There is a desire to progress. That’s what happened. My subject is not to be the first, second, third news channel. Obviously, we always aim to be the best – when we are professionally demanding, that’s what we are looking for. We want to retain an audience and progress without ever giving up on our values. I prefer to be in our place by making a high-quality channel rather than gaining market share at the expense of a requirement, an ethic, a form of honor in journalism. I have no negative judgment to pass on what our competitors are doing. We are all professionals and we all have a responsibility to produce a continuous news channel. What particularly appeared during the season was the difference between these offers and that of LCI, which has invested in the premium, demanding segment.

I’m not talking about the other channels, but of course at LCI we have a responsibility. In a country divided, fractured, mostly uncertain as we know, in such a brutal world, the least we can do, since we have the chance to address millions of people every day, is to offer them content, mechanisms of understanding rather than seeking to stir up hatreds, fears and passions. You never win lastingly by playing on hate or fear. Neither in politics nor in journalism.

In 2019, the CSA called LCI to order for having broadcast live the entire speech of Eric Zemmour at the Convention of the right. This season, you only aired excerpts from the spot announcing Eric Zemmour’s presidential candidacy… Is that an example of the responsibility you’re talking about?

Absolutely. We get to know ourselves and we learn from what we have done well and what we have not done well. The more time passes, the more we defend what people expect of us: above all, do not give in to the race for permanent shallots. On the weekend of April 3 and 4, we broadcast the speeches of all the candidates and we were the only channel able to broadcast them in full, without distinction. We had anticipated, learned to manage speaking time. The goal is not to know who we broadcast or not but what it corresponds to, why we do it and in what approach it fits.

If we talk about the TV transfer window, we already know that Hélène Mannarino is leaving “Les Matins LCI” to succeed Alessandra Sublet at the presentation of “C Canteloup”, on TF1…

With Thierry Thuillier [directeur de l’information du groupe TF1], it seemed to us that being in the evening on a product that likes to make fun of the political world was hardly compatible with a morning show. Hélène Mannarino made this career choice, I take my hat off to her. Alongside Stéphane Etchevy, she has largely contributed to the significant improvement in morning audiences this season.

Stéphane Etchevy, he stays in the morning?

It will be the mainstay of the device. At the start of the school year, it will be Stéphane Etchevy and his team, between 6 a.m. and 9 a.m. There will be new faces: Kady Adoum-Douass will present the newspapers, Margot Haddad will provide an international column, Virginie Leguay will be in charge of a new political post and Ange Noiret will present the weather forecast. The political interview, which is a very strong marker for us, will be conducted by the head of the political department of TF1 and LCI, Adrien Gindre.

Elizabeth Martichoux, who provided this interview until then, switches to the 9 a.m. to noon slice…

It’s the big move of the season. We wanted to build around it an in-depth, top-of-the-range program that won’t yield to buzz, controversy or opinion. It will be divided into two parts. From 9 am to 11 am, it will be a question of digging, with experts, into the major current topics of the day – three maximum. To bring these facts which will be developed, we will welcome Narjisse Hadji, a journalist [venue de BFM Paris] very talented. From 11 a.m. to noon, Paul Larrouturou will be on set, with a report that may lead to the invitation of a personality who will be interviewed by Elizabeth Martichoux. Among the new recruits, we are also very proud to welcome Paola Puerari, who comes from France Inter and regularly collaborates with 28 Minutes d’Arte. She is passionate about corporate issues, she will deliver a ticket every day.

What about “LCI Midi” presented by Claire Fournier and Julien Arnaud?

We keep cutting 12h-15h. The slice is entrusted this year to Christophe Moulin, who worked on the second part of the season, when Julien Arnaud left to do the replacements at 1 p.m. on TF1. It has succeeded in its mission to offer a large home newspaper bringing live news to life. He will co-present the show with Anne Seften, who until then officiated in the evenings and on weekends. Claire Fournier, she returns to her first love by becoming one of the economic editorial writers of the chain. She will be on Elizabeth Martichoux’s show every day.

Bénédicte Le Chatelier is staying on the 3 to 6 p.m. slot?

Yes. Between 5 and 6 p.m., she will wear a political date and will be joined by Ruth Elkrief. Around them, editorialists will come to decipher political news.

The “24h Pujadas” is irremovable?

This is the channel’s signature show. In May, we were the first news channel on this 6 p.m. to 8 p.m. slot. David [Pujadas] is working on novelties with his team. What I can tell you is that we will find his best columnists, Caroline Fourest and his counterpart, Robert Ménard, who will have a ticket on Wednesday.

Robert Ménard, mayor of Béziers, is marked on the far right…

The hallmark of David Pujadas’ programme, which has the expertise and the ability to supervise and control the air, is to give voice to all opinions. Caroline Fourest does not have a political mandate, but we cannot say that she has her tongue in her pocket. Robert Ménard is now an elected official, his speaking time will be counted by the competent authorities. We watch over it. Afterwards, it’s a past, a story, he was a journalist, boss of Reporters Without Borders, he was quite close to the far right, today he is evolving. You have to hear different voices on LCI. As long as they are exercised within the republican framework, they have a say.

If Caroline Fourest is the “counterpart” of Robert Ménard, it is because she is supposed to represent opinions from the left of the chessboard. However, it is not unanimous on the left…

I’m not trying to achieve unanimity, I’m trying to give air to interesting, different people who complement each other. What is the relationship between a Fourest, a Ménard, a [Luc] Ferry, a [Daniel] Cohn-Bendit [ces deux derniers débattent dans En toute franchise] ? On paper, not much. But they have in common great experience, great legitimacy, great intelligence and a great ability to present ideas with clarity. They think differently but enrich the antenna by paths, orientations, different choices. This addition of talents, as long as it is exercised within a republican framework, means that the channel can continue to grow and address everyone without sectarianism.

Last season, Ruth Elkrief embodied the 6 p.m. to 8 p.m. slot with “Ruth Elkrief 2022”, centered on the presidential election. What happens to this meeting?

Julien Arnaud arrives on this niche. From 8 p.m. to 9 p.m., the show will be dedicated to politics. Ruth Elkrief will hold the central role of analysis until 8:30 p.m. Then from 8:30 p.m. to 9 p.m., she will question a major guest, political or otherwise, alone. From 9 p.m. to 10 p.m., we will find Julien for a program entirely dedicated to the international scene. Around him: Pierre Servet, Didier François, Catherine Jentile, Samantha de Bendern, among others… I also announce that Thomas Misrachi, who joined us last year and produced exceptional reports in Ukraine, joins the editorial staff of TF1 as a reporter. It will be found regularly on LCI.

Will the title of the 6 p.m. to 8 p.m. segment always allude to the name of Ruth Elkrief?

It’s obvious. On the first hour, it will be one of the essential links. I don’t believe in hourly increments. We wanted the rhythm to be homogeneous, carried by one of the best presenters there is, Julien Arnaud. We didn’t think we’d do two hours of politics because we already do a lot of it during the day. But since you ask the question, yes, the name of Ruth Elkrief is central.

To tell you the truth, I don’t have the title yet. You put a glue on me.

Are Eric Brunet and Julie Hammett returning for “Brunet & Cie”?

Yes, this pair works wonders. Just yesterday [mardi] evening, we were the first news channel between 10 p.m. and midnight. The audience has more than doubled in one year. It’s a box, the only late info show that exists. We are very attached to this show.

Let’s move on to the weekend grid… Who stays, who leaves?

On Friday, Marie-Aline Méliyi will provide the slot from 3 to 6 p.m. Amélie Carrouër, that of 6-8 p.m. – she was also entrusted with the destinies of the channel for The Grand Jury LCI – RTL of Sunday noon. The 8 pm – midnight will be carried by Darius Rochebin, who has on the edge the success that we know. He will co-present with Alexia Mayer, from TF1.

What about the morning of Anne-Chloé Bottet and Christophe Beaugrand?

Nicolas Domenach leaves the weekday morning to carry the political ticket of the weekend mornings. Then, Damien Givelet remains on the 10am-noon, but we will make a number of changes. It is under consideration. And then, we entrust the 12h-15h of the weekend to Solenn Riou who had joined us for a column in the morning and made wonderful reports in Ukraine. She is courageous and proves that talent does not wait for the number of years. François Langlet, he remains on the grid on Sunday, with a great guest.