A ground of honor with its handrail, a very small wooden and metal stand that is showing its age to accompany it and a half-green, half-yellow rectangle for the lawn… In the end, the Girondins de Bordeaux may have lived this Wednesday evening a size test of what awaits them in a few weeks in National 3 if the club is brought to file for bankruptcy after its administrative demotion in National by the DNCG. In any case, all this did not prevent David Guion’s players from winning their first friendly match of the season against Rodez (2-1) in Agen thanks to two goals from Delaurier-Chaubet and Mwanga in a context of course very heavy. 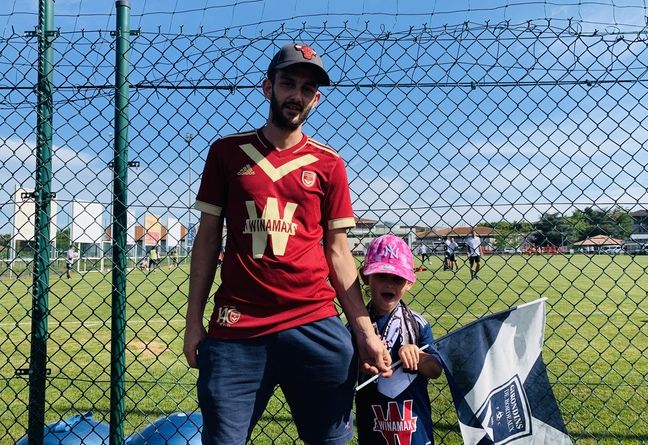 Thomas and his granddaughter attend all the Girondins matches. – Clement Carpentier / 20 Minutes

You should have seen the funeral head of the Bordeaux coach when he arrived at the stadium. He was not the only one to have the mask the day after the decision of the appeal commission of the financial policeman of French football. “I haven’t slept all night”, admits to 20 Minutes one of his staff members a few minutes before kick-off. A little further on Thomas, a club member from Agenais, observes the players warming up: “It’s very hard to live with! It saddens me to see this. We have absolutely no idea where we are going. In addition, we do not really understand what is happening and what we really blame the club.

Many still have this feeling at the club since the management has not yet received notification from the DNCG with the reasons that explain its decision. During the day, before joining Lot-et-Garonne, the professional group received a visit from the general manager, Thomas Jacquemier and the technical director, Admar Lopes. The message from the two men was essentially quite clear: “We continue to follow the pre-season program normally until the end of July”. Basically, pretend nothing has happened until the club has exhausted all possible remedies before the start of the Ligue 2 championship on July 30. Not easy.

⚽️🎙David Guion’s reaction after the victory of the @girondins against Rodez in a friendly match. He returns to the decision of the DNCG and the context around the club. #Bordeaux #Girondins #FCGB pic.twitter.com/ek0lfyKKEq

David Guion, the only one to speak after the meeting, admits all the same that he “did not think he had these concerns [à gérer] and thought that today we would be totally focused on the purely sporting objective. “He continues:” We have hope in our management team, we must trust them. We communicate with her regularly. I can’t let myself be distracted and I want to stay focused on the field and on the athlete. And then, it’s always good to send a message to our environment right now because we all need it, and especially the players who have been working very well since the recovery. »

“Limit, it hurts even more to see the Girondins play again”

The club acts so as if nothing had happened that among these players, there were some new faces. Even if their contract has not yet been approved by the LFP due to the situation of the Girondins, rookies Yoann Barbet and Danylo Ignatenko have played this meeting. Not Vital N’Simba for lack of insurance according to David Guion. “Limit, it hurts even more to see the Girondins play again because we realize that there can be a good little team in Ligue 2, says Nicolas behind the handrail. For example, I find that the young people are at the level. Frankly, it will be a huge, I mean a huge mess if the club disappears and has to go back to National 3.

The Girondins in great danger, the demotion to National confirmed via @20minutesSport https://t.co/JQqsc2WyDX

While waiting to find out more, the Girondins will play their second preparation match on Saturday at 7 p.m. against Trélissac. During this time, the Ultramarines will organize a “survival march” in the streets of Bordeaux in order to play their role of supporters until the end because unfortunately at the moment, the most important matches for the Girondins are not being played. on the green rectangle but behind the scenes.

Cyclists and pedestrians are separated on Laan van Berendrecht | NOW