All Utrecht company roofs must have solar panels | NOW 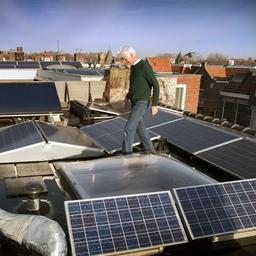 The municipality of Utrecht is launching a plan to triple the energy from solar panels in a short time. The problem on the network has also been considered: the local power supply does not have to find its way through the national cables, according to the alderman.

The transition to sustainable energy is being delayed in the Netherlands because the national electricity network cannot cope. It will take another ten years before the biggest problems are over. But you can bypass the national network, reports the municipality of Utrecht, by handling the flow locally.

On Thursday, Utrecht will launch several pilots with which the municipality wants to generate three times more solar energy by 2030 than in 2020. There are also more and more companies in the Utrecht region that are warming up to solar energy, but there is a hitch. Literally: the cables are not thick enough and the power stations are too small.

For Utrecht, that kink in a trivial meadow is a stone’s throw from the Oudenrijn junction, where the A2 crosses the A12 southwest of Utrecht. Although dozens of transformers, cables and coils do their job perfectly, the capacity of the Oudenrijn high-voltage substation, built in the 1990s, is outdated. As a result, projects that generate large-scale energy can no longer be connected to the power grid since October 2021.

Forcing the problems to make the network smarter

Van Hooijdonk explains: “There is currently no incentive in the system to also use locally generated electricity locally. I often compare it to the road network. Everything goes onto the highway at once. As a result, the electricity network is overcrowded. But you have that highways are not always necessary. For example, the large roofs and the large users are all in the same industrial area.” The municipality wants to link the two, without the power having to go through that highway.

This can also be done within a company itself. “We help a moving company that wants to make its fleet electric. They have a large roof. If you install just enough solar panels to charge the cars, you don’t have to go on that highway.” There will also be pilots with temporary energy storage in batteries and with the ‘solar carport’, a roof with solar panels on a large parking lot, where the electricity does not have to go on the highway.

Joren Harmanny of Groenpand, a company that constructs large and small installations, is increasingly encountering capacity problems: “A large project was withdrawn for the first time about two years ago because of these problems. It was not an issue before that. I think that a dozen or so projects have not gone through.”

He sees something in the local networks: “Technically it is possible. Moreover, the cables are already there and the equipment is there. You just have to use it better. We still have a lot to do for that, but it is possible.”

To really get all the roofs full, the municipality is even working on an obligation for companies. Van Hooijdonk: “The roofs simply have to be filled. People sometimes ask me: “Why do you install solar panels in meadows when so many roofs are unused?” They are right about that. All roofs must be filled. We help companies first, but if If we can’t, we’re going to oblige.” Incidentally, that will take a while, the municipality expects that it will only be legally possible from 2023.

Third strike of the summer for Ryanair cabin crew