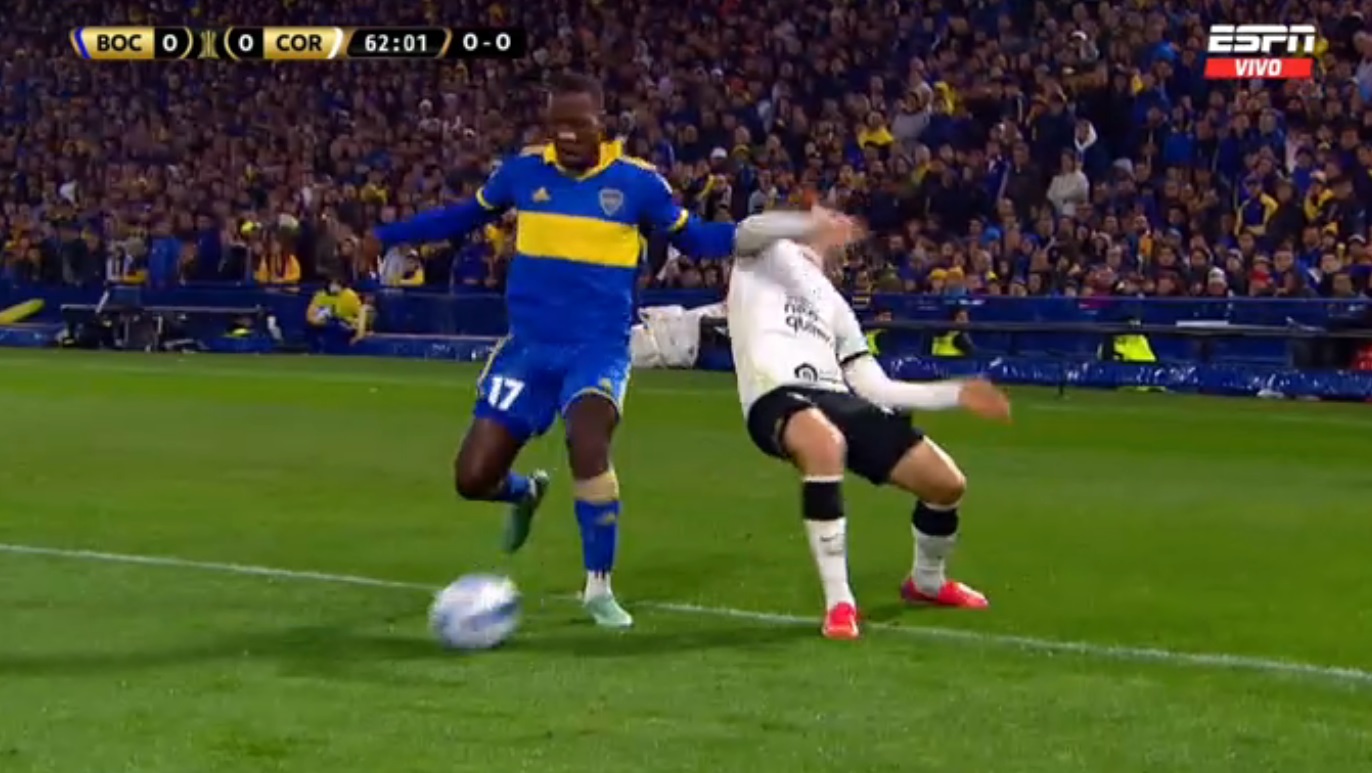 Boca Juniors equals goalless with Corinthians for the round of 16 of the Copa Libertadores 2022. In an attack by the Brazilians, Luis Advíncula went very hard at the closing and put his hand in the face of a rival. The Peruvian was on the verge of committing a penalty, but the referee of the match decided that it was not a foul.

All this happened at 61 minutes of the match. Lane player Lucas Piton tried to overwhelm the left side of the field and ran into Luis Advíncula. ‘Bolt’, in his eagerness to win the position, slapped him in the face and the Brazilian dropped on the edge of the area. The Peruvian kept the ball and came out playing from the bottom.

The ‘xeneize’ winger interpreted that his rival wanted to fake a penalty and approached him to reproach him. “Advíncula that tells Piton everything,” said the ESPN narrator. “He was ahead of him and there is always a risk,” added the commentator.

“They are stopping the play”, warned the rapporteur thinking that the referee was going to consult the VAR for the action of ‘Rayo’. However, after a few seconds of anguish, the referee of the match asked that football continue in the Bombonera.

Luis Advíncula almost commits a foul near the area in Boca Juniors vs Corinthians.

Boca Juniors had a great chance to take the lead in the first half, however they wasted it. Gustavo Pereira elbowed an Argentine player and the judge charged a penalty in favor of the locals. Darío Benedetto was chosen to make the shot effective from twelve steps. The ‘Pipa’ hit the near post hard and collided with the post. He silenced all the fans who were in the sports complex.

If the match remains even, everything will be resolved on penalties. The winner of this key will face the winner of the duel between Flamengo and Deportes Tolima, Raziel García’s team. His rival in the quarterfinals will be revealed this Wednesday in Brazil.

PARTICIPATION OF ADVÍNCULA IN LIBERTADORES

This is Luis Advíncula’s seventh match in this edition of the continent’s top competition. He was in all the commitments of the ‘bosteros’ in the group stage with the exception of the victory on the last date over Deportivo Cali. He always started as a starter.

In the first leg against Corinthians, he had a great performance and was praised by fans and ‘gaucho’ journalists. “I don’t remember a right back as established as Advíncula in Boca’s last years. Maybe someone is escaping me. But the Peruvian thing today in Arena De San Pablo was surgical. It was Willian’s turn to mark and he was only dribbled once. Madness”, can be read on the Twitter of the communicator Teo Coquet.

Boca Juniors will collide with San Lorenzo next Saturday, July 9 at 1:30 (Peruvian time) at the Pedro Bidegain stadium. Sebastián Battaglia’s team comes from losing 3-0 against Banfield, since he put substitute players thinking about the important match with Corinthians.

How are you doing in the standings? The ‘xeneizes’ are in eleventh position with nine points to five behind the leader, Gimnasia y Esgrima de la Plata. Their numbers in this tournament are as follows: 3 losses and 3 wins.