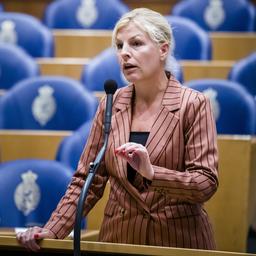 GroenLinks and PvdA are not pleased that the cabinet will not do anything with their plans for additional purchasing power repairs. If the cabinet continues to refuse to act on their proposals, they will not agree to next year’s plans, they warn. This can have major consequences in the Senate where the coalition does not have a majority.

“This is political unwillingness. The cabinet has knowingly not taken any responsibility. I find that reprehensible,” GroenLinks leader Jesse Klaver told NU.nl.

They are also displeased with the PvdA about the lack of additional purchasing power measures. PvdA party chairman Attje Kuiken: “The sun is shining now, but it will soon become colder and the heating will have to be turned on again. People will then literally be left out in the cold with the ever-rising energy prices.”

On Tuesday evening, the House of Representatives will debate with the cabinet about the adjustments to the cabinet plans for this year in the Spring Memorandum. Due to the war in Ukraine and the rising prices, there are more changes than usual.

GroenLinks and PvdA will therefore vote this week against the extra expenditure (the so-called supplementary budget) of the Ministry of Social Affairs, because in their view the department is doing too little to repair purchasing power.

The left-wing parties have a dominant position in the Senate, because the coalition of VVD, D66, CDA and ChristenUnie does not have a majority there. GroenLinks or PvdA can each ensure that majority.

JA21 also has that trump card in the Senate, but the dissatisfaction is at least as great there. A spokesperson said that the party is very disappointed with what is stated in the Spring Memorandum and that in their view little or nothing has been done to improve purchasing power.

Three weeks ago, Klaver and Kuiken submitted proposals during the debate on the Spring Memorandum to freeze rents this year and introduce an extra energy allowance of 500 euros for everyone who receives health care allowance.

Both are not possible, the cabinet announced on Friday. The extra surcharge creates “big problems” because “many citizens (wrongly) are left out”, wrote Minister Sigrid Kaag (Finance). This would subsequently lead to so much extra work at the implementing organizations that civil servants would not have time left for regular work.

The implementation of such an extra surcharge would also be “fairly disastrous”, Prime Minister Mark Rutte said during his weekly press conference on Friday. “Technically very difficult and in implementation very difficult. And that’s where the shoe pinches,” said Rutte.

The debate on the Spring Memorandum has not yet been concluded, because the cabinet was not yet able to provide conclusive answers to the opposition plans. That is why the sequel is on the agenda for tonight.

A selection of the government plans in the Spring Memorandum:

Energy surcharge of 800 euros for vulnerable households Reduction of VAT from 21 percent to 9 percent on energy bill as of 1 July Reduction of excise duties on petrol, diesel and LPG/LNG since 1 April A total of 6.4 billion euros to mitigate rising energy bills Defense spending meets in 2024 and 2025 to the NATO standard Minimum wage and AOW will rise from next year to 7.5 percent in 2025

Kuiken: ‘If the cabinet really wants to, then it’s possible’

The cabinet is already allocating more than 6 billion euros extra for this year to soften the rising energy prices, but Klaver and Kuiken find it incomprehensible that it should stop there.

They both point to the alarming report of the Central Planning Bureau that 1.2 million people may find themselves in financial trouble if energy prices remain high.

“In January I already told the cabinet that extra money had to be made available for purchasing power repair, in March we came up with proposals ourselves and now, a week before we have to vote on the cabinet plans, we are told that in such a short time nothing is possible anymore,” says Klaver.

Kuiken: “If the cabinet really wants to improve purchasing power, then it is possible. We saw that in the corona crisis when entrepreneurs were rightly helped quickly. Now something can only be arranged again in 2023 at the earliest.”

The left-wing parties are also firing a warning shot if the cabinet plans for 2023 have to be voted on after Budget Day.

“If this is the way in which the cabinet deals with the opposition, then Rutte really has a problem. Then we will vote against the budgets when they are discussed in parliament in the autumn,” says Klaver.