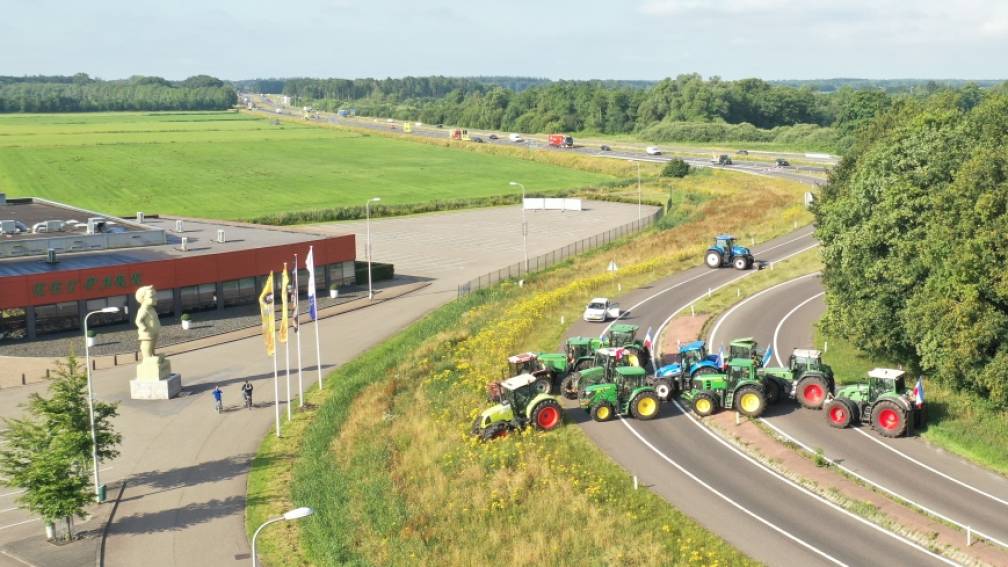 Protesters across the country are blocking distribution centers of supermarket chains. At Albert Heijn in Zaandam, Lidls in Almere and Oosterhout, all five Jumbo centers in the country and the smaller Boni chain in Nijkerk, tractors prevent trucks from loading and unloading.

A driver who is stuck at a distribution center in Nijkerk understands the emotions of the activists, but questions this form. “Whether the protest at this location makes sense? I think it’s doubtful,” he tells Omroep Gelderland. “They keep the protest tidy, but I would like to get rid of it.”

It is not yet known how long the actions will last. In various places, demonstrators express the intention to remain standing for days.

“The farmers themselves do not really have an expectation for how long they want to be here. Some people talk about the whole day, but I also heard about a week,” says RTV Drenthe reporter Mathijs Renkema. “Others said: we will stay here until the problem is solved.”

Visit from the police

It is not yet clear whether this is a boast. In any case, Renkema saw little preparation for a longer protest. “It’s not that they have a lot of provisions with them. I wonder how they want to last a week.”

“The farmers drink coffee and listen to mainly Dutch music,” continues Renkema. “They seem to be awaiting what’s to come, most likely a visit from the police.”

One of the farmers says that they also want to stay for days at the Albert Heijn distribution center in Zaandam. “We have agreed that we will go everywhere at once. The intention is that we will stay for three days.” By creating shortages in the supermarkets, the farmers want to emphasize the importance of their work.

“Rather empty the shelves than close the highways”, reasons this farmer:

‘We will stay here for three days’

In Zaandam the farmers were told by the mayor that the protest is prohibited in this place; they then move to the town hall in Haarlem. In Veghel, the mayor had the same message: in conversation with the farmers, he explained that demonstrations are allowed, but blocking is not allowed.

People can already notice the consequences of the blockades today, Marc Jansen, director of the Central Bureau for Food Trade, told NOS Radio 1 Journaal this morning. “Fresh products, bread, vegetables, fruit, people will have to miss out on that today because it would normally be delivered tonight and that did not happen.”

RTV Oost reporter Mark Bakker spoke to a truck driver at a blocked distribution center in Zwolle who hoped in vain to be on time early this morning. “He was hoping to unload his coffee and chocolate, but he is now queuing up here. It looks like he won’t be able to unload his load for the time being.”

The CBL calls on protesting farmers to immediately lift the blockades of distribution centers. The supermarkets emphasize that they are not a party in the nitrogen conflict.