Monster Hunter has always been about hunting. Without proper preparation, you couldn’t exploit your target’s weaknesses and the hunter quickly became the prey. Even with the best preparation, the hunt remained a slow and methodical affair. Every move was a risk. If an attack wasn’t deliberate, it was probably your last. In addition to skill, a player therefore mainly needed knowledge and patience. That made Monster Hunter a particularly tricky series to get into.

That inaccessibility is an issue that Capcom has been trying to address ever since. With each generation, the emphasis is less on knowledge and preparation, and more on the action. Rise makes the biggest leaps in that regard. The methodical hunt gives way to spectacular combat, where your hypermobile ‘hunter’ catapults through the air and attacks his prey (read: victim) with attacks that would not look out of place in a modern shounen anime. Sunbreak, the new expansion to Rise, continues that movement – and while that provides very satisfying combat, just like in Rise, it does lose some of the old MonHun charm.

New expansions in the expansion

Like every MonHun, Rise now has a ‘G’ or ‘Master Rank extension’. These expansions build on the main game by adding an extra rank to missions after low and high rank. That means more and more difficult monsters, extra gear, and new locations. This usually involves changes to existing systems and the addition of completely new features. This often doubles the amount of content of the base game. The same goes for Sunbreak.

First of all, of course, there is a new story. As in previous games, this comes down to a massive new monster disrupting the ecosystem, while Sunbreak’s story rarely gets very compelling. This time, however, it puts even more emphasis on developing sympathetic characters than Rise already did. Known allies from Kamuro and unknown characters from the new ‘Elgato Outpost’ all get a little more personality.

That extra personality now also comes to the fore in gameplay. You can take these characters on specific single player missions for the first time. Previously they could help during Rampage missions, but given that underused game mode from Rise is completely missing here, Capcom has promoted them to actual hunters. That works remarkably well. Your party members are skilled at combat, laying traps and sometimes even taking off for a while to return on the back of another monster to provide reinforcements. 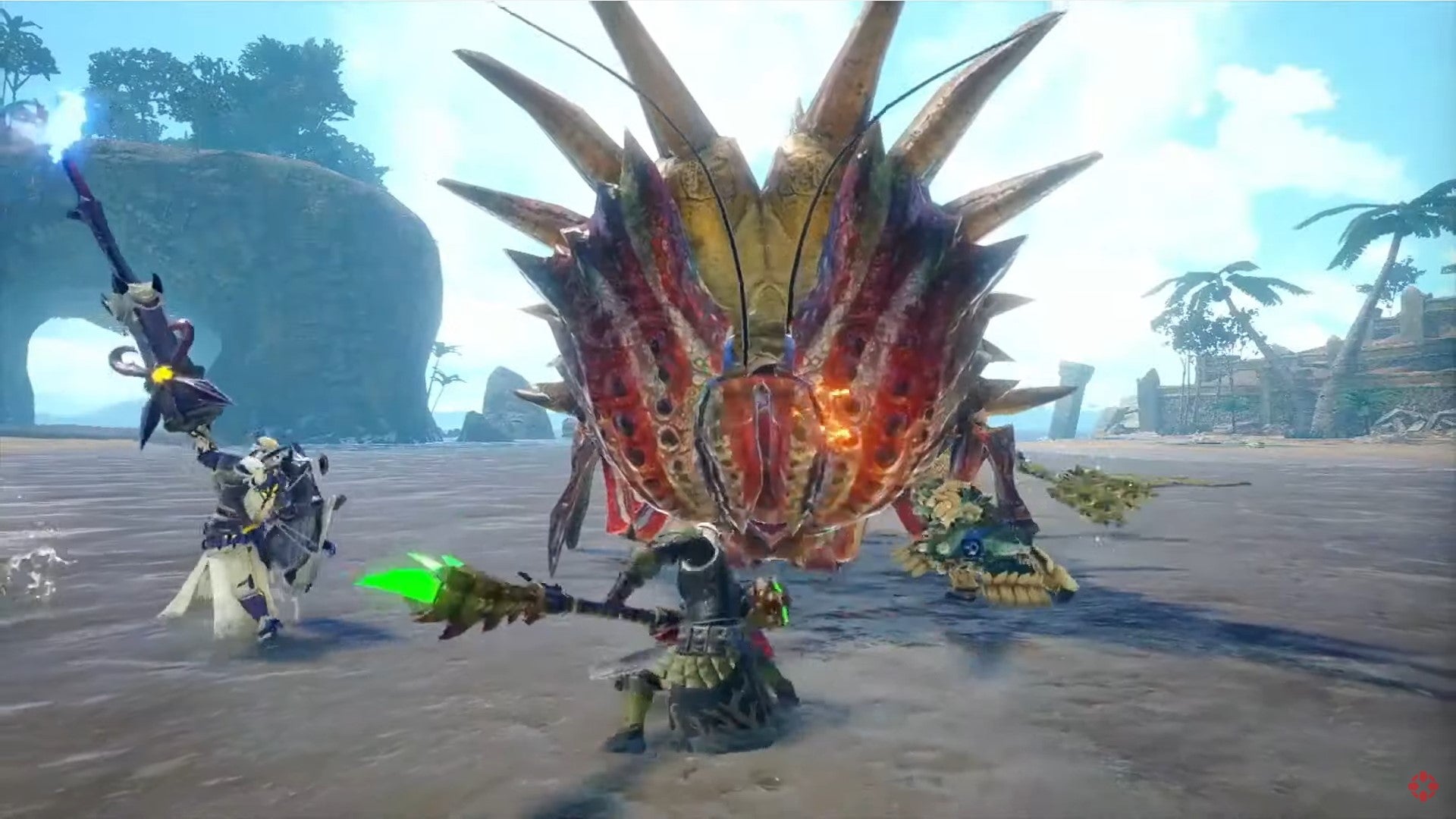 That’s actually the biggest addition (and removal in the case of the Rampage missions) that Sunbreak makes. Beyond that, it only builds on what Rise already did – especially in the power fantasy it portrayed. The enormous mobility, direct control over enemies, and the extremely powerful switching skills that sometimes made the action in Rise almost trivial, have only become stronger here. There are small changes like running on walls no longer costs a wirebug charge, and additions like new spiders with whose web you can send a monster a certain path. There are also special wire bugs that allow attacks from the back of a monster to deal even more damage.

The new skill swap system is by far the biggest contributor to that power fantasy. This allows you to take an extra variant for each slot of switch skills. As a Longsword user in Rise, for example, you still had to choose between an attack that generates your ‘spirit gauge’ or just spends it; now you can take both. Alternating those two skills is of course very strong and that feels incredibly satisfying. In combination with the number of new switch skills that Sunbreak introduces, you have an unprecedented number of ways to develop your character and playstyle the way you want.

That does not mean that Sunbreak offers even less of a challenge than Rise. To compensate for the increase in hunter strength and mobility, monsters have been made even faster and more aggressive. They also hand out debuffs that cleverly respond to your dexterity. For example, Gore Magala’s well-known ‘frenzy virus’ encourages you to take more risks, where the recurrent bleed effects force you to pause for a while. New monsters, such as the werewolf Lunagaron and the vampire-like Malzeno, deal with this in their own way. Some new Switch skills themselves play with that balance by rewarding you with more damage in exchange for less mobility. For example, think of stronger attacks with slower animations, or a stationary ring that makes your bowgun’s bullets stronger as you shoot them through.

All those ways to compensate for the extra strength and freedom of movement work, but not always well. For example, thanks to the extra aggressive monsters, Sunbreak is the first Monster Hunter since Freedom Unite where I was regularly knocked from full HP to zero in a series of attacks of which I could only have avoided the first. It didn’t feel right then, and it’s still frustrating today.

In addition, the extra emphasis on the enormously powerful Switch skills detracts somewhat from the weapons themselves. The switch skills are now so incredibly strong that normal attacks are almost something to keep you busy until you have a charge again to use the next switch skill. If you really want to get the most out of the game, Sunbreak offers a lot of complexity to master, no matter which weapon you choose. If you just want to finish the game, on the other hand, there are weapons where you can almost ignore the standard moveset. That was already a problem in Rise, and Sunbreak makes it worse. Fortunately, there is a lot of satisfying action against it.

All in all, Sunbreak offers more than enough cool battles and spectacular action to keep you entertained for tens of hours. Also, that action is now a bit more challenging than it was in Rise. Beyond that, unfortunately, it doesn’t do much to really distinguish itself from Rise. It even removes the unique but underused Rampage fashion that Rise introduced. Fortunately, the steady rhythm of chasing monsters to make cool hats is still very satisfying – all the more so because of the Switch skills that make Sunbreak even stronger. Unfortunately, every step towards spectacle comes at the cost of what once made Monster Hunter so special. The relatively clunky fun of Rise – and now Sunbreak – was a nice outing for the series. Still, I hope upcoming Monster Hunters don’t escalate further.